Located on the River Walk in San Antonio, the San Antonio Museum of Art has large collections of ancient Mediterranean art, Asian art and Latin American art as well as its renowned collection of regional works.

The San Antonio Museum of Art is located in the former Lone Star Brewery complex, where it has been since 1981. 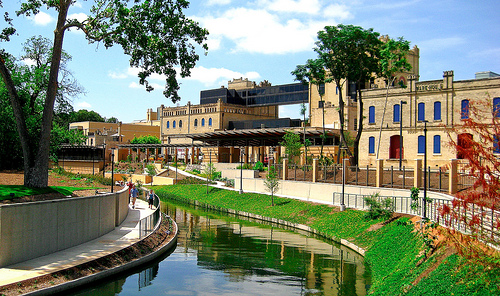 In the 1970s, San Antonio Museum Association purchased the historic Lone Star Brewery complex for conversion into the San Antonio Museum of Art. Following a $7.2 million renovation, the Museum of Art was opened to the public in March of 1981. In 1991, the 7,000 square foot Cowden Gallery was opened for changing exhibitions and, in 1994, the 3,000 square foot Beretta Hops House was renovated providing three classrooms for enriching art education programs. The Luby Courtyard was opened at the same time providing an appropriate outdoor space for family days and other art celebrations. In 1998, the Nelson A. Rockefeller Center for Latin American Art, a 30,000 square foot wing, opened to display Latin American art from all periods. In May of 2005, the new Lenora and Walter F. Brown Asian Art Wing opened.  It is a 15,000 square foot addition that makes the Museum the largest center for Asian art in the southern United States.
In May of 2009, the Museum Reach extension of San Antonio's famed Riverwalk was opened. To accommodate the Museum's new riverfront access, the Glora Galt River Landing, a shaded pavilion, esplanade, and terrace along the Museum's north side was built.