This historic home was built by enslaved laborers for businessman and politician Mathew Richey. The National Register of Historic Places nomination form places the first phase of construction as occurring in 1840, and today, this neo-classical home is one of the few antebellum structures in Newtonia to have survived both Civil War battles and an 1868 fire that swept through the town. Though some additions have been made through the decades, the house retains most of its original structure and character and appears much as it did in its Civil War days. Newtonia changed hands several times during the Civil War, and Ritchey's stately house often served as headquarters for officers of either side throughout the conflict (or as a hospital, if a battle had just occurred). Confederate troops fought in Ritchey's yard and stone barn during the First Battle of Newtonia, and the house was also the scene of one of the exploits of Belle Starr, a notorious female Confederate spy. The house museum features exhibits on the life of the Ritchey family and the Civil War era, and interpretive markers tell the story of the Civil War battles, of which about 20 acres are preserved around the house.

The Ritchey House as it appears today. The portico and balcony above are the only significant visible structural additions to the original 1840 building. 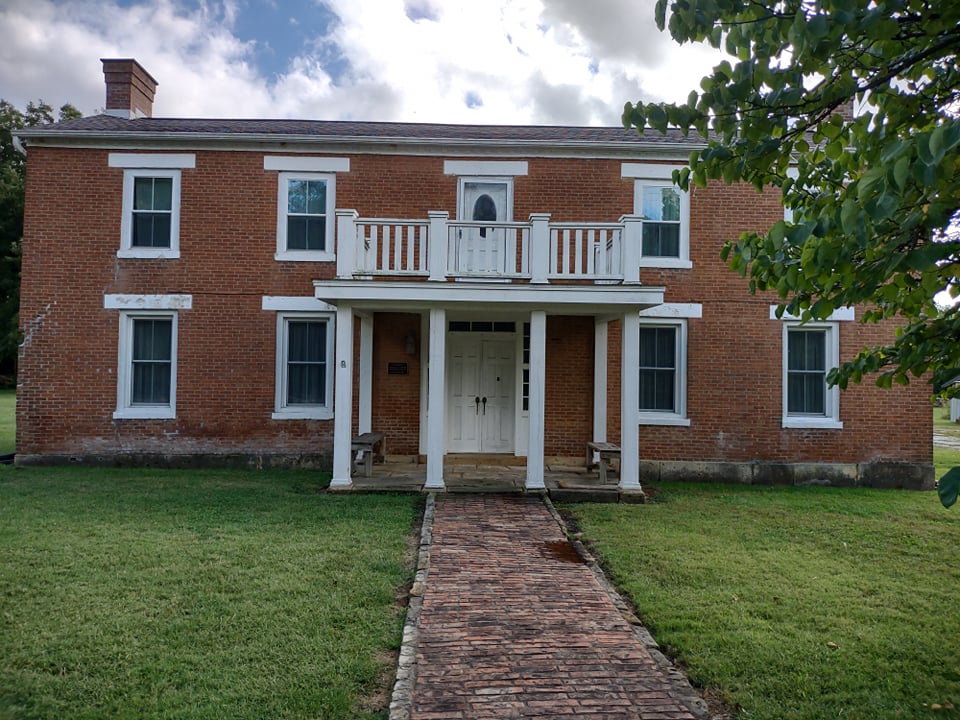 This roadside sign seems to contradict the year of construction listed in the National Register of Historic Places nomination form, which states that Ritchey built the home using slave labor from Tennessee in 1840. 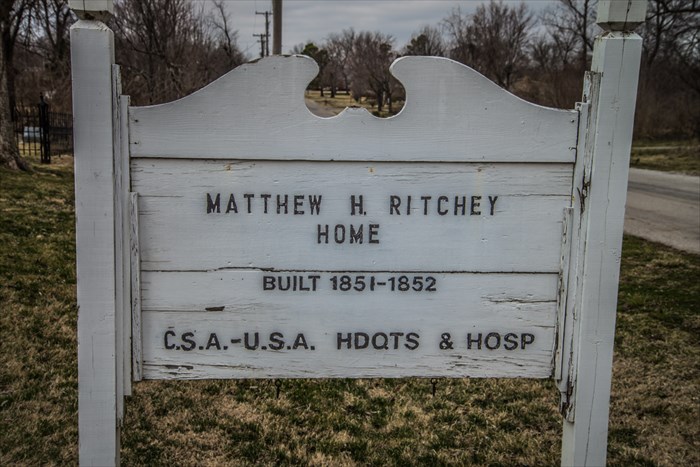 A map of the 2nd Battle of Newtonia supplied with Union General Samuel Curtis's report. Note the Ritchey House at upper right. Map provided by Craig Swain's blog "To The Sound of The Guns," cited below. 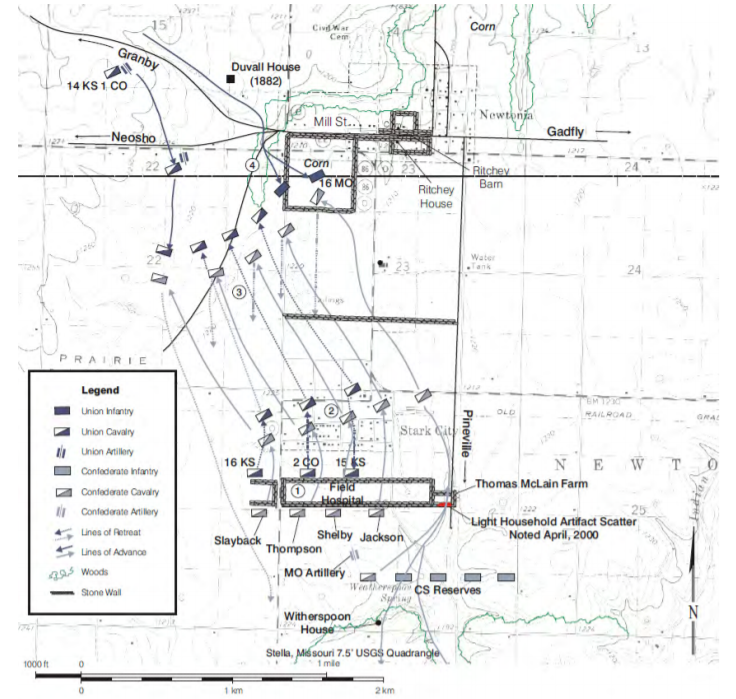 Born in Tennessee in 1813, Mathew H. Ritchey moved to Missouri in 1832, becoming one of the first white settlers in Newton County. Perched on the western edge of Missouri , Newton County bordered what was then Indian Territory, in present-day Oklahoma. Over the course of his life he played a prominent role in Missouri affairs, serving many terms as a judge, state representative, state senator, and even as a delegate to the State Convention of 1861, where he voted against seceding from the Union despite great opposition. Despite his sentiments as an ardent Unionist, his prominent house in Newtonia had been built using slave labor in 1851-52, and Ritchley owned slaves himself.

He spent the war commissioned as a Major in the Union Army, where he acted as an Assistant Paymaster. It no doubt dismayed him, then, that Newtonia was temporarily occupied by Confederate forces several times during the war, and that his house was used nearly every time as a headquarters or hospital--a scene that repeated each time Union troops held the town. Newtonia does not seem to have been garrisoned for the entirety of the war, but saw its share of military traffic due to Ritchey’s mill (useful for obtaining forage for the troops) and a lead factory in the nearby town of Granby, which served to supply bullets.

Though the town saw its fair share of small skirmishes, the First Battle of Newtonia occurred on September 30, 1862. Confederates occupied the quiet hamlet of 200 people three days before, shortly after the Battle of Pea Ridge. Concerned that this occupation would lead to Confederate incursions toward Kansas or Springfield, two brigades of Union troops under General Frederick Salomon attacked the Confederates, who took up defensive positions behind the stone walls around Ritchey’s barnyards, and within the stone barn itself. The battle seesawed for several hours as each side was alternately reinforced, but finally the Union attack broke. The First Battle of Newtonia may be the only Civil War battle outside Indian Territory to feature large numbers of Native Americans on both sides, including Cherokee, Choctaw, and Chickasaw, among others.

Ironically, the Confederates abandoned the town a few days later, and when Union troops marched in on October 4, they discovered

“on every hand the effects of the Federal artillery...There were dead horses all through town,torn by shells, and there were cannonball holes through Colonel Ritchie's (Ritchey's) house and barn, through the college buildings, and through other buildings in town.”1

As much as any town could be left alone in a state with divided loyalties, the next two years were relatively quiet for Newtonia. Confederates occupied the town in force again, however, as Sterling Price’s shattered Army of Missouri came through on October 28, 1864. After a monthlong campaign through Missouri in the hopes of seizing the state for the Confederacy, Price’s army had been crushed at Westport and Mine Creek, in Kansas, and were beating a hasty retreat back to relative safety in Kansas. Superior Union forces were hot on his tail, but a divided command structure rife with bickering between Generals Samuel Curtis and Alfred Pleasonton slowed them down.

Thus, Price had not seen Union troops in two days when he settled into Newtonia on the evening of October 27, and convinced himself that the Yankees had broken off pursuit. Thus he was in no hurry to break camp the following day, and gave his men time to rest. That afternoon, a strong Union force under General James Blunt, who had been a thorn in Price’s side for the last two weeks, caught up and attacked what he thought to be only a token Confederate rearguard a little southwest of Ritchey’s homestead. Instead, the Confederates outnumbered Blunt nearly two-to-one, and soon pushed back his rash assault and began to overlap his flanks. Blunt might have been routed from the field if not for the timely arrival of Curtis and a brigade of veteran Union cavalry, which soon smashed into the Confederate line and forced them to withdraw. Darkness saved the Confederate army from further pursuit,and Price marched hard to safe haven in Arkansas, marking the last major battle in the Trans-Mississippi Theater. While exaggerated casualty counts have tended to inflate the number of dead and wounded to 650 total (400 Union, 250 Confederate), confirmed Union casualties are no higher than 120, and the Confederates' unlikely to surpass 200. The Union wounded were treated at the Ritchey House.

Mathew Ritchey returned to his home after the war and would later found the town of Ritchey nearby, as well as amass roughly 1000 acres and significant properties in both Ritchey and Newtonia. He died in 1889.

The Mathew H. Ritchey House now operates as a museum showcasing the Civil War battles of Newtonia and items from the Ritchey family’s interesting life in what was then the western frontier of the United States. Through the decades, the house has always been held by owners sympathetic to the property’s historical significance, and has retained most of its antiquarian features. Today it is cared for by the Newtonia Battlefields Protection Association, which helps maintain roughly 20 acres of the battlefield site, 8 of which are open to the public, along with interpretive markers for visitors to learn more. The Association unveiled a new mural in 2010 celebrating the role of Native Americans in the first Civil War battle, painted by artist Doug Hall. The battle was also the subject of a PBS documentary the same year.

4. Grisolano, Greg. "Newtonia battlefield to be subject of PBS documentary." The Joplin Globe(Joplin), May 08, 2010. http://www.joplinglobe.com/news/local_news/newtonia-battlefield-to-be-subject-of-pbs-documentary/art...