Carrie Amelia Moore was born on November 25, 1846 four miles from this historical marker. Nation would become the most famous prohibitionist in American history, physically attacking dozens of saloons in addition to writing editorials and delivering lectures against alcohol. She is best known for wielding a hatchet which she used to smash saloons, but Carry A. Nation carefully cultivated this image to draw attention to her many causes, including equal political rights for women. Carrie Nation used sales of autographed hatchet souvenirs to finance her career as a travelling lecturer, in addition to paying many fines for destroying saloons even though she was careful to only attack establishments that were operating outside of the law. Today, Nation is the most famous individual associated with the temperance movement of the late 19th and early 20th centuries, a movement that included hundreds of thousands of women and men who persuaded hundreds of cities and counties to pass laws barring alcohol prior to the ratification of the 18th Amendment that barred alcohol nationally until the 21st Amendment reversed the 18th Amendment in 1933.

Carrie Nation carefully cultivated an image as a radical who physically smashed saloons in order to promote her lectures and other work. 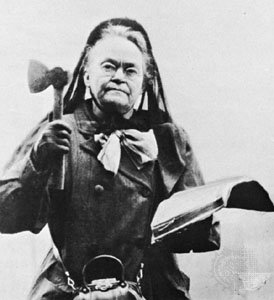 As a young woman, Carrie married an alcoholic. Her first husband Dr. Charles Gloyd died approximately two years after the birth of their daughter. Many believe that Carrie's radical actions against the alcohol industry were fueled by this loss. Based on her own words, Carrie certainly felt alcohol robbed her of a joyful family life. In addition, the burden of raising a child as a single parent could have attributed to her attitude toward women's suffrage.  Like many women of the era, Carrie could understand the importance of having the right vote as women were often left without a voice in society if unmarried or widowed. Carrie's work as a leader in the temperance movement supported suffrage while demonizing indulgence of alcohol.

Carrie later married David Nation giving her the famed name.  There has been some debate about the spelling of Carrie's name. The spelling Carry A. Nation was trademarked in Kansas by Carrie as a gimmick in her public speaking endeavors. The registered spelling was a play on words in reference to moving the nation toward a more morally centered society in line with the temperance movement.  David and Carrie bought a marital home in Medicine Lodge, Kansas where Carrie helped organize a local chapter of the Women's Christian Temperance Union.

It was in Kansas that Carrie's actions gained her notoriety and garnered her legal trouble.  Carrie began demolishing bars while spreading her message.  An incident at the Carey Hotel in Wichita, KS saw Nation destroy the bar with rocks and bricks nearly causing physical harm to some patrons.  She later began using a hatchet instead perhaps because she would be able to wield it with more precision.  The destruction of property landed Carrie in jail many times.  When she realized her association with the hatchet had become widely known, Carrie began selling souvenir hatchets to pay court fees and fines.