Pineville Chapel, since its construction in 1810, has been the centerpiece of the historic town. The wooden Episcopal Church is one of the four original buildings to have survived the arson of the town by the Union during the Civil War. The church exists now within the Pineville Historic District and is listed on the National Register of Historic Places.

The plaque added in 1992 when The Village of Pineville was added to the National Register of Historic Places. 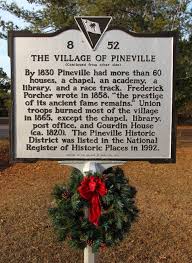 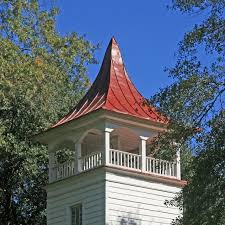 A souvenir ornament of Pineville Chapel, perfectly fit for the Christmas Trees made of pine. 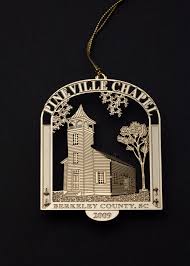 Pineville Chapel, as it stands today, seemingly untouched by time. 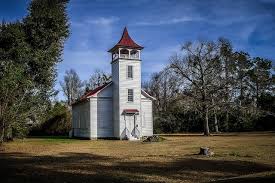 In 1791, Pineville began as nothing more than a racecourse for horses sheltered by the namesake pine trees that were believed to promote good health. The area provided a mild climate during the summer months in comparison to further south in the state and into Georgia. During the summer months, the wealthy plantation owners would leave their rice plantations ridden with mosquitoes for the more comfortable race-course at what would be known as Pineville.

The Birth of the Town

The race-course that attracted so many to Pineville spurred the creation of a Jockey Club in 1792, attracting more and more people to the area. The wealthy plantation owners continued to build their own summer homes in the area which was considered to be more serene than further south. In 1810, Pineville had its own Chapel, Library, and 60 households, as well as a school that attracted students from across the state. Plantations started around the town and it soon became and agricultural hub.

In a twist of irony, Pineville suffered from an outbreak of disease in the 1830s. Since disease was what many of Pineville's settlers had originally fled from, many continued the pattern and left the town in search of a new destination. While the outbreak was short-lived, the scare was enough to ward off a number of previous settlers, but many also returned to their homes. Pineville's population stagnated as other communities were founded and continued to do so well into the Civil War. During the Civil War, in April 1865, Union soldiers burned most of Pineville to the ground, sparing only the chapel, post office, library, and Gourdin House.

The land once occupied by the town of Pineville has stayed true to its use even to modern days. The chapel still stands as a landmark and much of the surrounding area is still used for local agriculture. Aside from the agriculture, the mild temperature of Pineville makes it an attractive location for hunters throughout varying seasons. On February 10, 1992, Pineville Historic District was added to the National Register of Historical Places.