This marker commemorates the legend of John Henry, "the Steel-Drivin' Man" who was likely a formerly enslaved Virginian who was among the hundreds of incarcerated Black men who died while building railroad tunnels in Appalachia. The legend of John Henry suggests that he was renowned during his life for his speed as a steel-driver and willingly worked so fast in order to defeat a new machine that might take his job that he perished from exhaustion. Recent work by historian Scott Reynolds Nelson reveals the likelihood that Henry was a real person who was incarcerated in 1866 and forced to build the C&O railroad along with other incarcerated men. Nelson's book suggests that the real John Henry died in 1870 while building a railroad tunnel, a tragedy that played out hundreds of times as the pace of work led to workers inhaling small pieces of rock left in the air after an explosion.

If this is the case, the Ballad of John Henry can be understood as a carefully hidden message by workers, reminding each other as they sing a song that appears to valorize Henry's commitment to slow their pace and take breaks. The ballad is slower than most work songs and could be understood as a reminder that the pace of work the bosses preferred would lead a man to an early grave. In an era with limited protections for many workers and no protections for inmates, a song reminding workers to control the pace can be seen as a protest against the exploitive nature of the convict labor system. Henry used a hammer and steel drill to create holes for explosives in order to create railroad tunnels. This dangerous work was often reserved for Black convicts, hundreds of whom perished from inhaling the fragments of rock that filled the air when they blasted tunnels.

Front of the John Henry marker which displays an overview of the folklore and its impact on history. 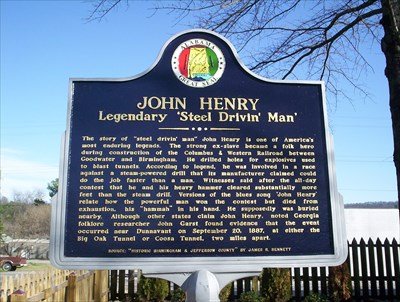 John Henry is believed to be a former slave who was arrested and placed in jail and forced to work as a steel driver for the railroad in the 1870s. Incarcerated African Americans were a leading source of labor in the dangerous work of building railroad tracks and tunnels through the mountainous regions of West Virginia, Pennsylvania, and Maryland.

According to legend, John Henry took it upon himself to race a crew working with the newly-invented steam hammer. Although the steam hammer was inefficient at this time, the legend suggests that workers like John Henry feared the loss of their jobs. Like all legends, it is unknown if this race actually took place or where it would have occurred and some argue that it happened at Big Bend in West Virginia or Lewis Tunnel, Virginia. Others suggest the race was held in Leeds, Alabama, at either the Coosa Mountain Tunnel or the Oak Mountain Tunnel of the Columbus and Western Railway. In likelihood, there was no race and the funeral song of African Americans that mentioned John Henry was not meant to praise the concept of working oneself to an early grave but rather a form of subtle protest.

The legend goes that John Henry was significantly faster than the steam hammer and all of the workers celebrated as he was victorious. However, due to exhaustion and stress, Henry collapsed to the ground with his hammer in his hand. The story of John Henry later became a folk tale that was popular among workers fearing the loss of their positions owing to mechanization.