Constructed in 1926 with its opening on New Years Day in 1927, this historic sporting venue is often referred to as "the Cathedral of College Basketball." The Palestra was one of the largest arenas in the world at the time of its opening and offered an innovative design that supported the roof without obstructive internal pillars. The area is the home to the University of Pennsylvania Quakers and owing to its longevity, has hosted more college basketball games than any other building. During the early years of college basketball, the Palestra was home to some of the best teams and hosted games of the Big 5 league which included Villanova, St. Joseph's, LaSalle, Temple, and the University of Pennsylvania. In 2000, the Palestra went under a $1.9 million dollar renovation.

An early photo of the Palestra and its innovative roof design that eliminated interior pillars that blocked the view of spectators. 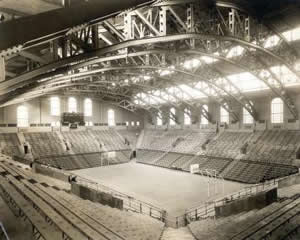 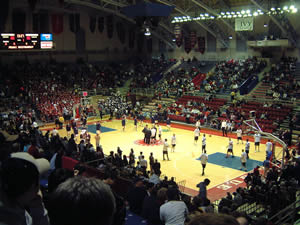 The Palestra received its name from the suggestion of  Greek studies Professor, Dr. William N. Bates. He said the name fit because just like in the ancient Greek times, young men would compete in a variety of event in a rectangular enclosure (a palestra) in which spectator would view. Over time it has received quite a few different nicknames, one being the “Mecca of Basketball." This nickname is a reference to the Muslim tradition that requires each individual the pilgrimage to their holy city once in their lifetime. Just like the members of that tradition must pilgrimage to their holy city, basketball fans made a point to visit the Palestra long after the University of Pennsylvania stopped being a dominant team.

The first game held at The Palestra between the Quakers of Penn and the Elis of Yale. The game was quite the barn burner. The final score was 26-15 in favor or the Quakers. This was the start of something very special. Throughout the years the Palestra has hosted some of basketballs biggest names. The likes of Wilt Chamberlain, Michael Jordan, and Kobe Bryant have all come to witness games at this legendary venue.

A 2005 poll conducted by ESPN asked college basketball experts to identify their favorite arenas and the Palestra was at or near the top of every respondent's list. Jay Bilas, a former Duke Blue Devil, said: “It is one of the true gems or the sports world, right up there with Wrigley Field.” Today the stadium holds a capacity of 8,700 fans which hardly compares to most of the other stadium mentioned in that list, but the historic value of the stadium makes up for its modest size compared to more expansive modern stadiums.

Author Bob Lyons explained the appeal of the arena. “You don't know what it’s like until you walk into the Palestra. You talk about the Field of Dreams in baseball, this was my Field of Dreams. The mystique of the place is unparalleled. When you first come through the doors there's a certain feeling that you get that just transcends the moment. Then you walk out on the floor and look up at nine thousand people, the scoreboard, the streamers, the fervor and fever in the stands, the intensity of the players and the coaches. There’s nothing like it in the world of sports.”

History of the Clubs

The Palestra was home to the Big 5 which included the local Philadelphia college basketball teams of Temple, Villanova, St. Joseph’s, UPenn, LaSalle with Drexel as an honorary 6th member. This profit sharing league was formed during the 1950s in order to create the finest city competition that would overshadow other famous rivalries like Army versus Navy and Harvard versus Yale. Most of the games between the teams were held at the Palestra until recently.

The Penn Quakers men’s basketball team is the fifteenth most winning men’s basketball program of all time. The program saw its greatest success in the early 1900s and from 1966 to 2007 when it dominated the NCAA's Ivy League.

During the NBA Lockout in 2011, many of the NBA’s stars graced the floor of the Palestra with their talents. A team that included LeBron James, Carmelo Anthony, and Chris Paul took on another team full of NBA Players from the Philadelphia area. Team Philly included Kyle Lowry, former sixth man of the year Lou Williams, and former rookie of the year Tyreke Evans. Despite LeBron and Anthony's team being loaded with the NBA’s perennial all stars, team Philly pulled out the win with the score of 131-119.

On February 20,1965, as St Joseph’s University and Villanova were preparing for a game, bomb threat forced the entire building to evacuate. Legendary broadcasted, Les Keiter, remained in the building to cover the event. This was a moment that ended up defining his career and his dedication to not only the Palestra, but to University of Pennsylvania basketball. Keiter goes on to say after being inducted into the Big 5 Hall of fame, “The 7 years I worked there, 3 nights a week; I wouldn't trade for anything in the world. And now to be joining the greats [as a Hall of Famer], my life is really, really complete.”

Last year Penn State gave up a scheduled home game to play in this historic venue. They did this in order to get a better grasp on the luxurious Philadelphia high school basketball recruiting scene. Penn State came out on top, beating Michigan State with the score of 72-63. After the game, Michigan State’s head coach, Tom Izzo, apologized to the fans. He said that his team did not deserve to be on the floor of such a historic building. The way they played did not play up the standards of the building, “… this was totally humiliating for me to be be in such a great city and a great basketball venue and I did not have my players ready to play.”

Feinstein, John. “At the Palestra, One Thing Is Clear: 'There's Nothing like Playing in This Place'.” The Washington Post, WP Company, 22 Jan. 2014, www.washingtonpost.com/sports/colleges/at-the-palestra-one-thing-is-clear-theres-nothing-like-playin....