This structure, built in 1907, possesses several distinct histories, most notably as the Webster Telephone Exchange Building (1907 - 1933) and later as the Great Plains Black History Museum (1975 - 2011). The building speaks to many aspects of history that influenced Omaha. Western expansion, urbanization, cultural and racial history, and changes in technology all have a hand in the story of the building found at 2213 Lake Street in North Omaha, Nebraska. 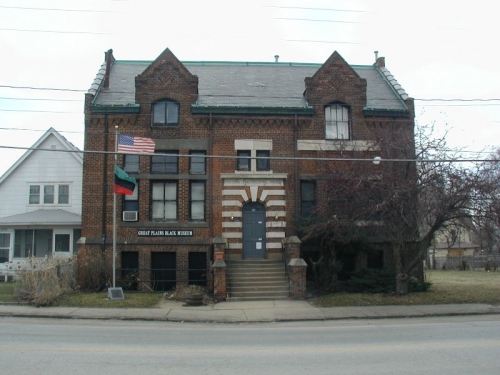 The thirty-three room Webster Telephone Exchange Building structure was built in 1907,  but it served many functions through 2001 when it was closed due to a belief the building required renovations. The two most notable residents of the building included its first resident and last residents, Webster Telephone Exchange and the Great Plains Black History Museum, respectively.
The building's initial existence as home to a telephone business marks Omaha's rise from a nineteenth-century Native American region to a launching point for Americans heading on Western Trails or towards gold rushes to finally an evolving urban center funded by numerous investors, especially those with interests in railroads, banks, and cattle. As such, the Omaha's significance grew (as did its population) substantially by the early twentieth century making it necessary for the construction of modern advances, including the telephone.
The nomination form sent to the National Register of Historic Places details the evolution of Nebraska's (and Omaha, in particular) telephone industry: "One of several exchanges throughout Omaha, the Webster Telephone Exchange was part of the Nebraska Telephone Co. system. Incorporated in 1882, the company had purchased the Omaha Electric Co., the first exchange in the state (1879). The Nebraska Telephone Co. had received from the American Bell Telephone Co. the perpetual right to use the invention of the telephone in the state. After the first decade of existence, telephone use increased rapidly, and the company was successful and the dominant telephone company in the state. Many of the exchange buildings, including the Webster Exchange (1907), were constructed in the 1905- 1915 period of intensive growth partially stimulated by the competition of the independent telephone companies. American Bell Telephone gradually purchased stock in the company until it gained full control in 1912."
In 1933, Webster Exchange donated the building the Mid-City Community Center, largely serving the needs of African Americans. Though African Americans enjoyed relative freedom in Omaha since arriving in the 1850s, racial tensions existed-- as it did in many places. In 1928,  African Americans created the Omaha chapter of the National Urban League.
By the early twentieth century, tensions mounted, largely due to labor tensions as African Americans often filled the voids of immigrants who went on strike (although African Americans were paid much less, and often faced difficulty in getting jobs without those opportunities). The tension rose to the point where most African Americans moved to North Omaha, developing a distinctly African American community.  Tensions came to a head in 1919 during a well-reported racially-fueled riot erupted, including an incident where some residents lynched an African American.
After serving numerous functions from 1950-1970s, including as an apartment building, the Great Plains Black Museum (or Black History Museum) took over the space in 1975, opening its doors to the public in February 1976.
The museum's central mission involved the preservation and enhancement of knowledge about the history and culture of African Americans in the Great Plains. The museum possessed more than 100,000 items, including more than 10,000 rare books, artifacts, documents and letters, magazines, diaries, and many other relics from Mrs. Bertha Calloway's private collection.
Though the building closed in 2001, a new board formed in 2010 to oversee the, hoped, renovation of the building and restoration of the museum. However, in October 2017, the Omaha World-Herald reported that the Museum will instead move to another building.  Information on that move can be found here: http://www.omaha.com/living/great-plains-Black-history-museum-moves-to-larger-space-in/article_4cbc0...