Tremper Mound is one of the best-preserved examples of a Hopewell Culture (100 B.C. to 500 A.D.) burial mound. Like many other earthworks and mounds, this site is in close proximity to a river and is located on a bluff which overlooks the Scioto River. There has been debate about whether this particular mound should be considered an animal effigy mound, known as a zoomorphic geoglyph, because of its unique shape, or whether this was a burial mound because of its use and contents. Animal effigy smoking pipes account for a large portion of the recovered artifacts, giving insight into the Hopewell people by both their use and the materials used to make them. The history of the mound and the artifacts removed from it are displayed at the Ohio History Center in Columbus, Ohio.

The Tremper Mound site was listed on the National Register of Historic Places in 1972. 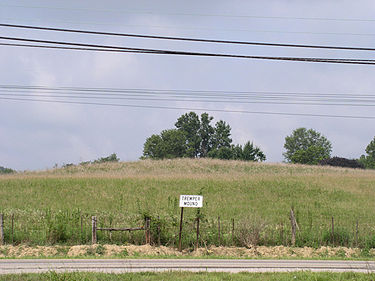 Expanded drawing with examples of found artifacts including earrings or plugs. 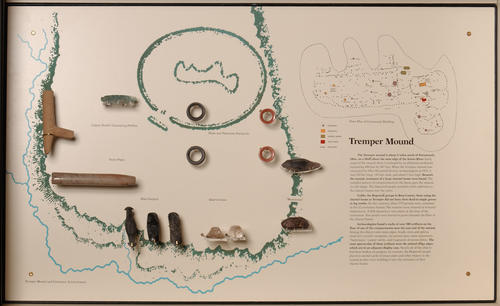 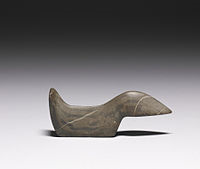 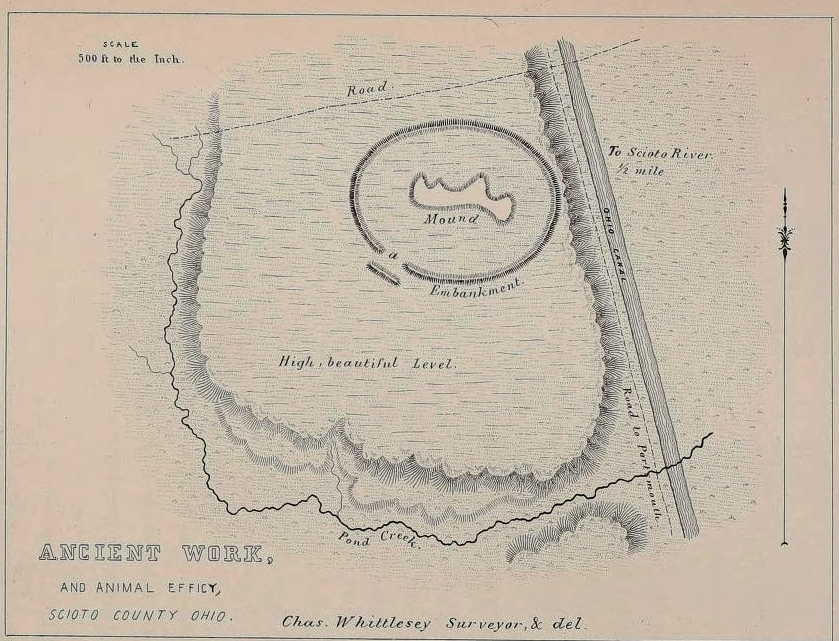 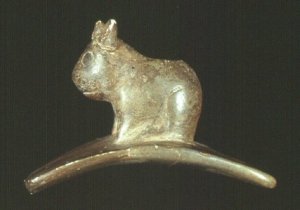 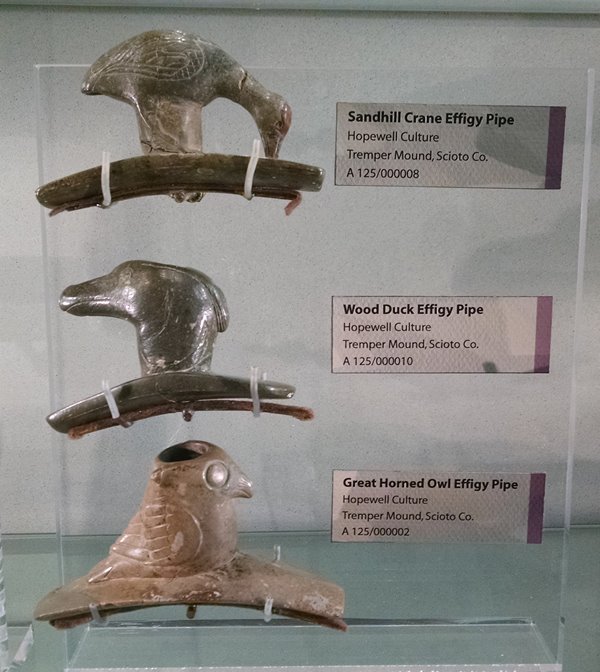 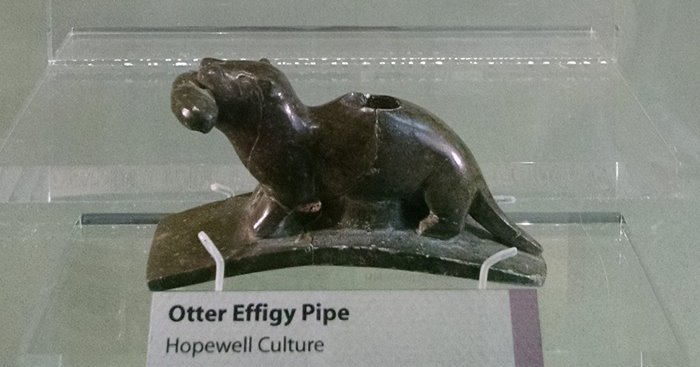 This particular ancient work is both a mound and an earthwork, or rather an earthwork containing a possible animal effigy mound. The earthwork consists of an almost elliptical enclosure, the longest axis being 480 feet, and its conjugate diameter measuring 407 feet. The embankment was approximately three feet high and had a base width of thirty feet when it was surveyed in 1846. The oval is incomplete, having a gateway in the south-eastern area measuring approximately 90 feet wide. There is a second small embankment that seems to guard the gateway and matches the three-foot height of the large embankment.

The interior of the embankment houses an oddly shaped mound that was excavated by the Ohio Archaeological and Historical Society. The original survey from 1846 has the mound at a height ranging from 1-8 feet with the smaller heights located at what would be considered the head and the four points of the legs. The 1915 excavation measured the mound at 250 feet in length, 120 feet wide, with a height of 5 feet. The shape of the mound has been compared to similar mounds found in Wisconsin.

Its irregular shape has been attributed to the structure contained within. This mound consists of a charnel house with multiple partitions. A charnel house is a place built with the specific intent of interring the remains of the dead. It has been found that burial mounds were built in sections with the main burial relating to a very important person, and as other celebrated individuals passed, the mound would be added to over time changing its shape or adding height in the case of many conical mounds.

Other burial mounds built by the same culture usually contain multiple burials with the individuals being separated and contained in a form of log tomb. This mound differs greatly not only in shape but also in the way remains were interred. Two people are buried in graves beneath the floor of the main burial chambers. It is assumed that these were the first burials. The main structure is divided into five burial depositories and contains twelve crematory basins. Approximately 375 people were cremated using these basins and then interred in four of the depositories with one standing empty.

There was also an extraordinary number of artifacts within the mound. One of the eastern chambers contained 500 objects which had been deliberately broken, possibly ceremoniously, rather than as a result of heat exposure. Records indicate that other mounds in the area located both charred and uncharred artifacts and textiles, meaning bodies were likely cremated elsewhere before burial; otherwise, no textiles would remain due to the high heat needed for the bodies. Then, after burial, a second or “final” ceremony was held, where the body and textiles were again burned, with some artifacts being added afterward. Tremper Mound differed from the other mounds in the area in several ways. Not only were charred textiles the only ones located, but archaeologist William C. Mills, who led the 1915 excavation, never recorded the idea that this may have meant the bodies were cremated elsewhere. The mound was also unique in that ashes from the cremations were placed into communal depositories, as well as those artifacts of the dead being placed into common caches. The burial of the cremated was also located beneath the base of the mound.

It contained 136 smoking pipes, with 90 of those being animal effigy pipes, some carved into birds including waterfowl like herons, cranes, and even predatory birds like owls and hawks. Other pipes were shaped like turtles, otters, beavers, bears, and wolves. These were thought to have been symbols of guardian animals and possibly smoked during rituals. The Hopewell culture of pre-contact Native American people, named after a burial mound earthwork complex on the farm of M.C. Hopewell in Chillicothe, Ohio, were praised for trade in exotic materials from North America. While they were centrally located in Ohio, they were also found in Missouri, Illinois, Indiana, and New York, and the pipes were representative of that. Originally, it was thought that they were carved from kaolinite, which is easy to work with and nearby, since the pieces were so detailed the subspecies of animal or whiskers on the faces could be distinguished.

It was later made evident that many of the pipes were made of a pipestone known as catlinite, a red argillite from Minnesota. Testing then also revealed that some of the stone was quarried locally while other pipes were made of Sterling pipestone that hails from northwestern Illinois. This again shows the long stretching trade route that had been established or continued by the Hopewell people, remembered for their geometric earthworks and their trade of obsidian, copper, mica, and marine shell used to create funerary and other useful items.