Consisting of 48 arches that span 70-feet each, the Rockville Bridge was completed in 1902 and is still thought to be the longest stone masonry arch railroad bridge on the planet. At 3,820 feet, it spans the Susquehanna River about five miles north of Harrisburg, Pennsylvania and is still used by the Norfolk Southern Railway and Amtrak. It was constructed by the Pennsylvania Railroad after both the frequency and weight of its trains increased along its Philadelphia to Pittsburgh mainline at the turn of the 20th century. The bridge was added to the National Register of Historic Places in 1975.

A train makes its way across the Rockville Bridge's 48 arches all with 70-foot spans. 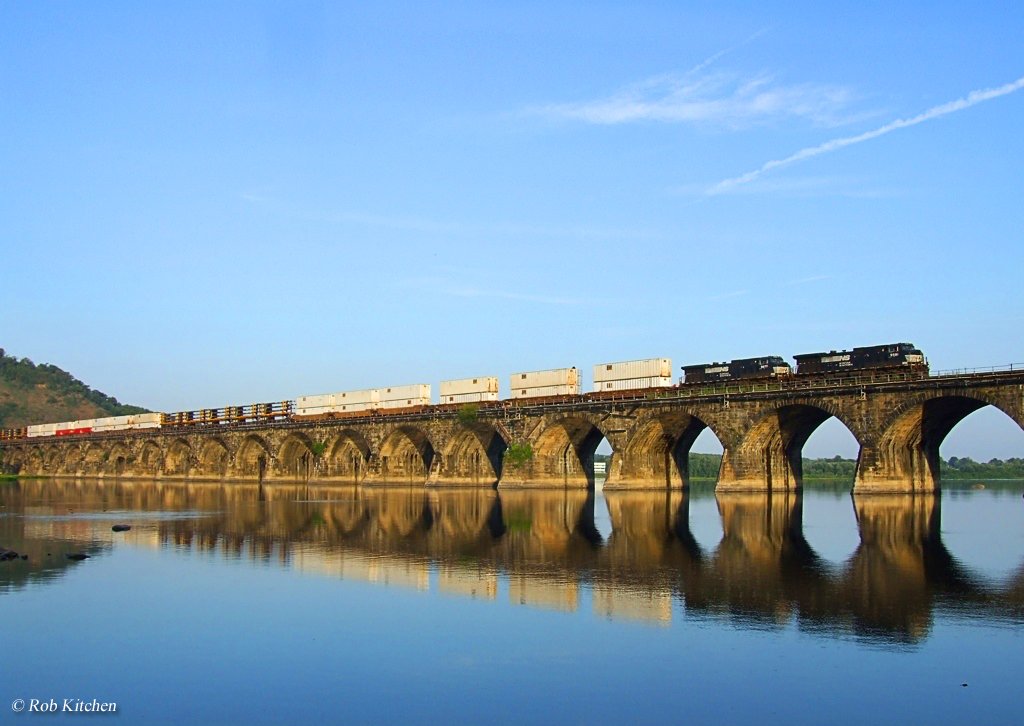 Looking west across the Rockville Bridge towards Marysville, PA. The small islands to the right are all that remain from the previous bridge. 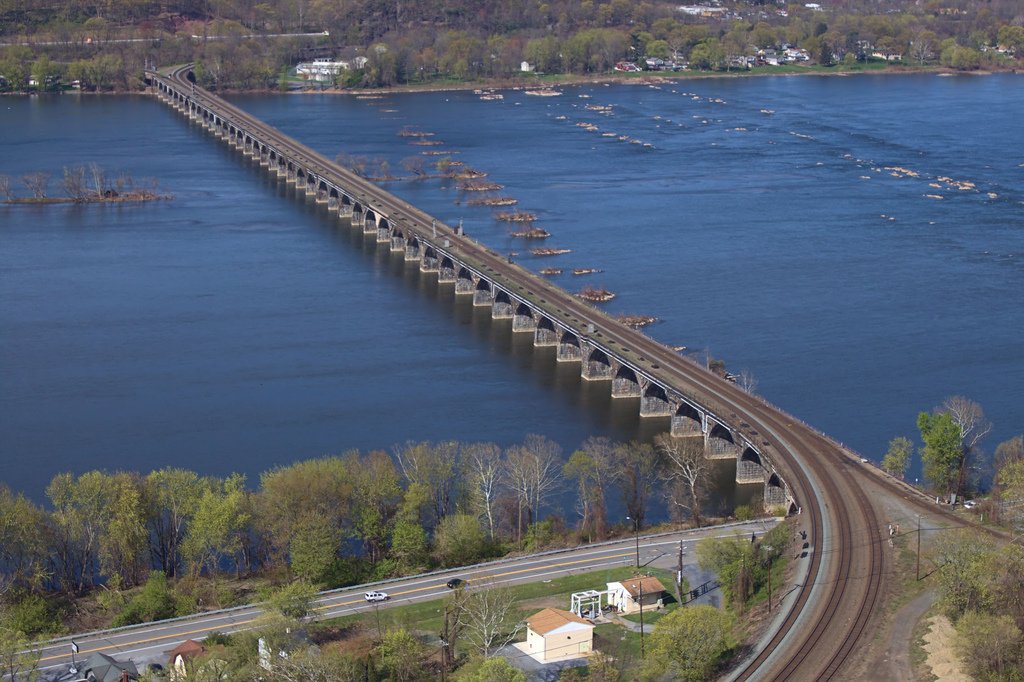 This iron truss bridge was only in service for just over 20 years before it was replaced with the Rockville Bridge. 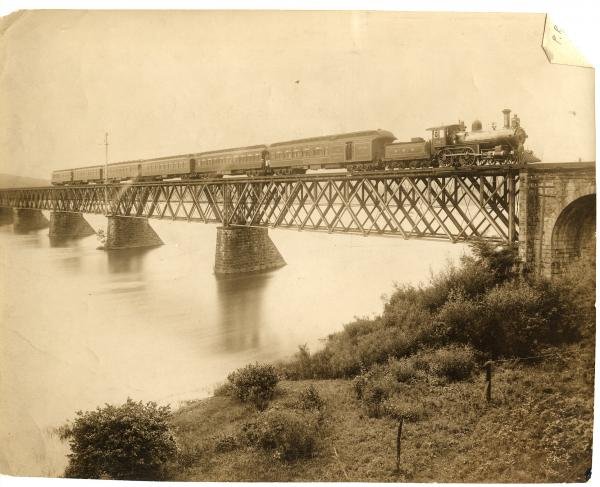 The old bridge was still used while the new bridge was under construction. 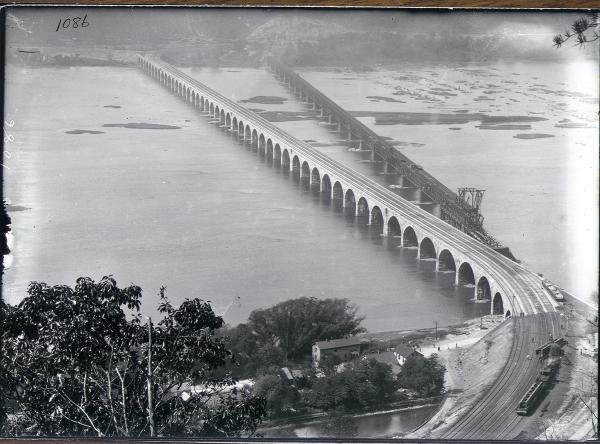 A view of the Rockville Bridge from the river during construction. 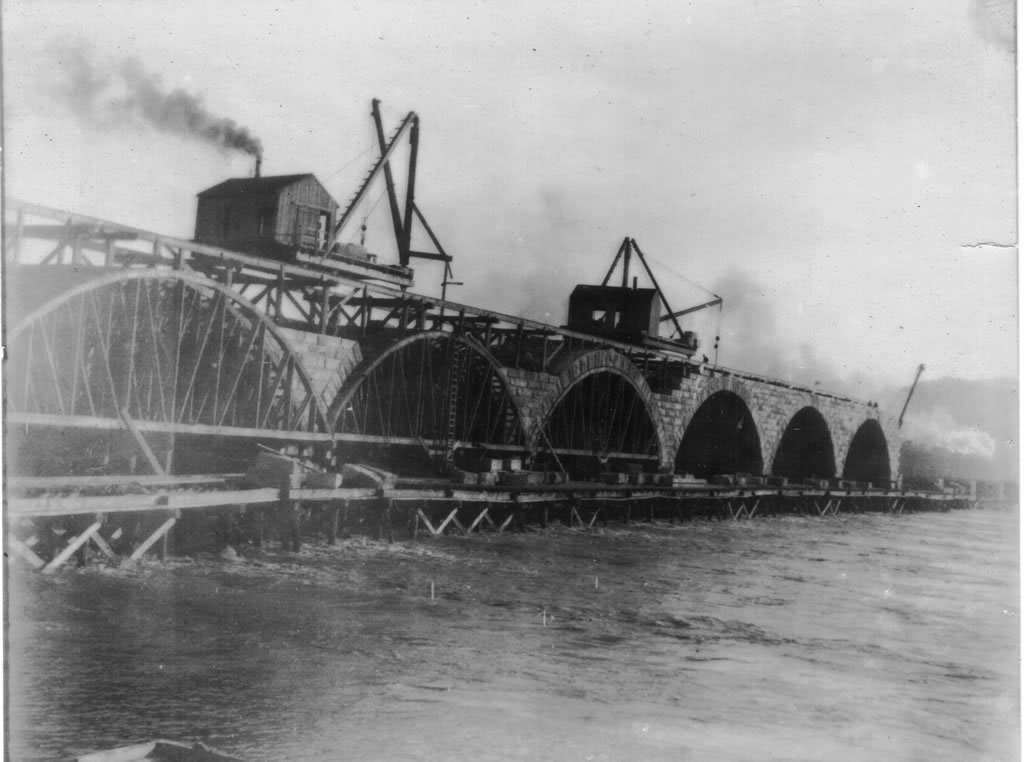 The first railroad bridge at this location was of a wooden Howe truss design that was completed in 1849 that, surprisingly, remained in service until a double-track iron replacement was built in 1877.  However, as the number of trains crossing this bridge increased as did the weight of their loads, the Pennsylvania Railroad’s Chief Engineer, William Henry Brown, decided to replace it with a more permanent stone and concrete structure.  He, and Assistant Engineer H. S. Righter then designed the current 48-arch structure.  Their new bridge would be 52-feet wide in order to accommodate four tracks and the arches would be divided into six groups based upon the size of their abutment piers.  Most of the abutment piers are eight-feet wide, with every 8th abutment being 19 -feet wide to strengthen the overall structure and increase stability.

The Pennsylvania Railroad then contracted with two Philadelphia construction companies, Drake and Stratton to build from the eastern side of the river and H. S. Kerbaugh, Inc. to work from the western side.  Construction began in 1900 and was overseen by Assistant Engineer George Nauman.  The companies employed over 800 workers, many of them Italian immigrants, to include 300 skilled stone masons, to complete the bridge over the course of two years.  These workers used over 270,000 tons of sandstone mined from quarries located around Curwensville in Clearfield County, Pennsylvania.  They also filled the abutments and spandrel walls with over 600,000 barrels of concrete to increase the pace of construction and lower costs.

The Rockville Bridge was completed in 1902, at a total cost of approximately $1 million, and has remained in service, with few renovations or alterations, ever since.  During the World Wars armed guards patrolled the bridge as it was thought to be an enemy target.  It gained recognition when it was featured in the Pennsylvania Railroad’s popular wall calendar in both 1925 and 1926 it has survived numerous floods to include those of 1936, 1972, and 2010.

One of its lines was removed in the 1980s and another was eliminated after an intermodal shipping container was blown off a train and into the river in 2010.  In 1997, a spandrel wall at pier 19 failed after it was weakened by the numerous freeze-thaw cycles it had endured and a heavy coal train rolled overhead.  Tons of stone, coal, rails, ties and four hopper cars plunged into the river.  It was then repaired with reinforced concrete and finished with a surface that resembles the stone around it.  Today, the Rockville Bridge still carries hundreds of trains per year across the Susquehanna River and should do so into the foreseeable future.