Coca-Cola Park is a minor league baseball stadium located in Allentown, Pennsylvania. The Park is home to the Lehigh Valley IronPigs, who have been affiliated with the stadium since its completion in 2008. Prior to the construction of this stadium, affiliated baseball was absent from the Lehigh Valley for approximately forty-eight years.

Coca-Cola Park, home of the Lehigh Valley IronPigs, had its inaugural season in 2008 when the stadium officially opened for business. 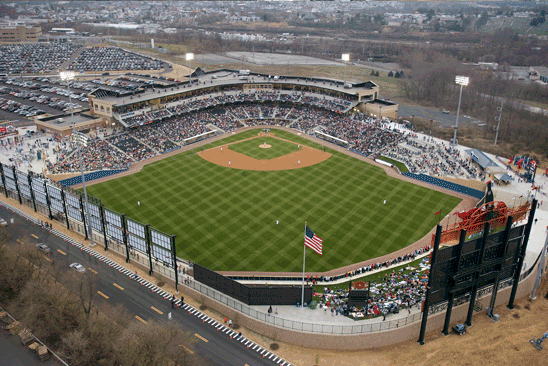 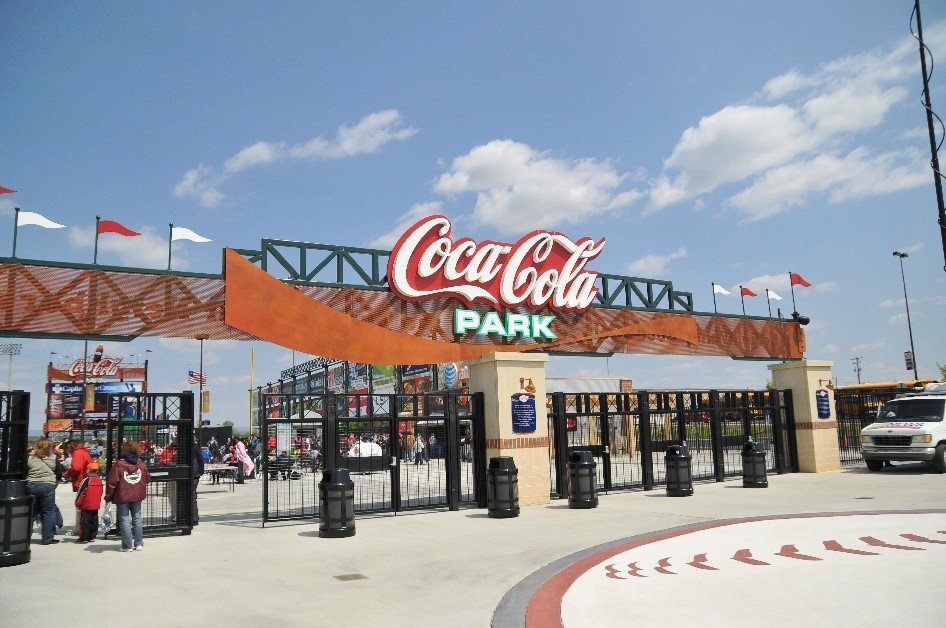 The Groundbreaking ceremony for the stadium took place on September 6, 2006. Donald Cunningham, president and CEO of the Lehigh Valley Economic Development Corporation, was joined by ten other government officials and private backers, as they dug their shovels into the dirt, signifying the start of a new era for baseball in the Lehigh Valley community.

In the decades leading up to the groundbreaking ceremony, several people and organizations made attempts to bring minor league baseball back to the area. Craig Stein and Joseph Finely, co-owners of the IronPigs, were the two men who made the footing of this project possible. Stein had a very impressive record of success with owning other baseball teams, such as the Reading Phillies; and was known to be especially talented at drawing business and large crowds. Alone, he was unsuccessful in bringing the minor league team to the area in 1994, but together, the dynamic duo was finally able to make this dream possible.

Due to their ties with the Philadelphia Phillies, the pair was able to bring the Phillies’ Triple-A affiliate, the Ottawa Lynx, to the Allentown area. The name “Lehigh Valley IronPigs,” was submitted by Ron Steele of Northampton PA. Steele stated that he came up with the name when he was thinking about the area's steel-making history. He made the connection that steel is made from refined pig iron, giving him the idea to connect the animal to the name. He imagined that the logo would be a pig swinging a bat shaped like an l-beam. 3,500 entries for name ideas were submitted through the “name-the-team” contest, which was sponsored by The Morning Call. Co-owners Stein and Finley narrowed the names down to eight—one of those being the IronPigs—which overwhelmingly was the popular choice.

The stadium name “Coca-Cola Park”, was made possible through a ten-year deal with the local Coca-Cola bottling company, located in the Lehigh Valley. The deal formulated the business to become the first Coke company in the United States to acquire naming rights to a sports complex. This past winter it was announced that after 100 years of business, the local bottling company will cease making soda, although distribution will continue locally. According to “The Morning Call,” there was no information at the time regarding the effect of the closing, on the company’s naming rights. As of now, the name of the stadium remains to be “Coca-Cola Park” (Salamone, 2017).

HOK Sport, which is now referred to as “Populous,” was the architectural firm hired to build the stadium. Contractor Alvin H. Butz Inc., was hired as the construction manager for the job. The $50.25 million project took a total of two years to complete, and remains as one of the most expensive ball parks ever built in minor league history (Lehigh Valley IronPigs). The stadium has a capacity of 10,178 people, and includes 8,278 seats, and 24 suites. There is also a picnic area and kid zone, to provide a variety of fun for all ages. The supersized scoreboard has a 50’ x 22’ LED video screen embedded into it, and a Coca-Cola bottle on top which shoots fireworks out of it on special event nights.

Although Coca-Cola Park is equipped with all the bells and whistles that make a baseball stadium exciting, the factor which seems to draw the largest crowds to the field, is the food. Given that the mascot of the team is the IronPigs, it was determined that pork products would be included in the stadiums signature dishes. Some of the famous dishes include the “big porker sandwich,” and the “nacho porker.” Adults of legal age can enjoy their drink of choice in the “Beer Garden,” a secluded section away from the crowd where alcoholic beverages are served. Fans and reporters have repeatedly referred to the stadium as “the best smelling ball park,” because of the cinnamon roasted nut stand, which can be found behind home plate (MiLB, 2015).

The stadium also holds a variety of events each season that are very popular among the local community. The Lehigh Valley Food Truck Festival is an event that takes place on the baseball field. Up to forty local and regional food trucks attend, offering a variety of delicious options for their consumers. On July 4th the park holds “Fourth on the Field”, which includes a spectacular firework show to celebrate our country’s independence.  The Lehigh Valley Craft Beer Festival, and Lehigh Valley Cider & Wine Festival, are two more events that occur which allow the community to have fun, while getting a taste of the locally produced beverages. The park is also available to rent for private events such as company picnics, benefits, parties, receptions, and more. The stadium is also equipped with a full-service catering menu that provides food choices for breakfast, lunch, and dinner (MiLB, 2015). For the past three years the stadium has also held the annual Bacon 5K Challenge, presented by Toyota. The challenge is a 5K race which includes an eating contest at the race’s halfway point, where contestants are challenged to eat a half a pound of bacon before continuing to finish the race. At the end of the race participants are treated with a bacon and eggs breakfast along with juice and fresh fruit. Entry fees cost $39 to join the 5K race along with the bacon-eating portion, however people can choose to join only the race or the breakfast, at a lower cost (Bacon 5K Challenge, 2017). No matter what the occasion is, Coca-Cola Park is a place that provides a variety of fun for people of all ages and interests.

Since the team's inaugural season in 2008, the stadium has received several recognitions each year for service, quality, business skill, attendance, and more. To name a few; in 2008 they were awarded Ballpark of the Year and Organization of the Year by Ballpark Digest. In 2009, 2010, 2011, and 2012 they were granted the title of the Highest-per-game average attendance in all of Minor League baseball (second highest in 2009). This was an astounding recognition not only because it was four years in a row, but also because it occurred in the first five years that the park was in service. In 2011and 2012 they were awarded the Highest Attendance in all of Minor League Baseball at 628,925 for the 2011 season, and 622,421 for the 2012 season. From 2013 to the present the stadium has dropped minutely in attendance, but they continue to be recognized for other key attributes. In 2015 they were granted #1 Ballpark in Triple-A by Ballpark Digest, and in 2016 they were awarded the Longest active streak of 600,000 or more fans annually in Minor League Baseball for their attendance in the past nine consecutive seasons (MiLB, 2015).

By taking a glance at how successful the ballpark has been in its first decade of business, it is easy to suggest that the park will only continue to grow from here. Through the building of Coca-Cola Park, the Allentown community was granted with the gift of baseball again, and a way to enjoy America’s pastime while coming together as a community.