This is a contributing entry for Women's History Tour of Washington, D.C. and only appears as part of that tour.Learn More.

The Women's March on Washington took place on January 21, 2017, the day after Donald Trump was inaugurated as President of the United States. It was the largest single day of protest in American history. What started as a Facebook post quickly spread to other social media sites and gained its footing as an organized, grassroots event. The Women's March aimed to raise awareness of the social, cultural, and political issues facing women today. While approximately half a million people attended the protest in Washington, between 3.3 and 5.2 million people participated in sister marches across the United States and thousands more participated in sister marches around the world. This location marks where a stage for speakers and performers was set up.

Protesters lined up the National Mall. 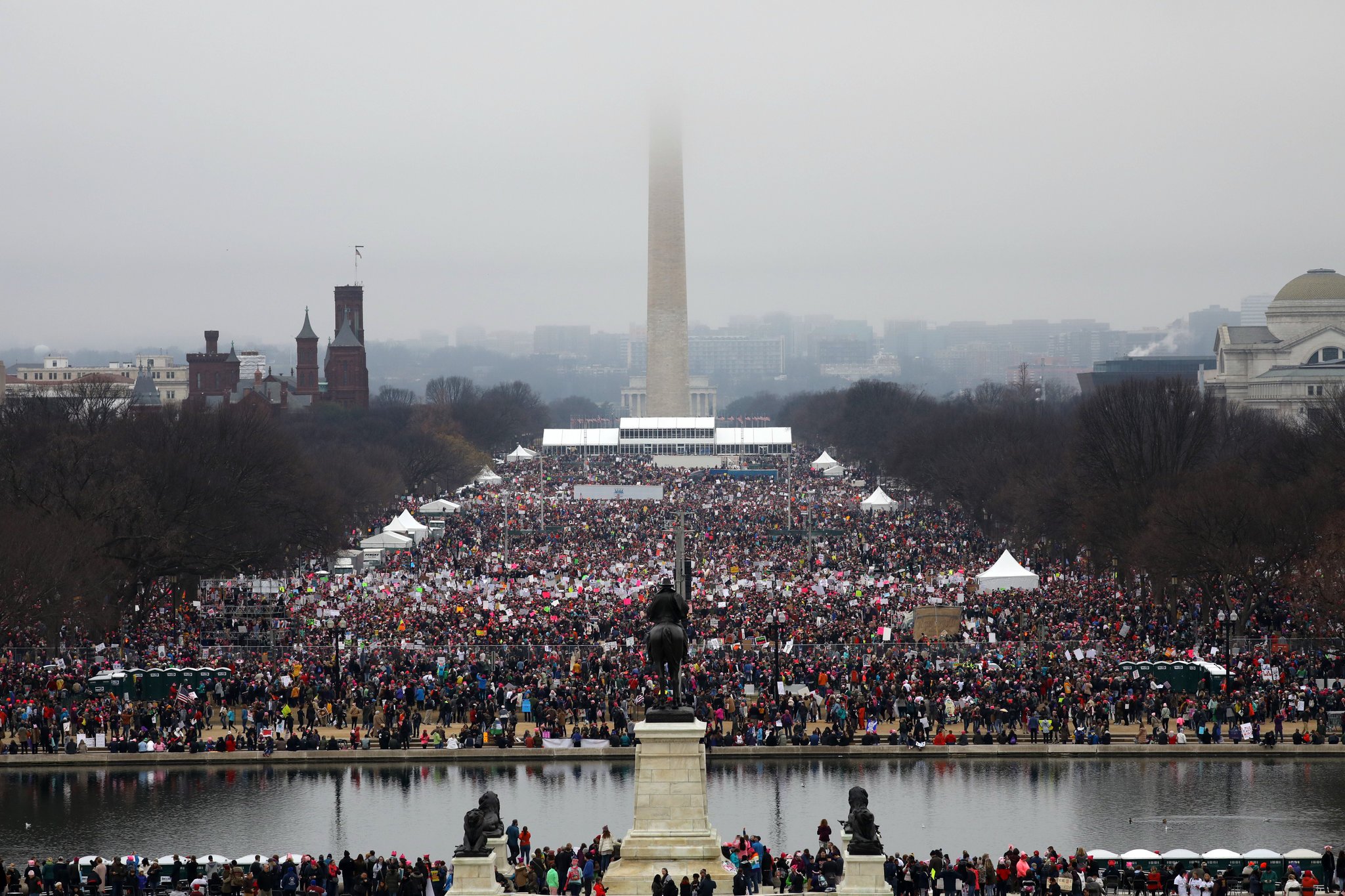 Demonstrators march along Pennsylvania Avenue, with the Capitol Building in the background. Wikimedia Commons. 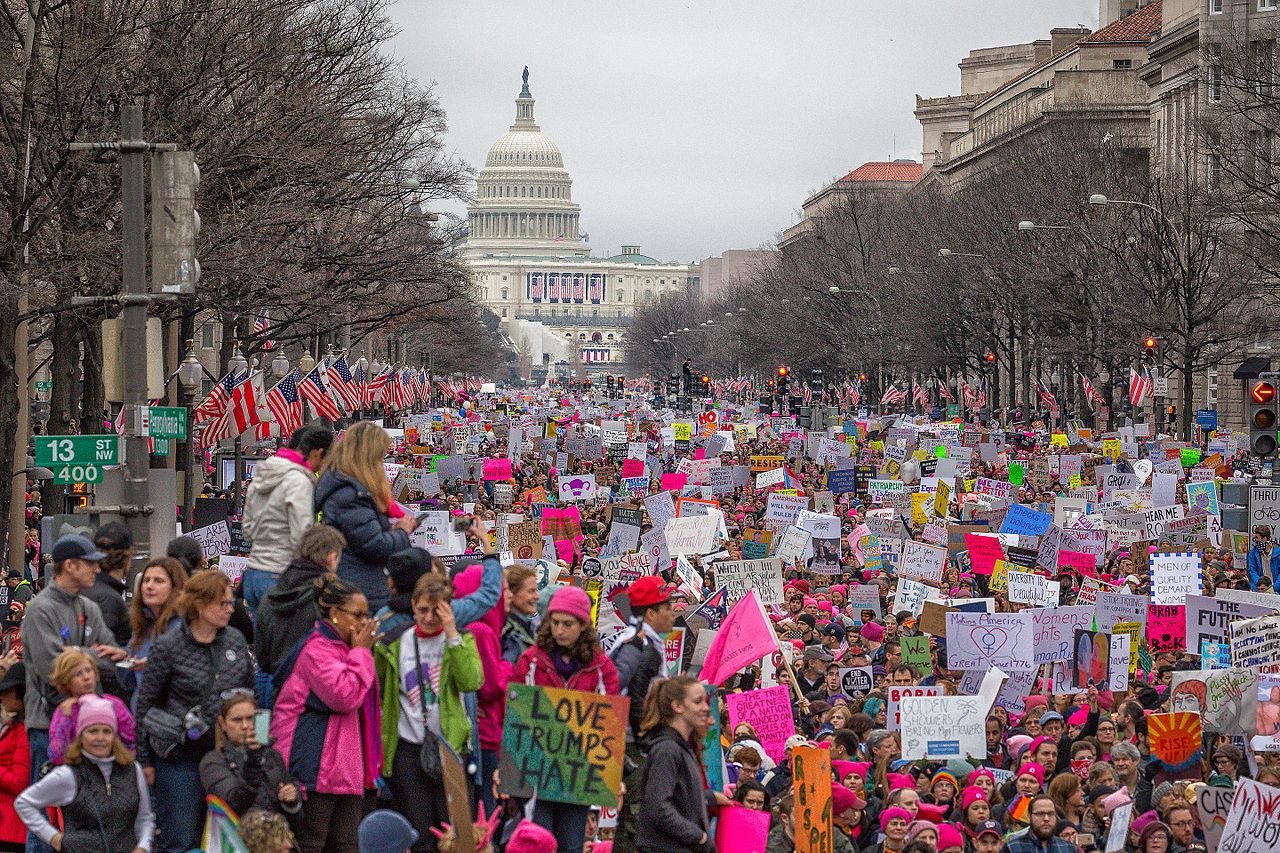 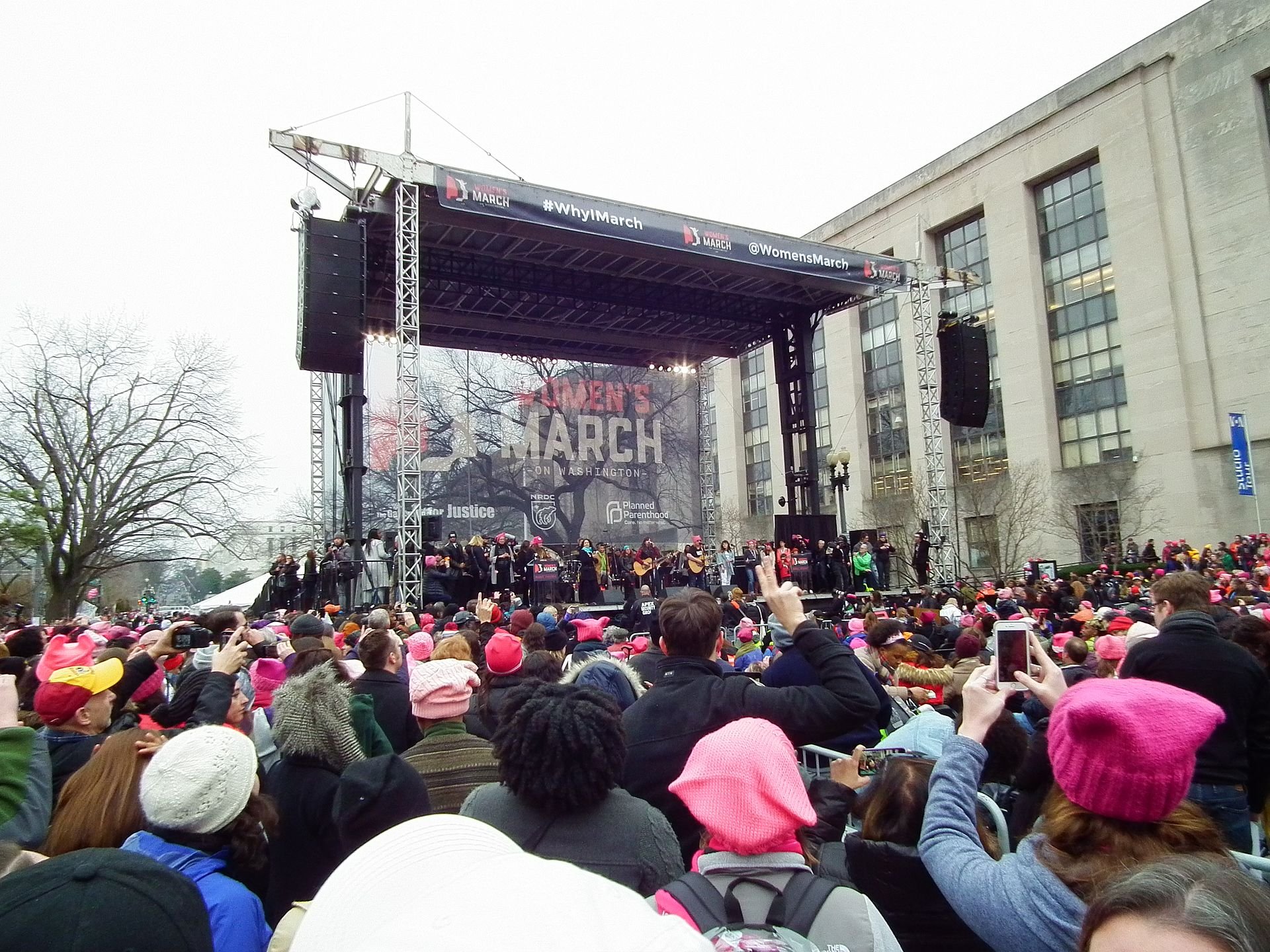 Over the course of three months of planning, the Women's March made formal arrangements with the city of Washington and clarified its message and purpose. In particular, the Women's March advocated for women's rights and gender equity, along with the intersections of gender with race, ethnicity, religion, healthcare, sexuality, age, and ability. While these issues emerged in light of Donald Trump's political views and personal controversies, the Women's March asserted that its goal was not to target President Trump, but rather raise awareness of the broad social, cultural, and political issues that the country faced. The Women's March called for anyone, regardless of gender, to participate in the event in a peaceful manner.

Protestors descended on Washington in the days before the presidential inauguration on January 20, 2017. Around 200,000 people were initially expected to attend the Washington protest, but this number exceeded expectation with around half a million individuals crowding the streets around the National Mall on January 21. A stage was set up between 3rd and 4th Streets on Independence Avenue, facing Northwest. The stage welcomed dozens of speakers, almost all of whom were women, along with performers. President Trump did not confront the protestors and instead attended the National Prayer Service at the National Cathedral, in the opposite direction of the march. Many protestors wore pink hats called "pussyhats" and held signs with powerful messages.

Between 3.3 and 5.2 million people nationwide marched that day, making it the largest protest in American history. The Washington Post estimated 653 reported marches across the United States, some reaching the hundreds of thousands in cities like Los Angeles, Oakland, San Fransisco, New York, Chicago, Denver, Seattle, and Boston. Substantial marches also reached less populated areas like Wyoming and Alaska. The message of the Women's March also reached other countries. Around 261 marches, according to the Washington Post, took place in countries "from Antarctica to Zimbabwe."

Chenoweth, Erica and Jeremy Pressman. "This is what we learned by counting the women's marches." The Washington Post. February 7, 2017. Accessed December 2017. https://www.washingtonpost.com/news/monkey-cage/wp/2017/02/07/this-is-what-we-learned-by-counting-th...