The Tillamook Rock Lighthouse sits on a massive basalt rock, a little over a mile away from the coast of Oregon. Construction for the lighthouse began in 1879, but was not completed until 1881. Surveying the rock and leveling the rock took quite a bit of time due to the dangerous storms, and transportation struggles. The actual building of the lighthouse did not begin until 1880. Men were then tricked into being hired for the construction because of how dangerous it could be. The lighthouse was used from 1881 to 1957, and the primary use was for navigational purposes. In the end, the total cost for the lighthouse more than doubled, than the original set budget.

Construction for the Tillamook Rock Lighthouse began in 1879, but was not completed until 1881. 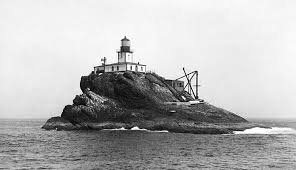 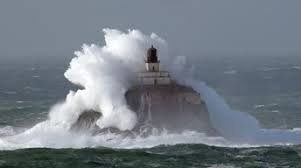 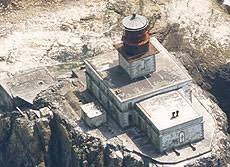 The lighthouse sits on a basalt rock, 1.2 miles off the coast of Oregon. This location was the second choice of the lighthouse. Developers originally wanted the lighthouse to be at Tillamook Head, but that area was to foggy. 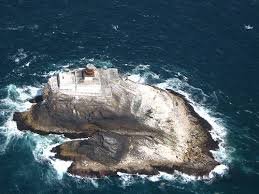 In order to transport supplies to lighthouse, during construction and to the keepers, they have to create a pulley system on the rock. 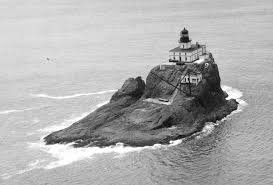 Tillamook Rock Lighthouse is located about one mile offshore from Tillamook Head, in Oregon. Plans for the lighthouse began in 1878 when Congress allocated $50,000 for the lighthouse to be built. Initially, the plan was for a 1,000 foot-high lighthouse to be built on the Oregon coast, at Tillamook Head. This planned was revised when developers realized that the head was usually covered in fog. Developers considered Tillamook Rock. In June 1879, H. S. Wheeler traveled out to Tillamook Rock to decide if a lighthouse could be built here. Landing at the rock was nearly impossible, but Wheeler managed to do so. He then declared the rock was suitable for a lighthouse. John. R Trewavas a master mason, was hired to survey the rock. He had previous experience with constructing a similar lighthouse on Wold Rock off Land’s End, England. On September 18, 1879, Trewavas sailed out, with the sailor Cherry, to survey the rock, but he slipped trying to step foot onto the rock. Trewavas was swept away by the harsh sea; his body was never recovered.

Charles A. Ballantyne took Trewavas’s place. Ballantyne was forced to hire four mean who did not know the area. He kept these men away from the negative opinions from the public, until the weather was clear enough for them to attempt landing. Ballantyne and his men were able to land on Tillamook Rock, on October 21, 1879. Five more men from the crew, arrived a few days later. Supplies was transported to the rock through a system of pulleys. In the first ten days, all then men were fully exposed on the rock. There was no shelter on the rock. On January 2, 1880, a Nor’easter struck the rock. This caused the seas to crash over the rock washing away a storehouse and tools.

On May 31, 1880 the rock had finally been leveled out, and construction of the lighthouse could begin. The lighthouse was supplied through Chalmers, Holmes, and Jeffery, who provided fine-graine baslt rock. The lantern room was supplied by Calvin Nutting and Son of San Francisco. Fog sirens were also installed in the station by A & F Brown. H. S. Wheeler directed the construction of the lighthouse. The lighthouse includes a one-story keepers dwelling, and sixteen foot squared tower that rises from the center of the keepers dwelling. This tower supports the lantern room. It took 575 days to construct the lighthouse, and the total cost came to $123,492.82.

Generally, the Tillamook Rock Lighthouse had a head keeper and four assistants. The keepers spent three months on the rock, and 2 weeks off the rock. If the men had families, their families stayed ashore. There were always four men on the rock at a time. Because of the cramped living space, and brutal storms, the rotation length was changed to forty-two days on, and twenty-one days off. There is only one known keeper death, Thomas Jones. Jones was one of the assistants; he fell from thirty-five feet onto rocks and passed away from his injuries. The light in the lighthouse was turned off on September 1, 1957. There were many owners of the lighthouse after this, but no one made any renovations or changes to it.