Historic Sandfield Cemetery is the late nineteenth and early twentieth century burial site of several African-American leaders and businessmen which include the following: Robert Gleed, Mississippi State Senator (1870-1875); Richard Denthrift Littlejohn, publisher and businessman; William Isaac Mitchell, Educator, first black principal of Union Academy School, and president of the “Penny-Savings Bank”; Jack Rabb, Businessman, who also bought his own freedom; Simon Mitchell, Justice of the Peace during the Reconstruction Era. The Mississippi Department of Archives and History approved a state historical marker dedicated at the site in 2019. Since 2006, students from the Mississippi School for Mathematics and Science, have created and performed "The Eighth of May Emancipation Celebration" on the grounds of the cemetery. On west side of Martin Luther King Drive South and College Street.

Voices in Harmony chorus from Mississippi School for Mathematics and Science, performing "Lift Every Voice and Sing" in historic Sandfield cemetery. 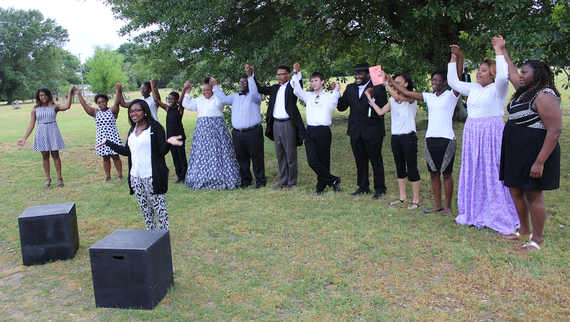 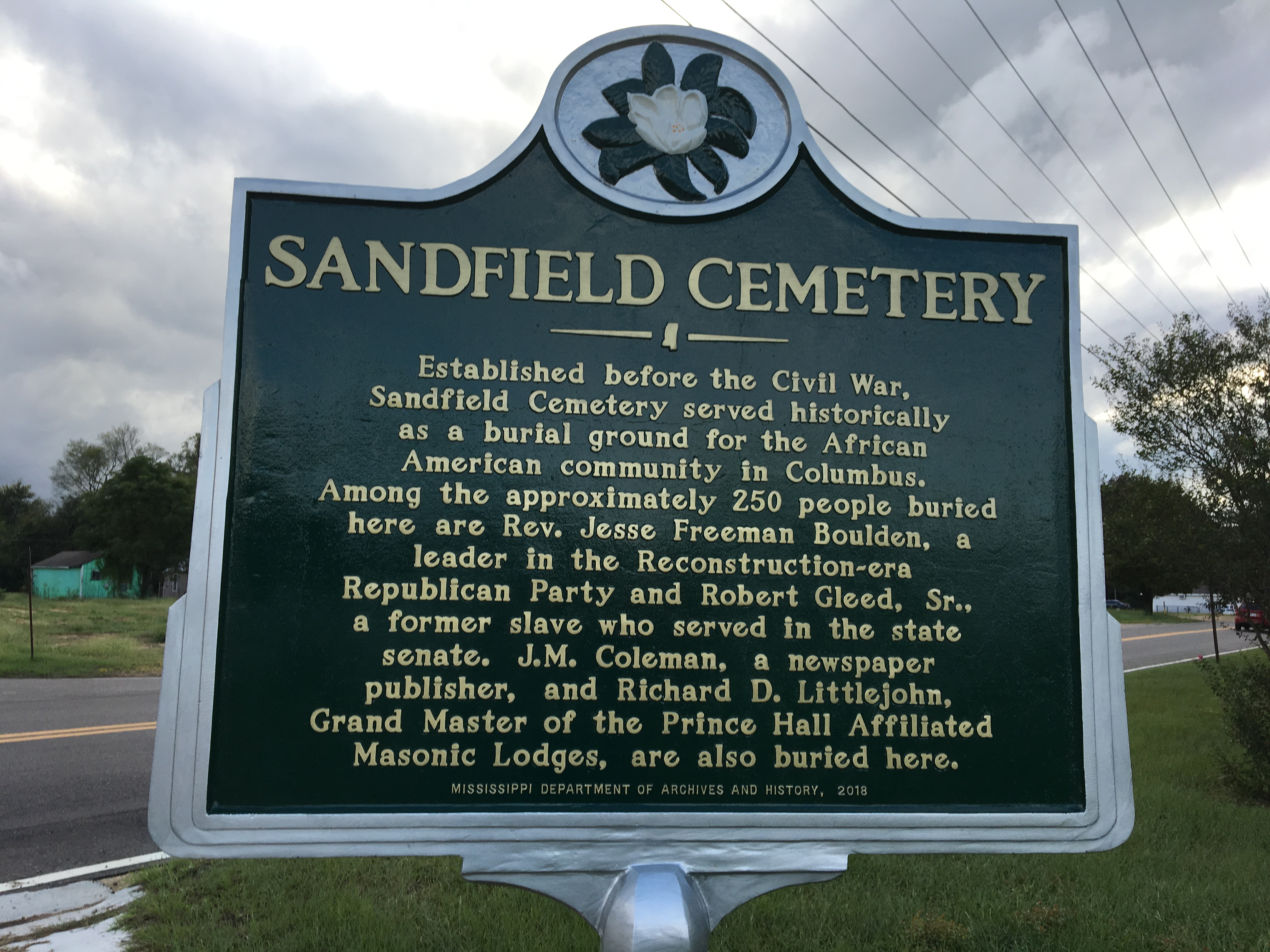 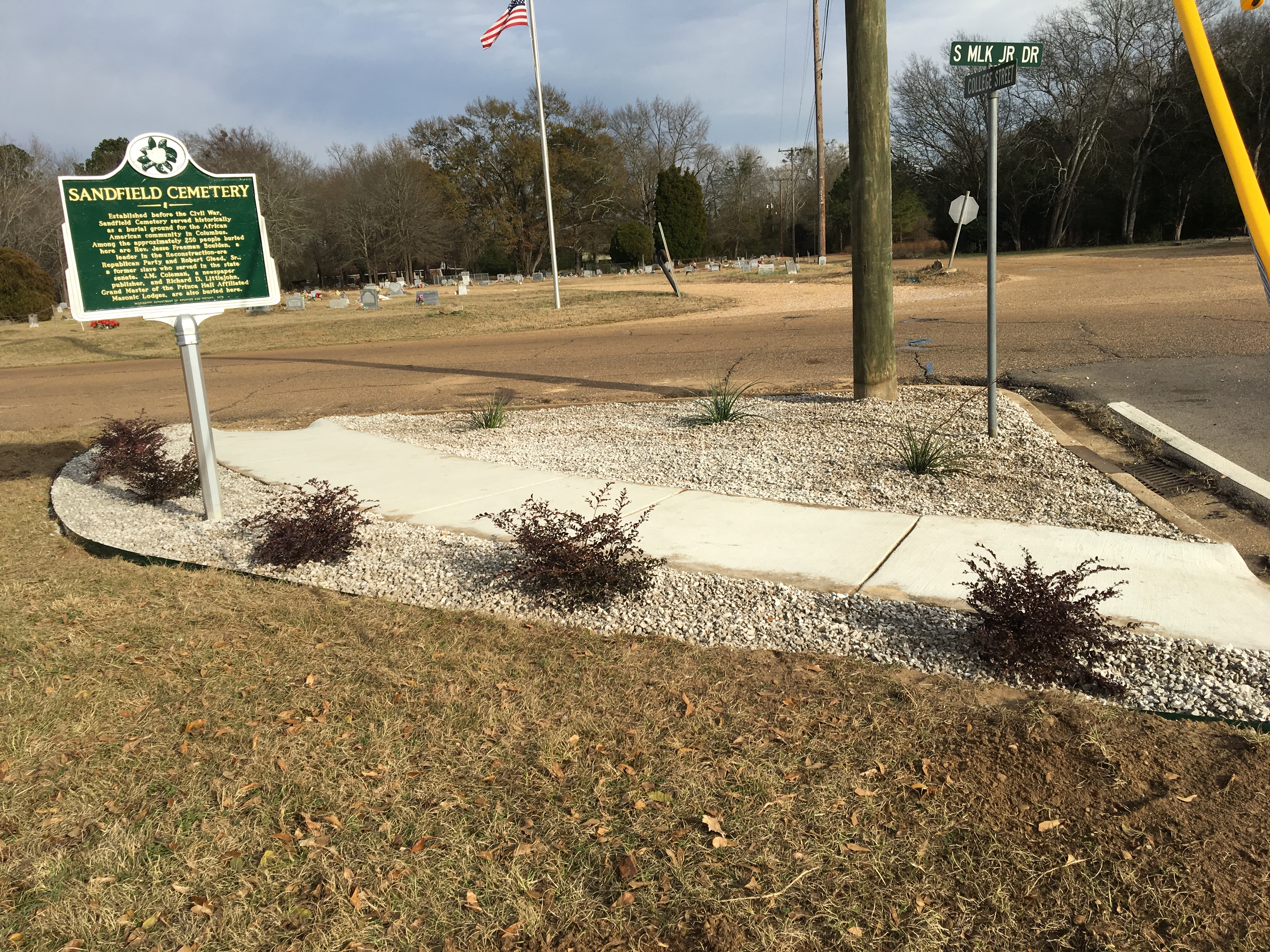 on 17 July 1854 as a burial ground for African Americans, who made up the majority of the local population. An ordinance of

28 July 1854 required African Americans, slave or free, to be buried only in this

cemetery. After the war, Freedmen of Columbus continued honoring their dead

have gravestones or markers of any kind. Those who do have headstones are

representative of a strong African American presence in Columbus’ history from

1865 to the 1950s, including veterans of both WW1 and WW2. Previously, 8 African American Union troops (U.S.C.T.) were buried in the cemetery. Their remains were relocated the Corinth National Cemetery in 1867.

There are no longer burials on the west side of Martin Luther King Drive. East of the road, the cemetery is still active.

Local residents believed him to be a runaway slave, but he would not give

Mississippi runaway slave statute. After the war, Gleed was appointed to

successfully ran for a term representing Lowndes County in the Mississippi

state senate (1870-1875). Gleed operated many businesses in Columbus on

(now Second Avenue) North. The corner was known as “Gleed’s

Corner” during the late 19th Century.  Gleed also served on the Board of Trustees of Alcorn University while Hiram Revels was University President.

On the eve of the November 2, 1875, election in which Gleed was running for Sheriff of Lowndes County, a force led by former Confederate General Jacob Hunter Sharpe attached Gleed and other Republicans in the City of Columbus. According to Sharpe's written report published in the local newspaper as well as Congressional testimony, 4 African Americans were killed and 3 others wounded in an effort to violently suppress the vote of the majority of the county the next day.

At some point in the late 19th century, Gleed moved his

family to Galveston, Texas. After his death there, his body was transported to Columbus

for burial. He is buried with his wife Susan, his daughter Anna, and three sons, Robert Gleed Jr., Virgil Gleed, and John Robert Gleed.

Jesse Freeman Boulden -- Rev. J.F. Boulden was founding pastor of Missionary Union Baptist Church in Columbus, and served in the Mississippi House of Representatives (1870-71). According to Carter Woodson, after first settling in Natchez in 1865, Boulden "...presented to Congress the first petition of that State praying that Negroes be granted the right of franchise." Later, "...he was made a factor in the organization of the Republican Party in the northeastern part of the State. He made the first Republican speech in the court house at Columbus and was a member of the first Mississippi Republican State Convention in 1867."

“In all of this, however, he was not seeking personal gain; for brought out against his will as a candidate for the lower house of the legislature, he once thought of declining, but finally yielded, thinking that he might be able to do some good. In this position he took the lead in piloting through the legislature the election of Hiram Revels as United States Senator, and, after helping B.K.Bruce to become Sergeant-at-Arms of the Senate, used his influence to make him also a member of the upper national body. He, like many others of his time, however, never deserted the ministry altogether for politics. After serving various churches and editing The Baptist Reflector of Columbus, Mississippi, he rendered his most valuable service as a general agent of the American Baptist Home Mission Society…”

Jack Rabb – Jack Rabb was the slave of Dr. Alexander J. Rabb of Columbus who bought his

a free man of color. He began a barbershop business and ran a successful

nursery business known as Temperance Garden or Rabb’s Garden, on the spot

where the Barrow school building is now. He also owned and operated a

grocery store and liquor store. His wife is buried next to him.

and only African American owned and operated bank in Columbus. He was the

pastor of a local church and was the publisher of the Columbus Morning Star,

Richard D. Littlejohn – A graduate of Oberlin College, Richard Denthrift Littlejohn immigrated to Columbus in the 1880s. He was active in local politics and his name appears many times from 1885 until 1903 in the minutes of the Columbus city council. Littlejohn was a founding member of the local African American masonic lodge and attained the rank of Grand Mason. He was the publisher of The New Light, an African American newspaper, from 1887 until his death in 1903.

Simon Mitchell – Formerly enslaved, Simon Mitchell was a deacon in Missionary Union Baptist Church who served as justice of the peace in Columbus during Reconstruction.

William Isaac Mitchell – A son of Simon Mitchell, W. I. Mitchell was born into slavery in 1855 in Columbus. He attended Alcorn Agricultural and Mechanical College (1872-1874) and received a bachelor of science from Central Mississippi College. He began teaching at and later became the first African American principal of Union Academy, the first public school for African Americans in Mississippi. He was co-founder and president of the Penny Savings Bank, the first and only African American owned and operated bank in Columbus, which operated 1906-1913. He was a member of the Masons, the Knights of Pythias, and the Colored Independent Order of the Oddfellows. He was a Sunday school teacher at Missionary Union Baptist Church and a member of the board of trustees of the Ministerial Institute and College in West Point, Mississippi. He died in 1916. In 1924, the Columbus school board named Mitchell Elementary School in his honor.

1872-1873 Catalogue of Officers and Students; Alcorn University at Oakland Mississippi

1873-1874 Catalogue of Officers and Students; Alcorn University at Oakland Mississippi

The History of the Negro Church, Carter G. Woodson