This bridge is one of many of its kind, built by the famous and respected bridge architect, Horace King (1807–1885). King was an architect, engineer, and bridge builder and is considered the most respected bridge builder of the 19th century Deep South. He constructed dozens of bridges in Alabama, Georgia, and Mississippi. This bridge, named after his passing, stands as a monument to his legacy as a master architect of the 1800’s. 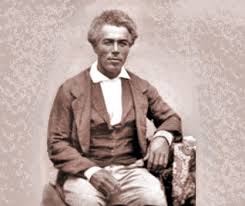 Born as a slave of African, European, and Native American ancestry in South Carolina, Horace King was one of the most respected bridge builders in west Georgia, Alabama, and northeast Mississippi from the 1830’s until the 1880’s.

King moved with his master, John Godwin (1798-1859), a contractor, to Girard, Alabama, a suburb of Columbus, where Godwin had the contract to build the first public bridge connecting those two states. King probably planned the construction and directed the slaves who erected that span. During the early 1840s King served as superintendent and architect of major bridges at Wetumpka, Alabama, and Columbus, Mississippi, without Godwin's supervision.

Purchasing his freedom in 1846, King went on to construct lattice truss bridges at every major crossing of the Chattahoochee River and nearly every other major river in the Deep South between the Oconee and Tombigbee. He later would serve as a Republican member of the Alabama House of Representatives from 1868 to 1872.

This bridge was one of King’s greatest legacies and stands today as a reminder of his contributions to the U.S.’s architectural legacy.