Established in 1964, the Tennessee Valley Museum of Art offers rotating exhibitions and selections from their permanent collection. The museum also hosts classes, lectures, and juried art competitions, as well as the annual Helen Keller Festival of the Arts which displays work from artists throughout northern Alabama and beyond. The museum also hosts an annual celebration that decorates a variety of Christmas trees to reflect a number of themes.

The Tennessee Valley Art Center was constructed in 1972 on Tuscumbia’s historic Commons. 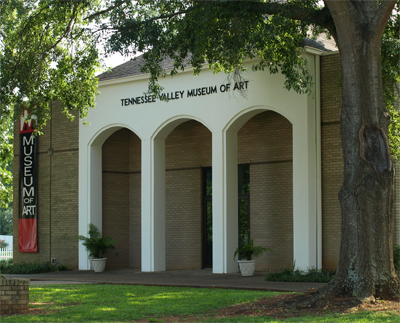 Local residents incorporated the Tennessee Valley Art Association in 1964 and began the work of constructing a museum and to provide exhibits and programming for northwest Alabama. The Tennessee Valley Art Center was constructed in 1972 on Tuscumbia’s historic Commons, property provided  by the city. The Association added a performance series in 1978 that included Sunday concerts in local churches and other public venues.  The Tennessee Valley String School and Suzuki School of Music were created to provide music classes for adults and children. Arts programming grew significantly over the next few years and included Center Stage Community Theatre (1980) and The Shoals Community Orchestra (1982).

For five years, music and theatre programs rehearsed and performed at the Art Center in a single gallery amid changing exhibitions. In 1985, the music components incorporated independently as The Shoals Symphony and moved to a new home. Center Stage remained a part of TVAA and relocated to the Ritz Theater. In 1998, an Art Center expansion doubled exhibition space at the Art Center providing a workshop, art storage, and a permanent display for the prehistoric Martin Petroglyph. A plaza honoring TVAA founder, Ethel Davis, was constructed in 2008 and The Center was re-named The Tennessee Valley Museum of Art in 2009.