Blue Spring State Park, located in Volusia County, is a well known and recognized spring being known to serve the West Indian Manatee as a refuge and conservation site. It's located along the St. Johns River, with a history of previously being a port for steamboat activity in the 1800s. Today, it's a state park that still serves as a sanctuary for the manatees from November 15th to March 15th pending manatee activity, but is open to the public for recreational and educational purposes. These activities range from bird watching, hiking along the Pine Island Trail, connecting to the Spring to Spring Trail, and also camping in the park. 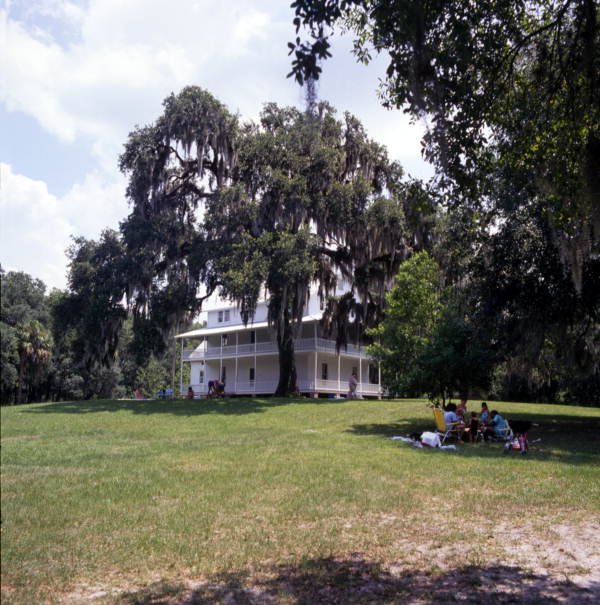 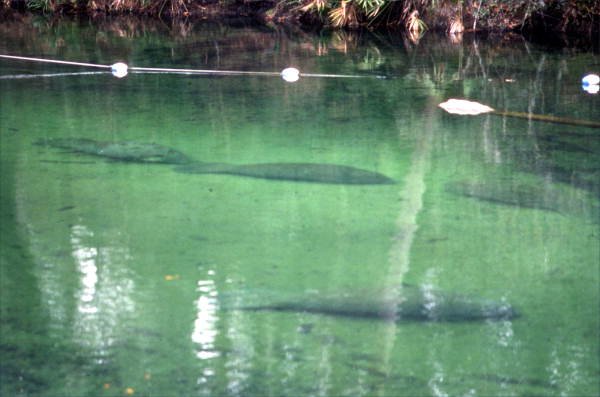 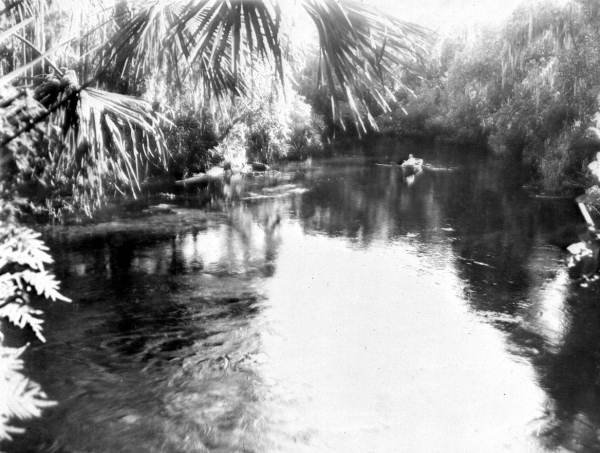 Manatees in the spring run 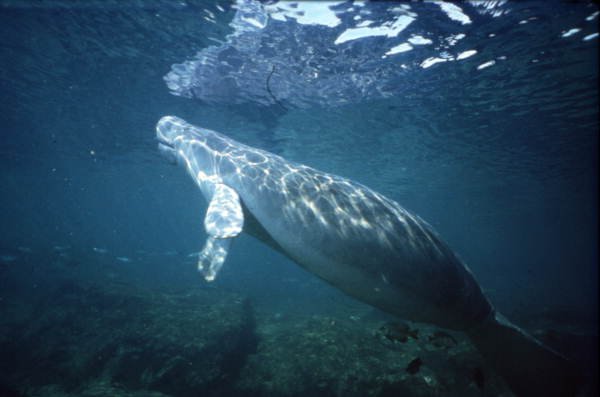 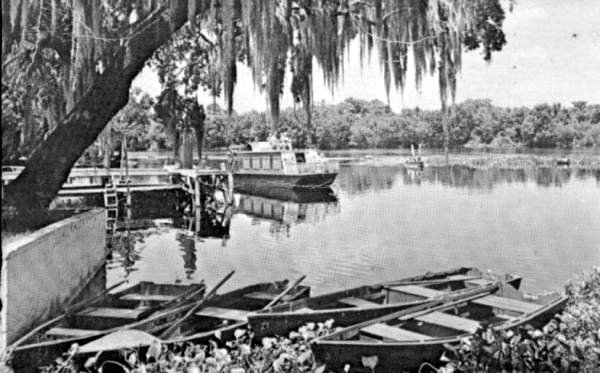 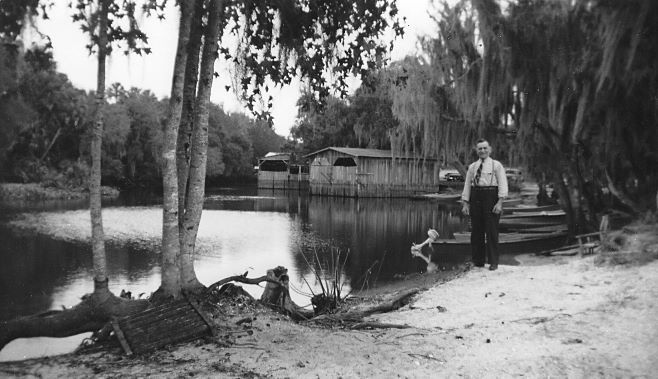 Ladies relaxing under large Oak Tree in front of house

Blue Spring, located in Central Florida, is one of the largest springs in the St. Johns River. This location has become home to the threatened species of West Indian Manatees where, during the winter, mid-November to late March, they pass through. This spring was first founded by a Gold Rush prospector, Louis Thursby, who later became an orange grower and purchased the spring, in 1856. During this time, Blue Spring was filled with traffic, allowing for a lot of steamboat activity where tourists and goods would be shipped from Volusia county all the way to Jacksonville and even further.

The spring later, was brought into light when a television series, Underwater World of Jacques Cousteau, featured Blue Spring and the Manatees in an episode called ‘The Forgotten Mermaids’ in 1971. From the episode, the documentary brought attention to the endangered manatee species, and helped the state recognize the importance of Volusia Blue Spring as a home to the manatees during the winter, resulting in the state to purchase the location.

The purchase of Blue Spring by Florida was a very magnificent purchase, not because it creates income for the state of Florida, but because Florida wants to help preserve something important in nature. Springs in general, are an important environmental gem because they can range from just being a natural filtration system for the surrounding ecosystem, to becoming a natural attraction for the surrounding economy.

Overall, springs are essential for the land, it creates clean water for surrounding plants and trees, allowing for local species such as birds, fish, ducks and most importantly, manatees, to thrive. These aquifer diffusers also contribute in maintaining habitats that are home to many organisms who depend on a wet environment, especially since Florida consists of many wetlands in various locations. There are plenty of springs in the state of Florida, majority of them are either too small, privately owned, or have been protected and closed off by the state. There are some springs that have been opened to the public though; for example, “Blue Spring, one of more than 300 springs in Florida, has been open to the public as a State park since 1972” (German E.R.).

To properly grasp the importance of Blue Spring though, its history on the St. Johns River must be defined. Initially, the St. Johns River was used as a means of commute and transportation of goods throughout its history. It also assisted in the facilitation of economic growth and trade, along with being a source of water and food. When Florida finally became a part of the United States, it was still in its upbringing, attracting many prospectors who went to Florida in hopes to claim land and earn money.

In the process, Florida became a very popular tourist destination due to its warm climate and exotic environment. With raw materials needing to be transported, and tourists coming into Florida, many industries and companies were able to flourish. One of these industries was the citrus industry, it became one of the largest industries in Florida during the nineteenth century. Many prospectors, including Louis Thursby, wanted their portion of benefits that orange groves had to offer. This resulted in many land owners to erecting homesteads along the St. Johns River, including Thursby, who by then owned Blue Spring.

Even though the Citrus Boom was economically great for Florida, there was another source of income, and it was fueled by tourism. The use of the steamboat was continuously in demand at the time, meaning that many steamboat companies were regularly competing. In result, “Seven steamboat lines operated out of Palatka, rivaling Jacksonville as one of the major port cities along the St. Johns River” (Wingard Creative). Due to the constant traffic on the St. Johns River, Blue Spring soon became a port for the boats going both upstream and downstream, carrying either goods, tourists or both.

Even though Blue Spring played a key role throughout the history of the St. Johns River, it still has other important attributes that help its environment today. It’s a crucial aspect of Volusia’s Blue Spring to filter water for the habitat, but another major aspect to the spring is that it serves as a stop for the West Indian Manatees who migrate through the St. Johns River. Over the past few decades, the state park as well as the Florida government, have been doing everything they can to help protect and preserve this species of manatee. Laws such as the “Endangered Species Act of 1972, the Marine Mammal Protection Act of 1973, and the Florida Manatee Sanctuary Act” (German E.R.), help enforce the protection of the West Indian Manatees. These protective and preservative actions are only being taken because their population has been dangerously low in the past few decades and have been categorized by the Federal Government as an endangered species; resulting in the close watch of their numbers.

It's really rewarding for the West Indian Manatees that Florida recognized Volusia’s Blue Spring as a refuge and a conservation site for this species of manatee. Even though the spring is federally protected, the manatees still face natural and man-made obstacles. To this day, the spring serves as a place for manatees to live during the winter, and serves as a route for them to migrate through the St. Johns river, as well as the country, throughout the year.

Over the years, the population of manatees have been slowly getting better, but the manatees are still at risk. Even though Florida has been creating state laws to protect manatees, Florida still faces big problems in attempting to conserve what’s left of the manatee population. Of all the environmental issues manatees face, “Hurricanes, cold stress, red tide poisoning and a variety of other maladies…”, manatees still face a problem that Florida has been trying to deal with, and it’s that “…their greatest danger is from watercraft strikes, which account for about a quarter of Florida manatee deaths” (University of Florida Survey).

Even though Volusia’s Blue Spring is a conservation site for manatees, the spring also serves as a state park and a historical site. It contains the home of Louis Thursby, who was previously mentioned to be a Gold Rush prospector, who later became a citrus grower, mainly oranges. Then after the recognition of West Indian Manatees being an endangered species, Florida purchased the spring to help preserve the area, and help grow the population of the manatees. This in result allowed for the state of Florida to open the spring to the public, and receive funding from the community to help protect and conserve the environment, and also protect the manatees.

In addition, Blue Spring is a beautiful spot for many tourists and locals to enjoy swimming, canoeing or kayaking, snorkeling and scuba diving. To truly appreciate the site, there other activities out of the water which include camping, hiking, picnicking and lodge cabins, along with the activity of fishing. These activities, in general, sum up and help define what Blue Spring really is, a beautiful natural treasure that has a bigger purpose than what it depicts. Overall, Volusia’s Blue Spring is a naturally beautiful location that will help anyone get in touch with nature and their environment.

Hours from 8 A.M. to Sundown (Time may vary)