Sitting on 132 acres of land, the Gamsjager-Wysong farm house was built in St. Clara, West Virginia in 1906. The land, originally owned by Joseph H. Diss Debar, the settler of St. Clara and also the creator of the West Virginia state seal, the Gamsjager family bought it in 1867 where they built a small log cabin. This area was a hub for German immigrants in the 1840s and aspects of the German culture can still be seen today.

Built in 1906 and still intact today, the Gamsjager-Wysong Farm House is a representation of the German immigration to the St. Clara area starting in the 1830s. 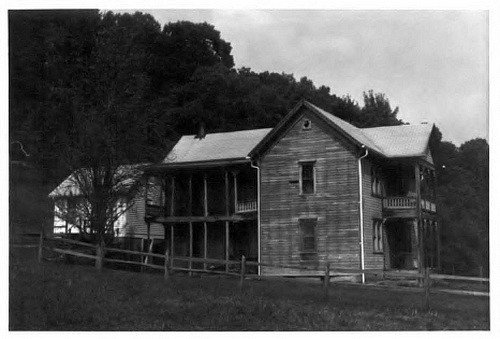 Joseph H. Diss Debar, who was originally from Strasbourg in French Alsace, was hired in 1831 by a man named John Peter Dumas of Paris who owned much of Doddridge County, Virginia at the time. His job was to offer families who were settling in the area around 40 acres of land at no cost. Regrettably, the map of the area that Debar had was inaccurate and did not show the terrain that the new land owners would have to encounter. Regardless, families still lived there because they had no funds in order to relocate. As a result of this confusion, Debar attempted a different approach and started offering more land, 150 acres at a time, for $1.50 per acre. He eventually sold over 19,000 acres to around 100 purchasers allowing his community of St. Clara, which he named after his first wife, to expand to 55 families.

Later in St.Clara, Debar decided to settle in his own town. He built his house by hand, but since been demolished. In 1858, Debar built the first post office in St.Clara and was known as the first post-master. Sketches of Debar made of his own home are currently located in the State Archives in Charleston, West Virginia. Later in life, Debar designed what is now the state seal of West Virginia.

The namesake of the farm now, the Gamsjager family immigrated to St. Clara in the 1860s from Austria. Mathias Gamsjager when he immigrated only had a cross-cut saw to his name. A few years after settling in the area, the family bought a 132-acre piece of land from Debar. There Mathias Gamsjager built a small log house, where later in the beginning of the 1900s, his son John would build the still present farm house. In addition to running the Gamsjager Family farm, Mathias’s son John also ran the local general store and owned a grist mill in St. Clara. Since then, the land is now owned by the great-granddaughter of Mathias Gamsjager, which is how Wysong was added to the official name.

The appearance of this farm house has changed only slightly since it was built by John Gamsjager in 1906. To this day, it still reflects the German culture that the community of St. Clara was founded on such as the authentic German style siding. Speaking from a historical stand point, it is believed that the Gamsjager farm is the most if not only still remaining example of what the community of St. Clara was like when it was first settled in. The Gamsjager-Wysong house then and now represents the legacy of German influence on this area of West Virginia and throughout the state.