Comprised of a large, red-brick train and bus station and the associated train sheds, the earliest sections of the Harrisburg Transportation Center (HTC) were built in 1887. It has since undergone numerous expansions and renovations, especially after a devastating fire that totally destroyed its roof and gutted its interior in 1904. Originally built by the Pennsylvania Railroad, the HTC is now owned by Amtrak and operated by the Harrisburg Redevelopment Authority. It is a shared facility that, in addition to train service, offers people access to Greyhound and Fullington bus lines as well as nearby local bus service. It was added to the National Register of Historic Places in 1975 and designated a National Historic Landmark in 1976.

The main section of the Harrisburg Transportation Center was completed in 1887. 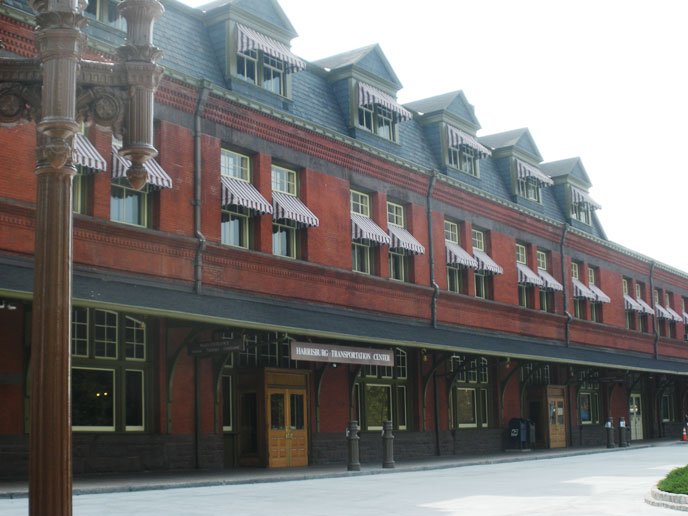 The refurbished main lobby of the HTC. 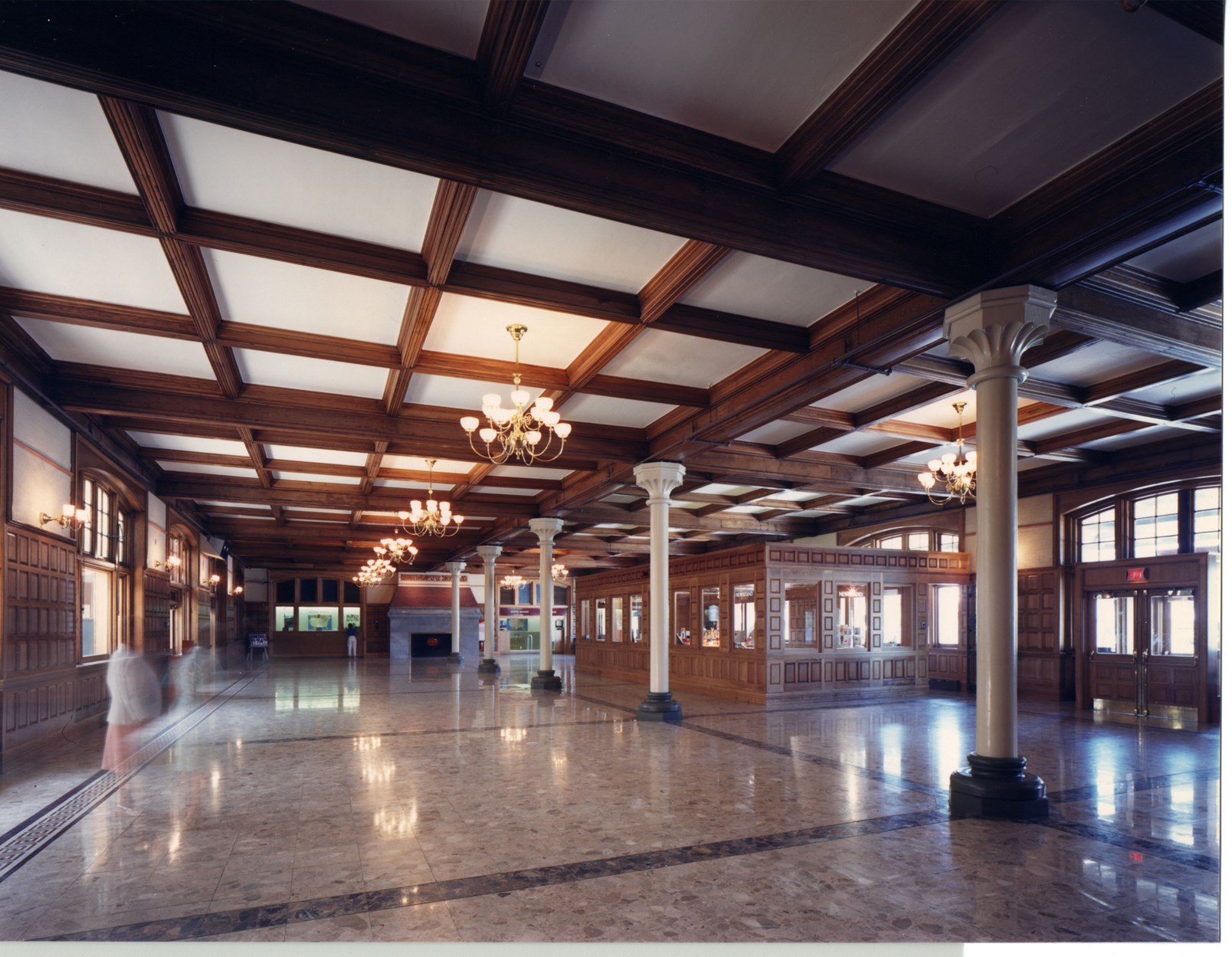 The view from inside the train sheds with the overhead passenger walkway in the background. 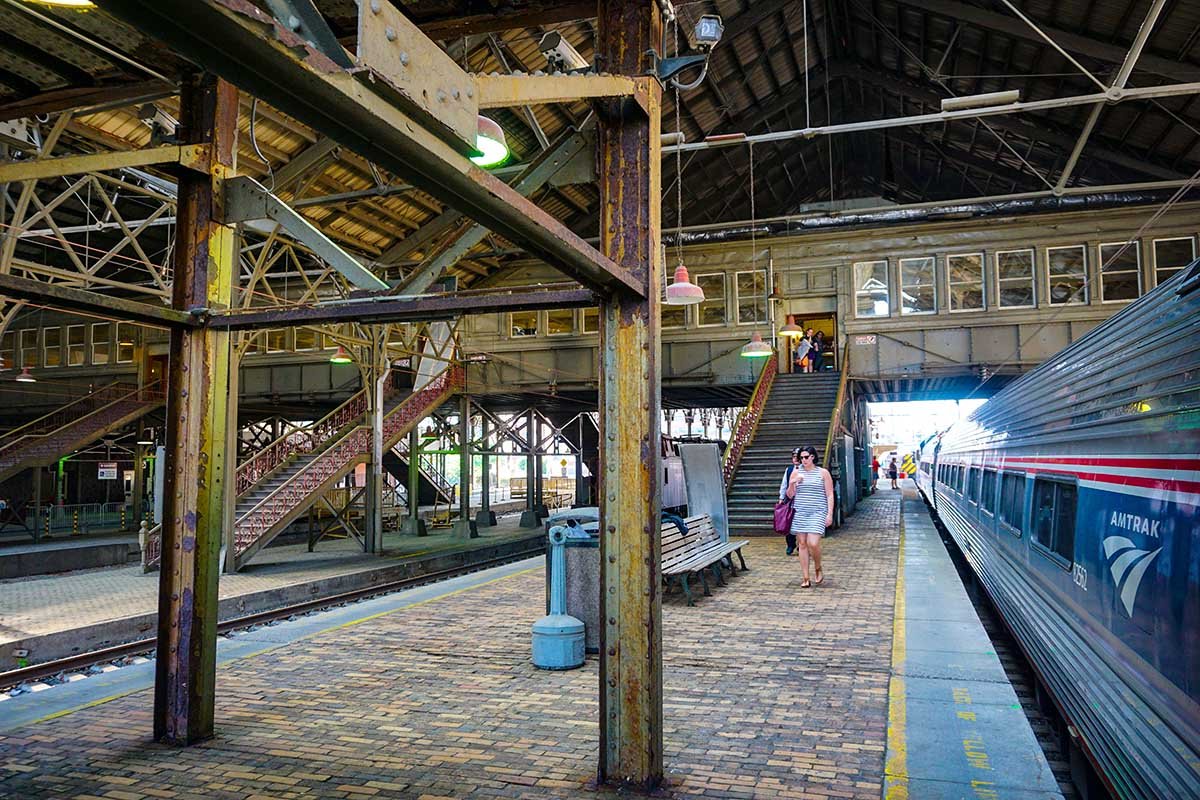 An aerial shot of the HTC with the massive, red-roofed train sheds located behind the station. 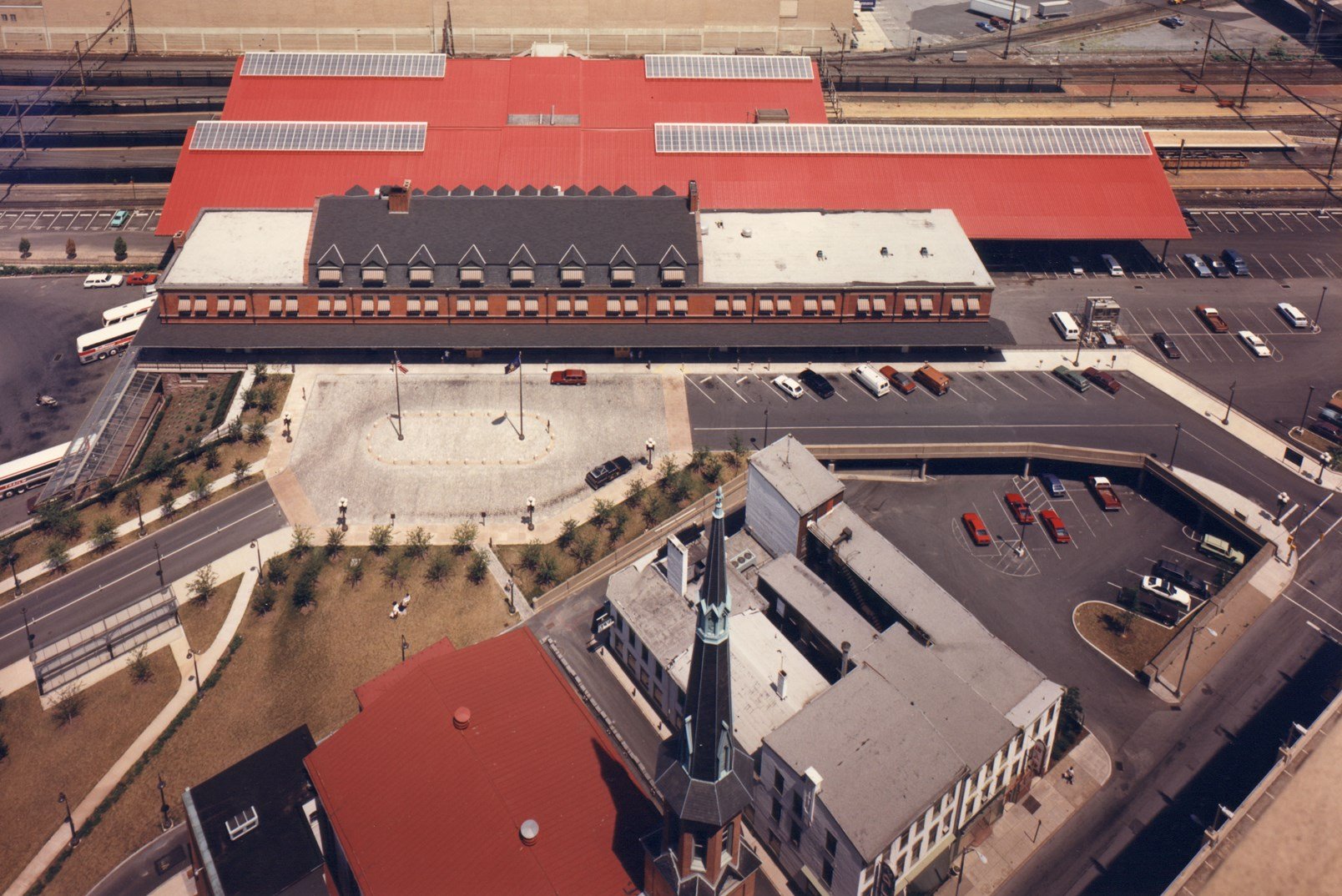 A Civil War Era photograph of the 1857 Harrisburg Train Station. 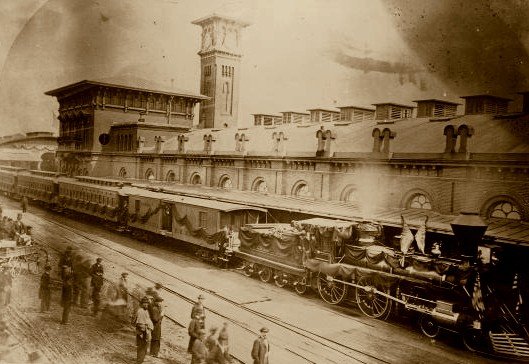 The current HTC is the third one to occupy the same ground.  The first was built in 1849 as the Pennsylvania Railroad was in the midst of building a rail line that would bypass the Mainline Canal that briefly connected Harrisburg to Pittsburgh.  That station was quickly deemed inadequate to meet the needs of the rapidly expanding railroad industry and was replaced in 1857.  By this time, Harrisburg had become a rail hub, connecting the major eastern cities of Philadelphia, Baltimore and Pittsburgh.  This network would rapidly expand to include New York City, Washington D.C. and Chicago.  The 1857 station would host President-elect Abraham Lincoln as he made his way to Washington in 1861 and was a memorial stop as his body was returned to Illinois after his assassination in 1865.

As the number of passengers and freight expanded on America’s rail lines, so too did the country’s stations that served them and Harrisburg’s was no exception.  As a result, the city built yet another, larger station in 1887.  The building’s unknown architect designed a 3.5-story, 8 bay wide, red brick building with a steep gable roof that included three large dormers in the Queen Anne style.  Behind the station, a massive steel and wood train shed was built to protect passengers from the elements.  This shed features numerous Fink trusses at 20-foot intervals and still provides elemental protection to this day.

The station was expanded on several occasions from 1901-1904 and pedestrian bridges were added in the train sheds to permit passengers to walk above the tracks and trains below.  After the fire of 1904, the station’s gable roof was replaced with a new gambrel one, the ticket office was replaced and the waiting room was totally rebuilt. Renovations and expansions continued from 1910-1929 and in 1928 the lines between New York, Washington and Harrisburg were electrified, requiring yet more upgrades at the HTC.  The last major expansion was completed in 1937.

As more people and things utilized other means of transport after World War II, primarily the automobile and airplane, the railroad industry fell into decline.  As a result, the Pennsylvania Railroad merged with the New York Central in 1968, creating the New York Central which then went bankrupt in 1970.  By that time, the NTS had already begun to deteriorate due to neglect.  However, after the U.S. government helped create Amtrak in 1971, it, and the city decided the HTS was worth saving and they embarked on a $13.4 million renovation of the old station and shed from 1974 through the early 1980s.  Today, the HTC serves close to one million passengers per year and there are plans to upgrade once again in 2018.