The Provo Utah Temple is the fifteenth temple constructed by the Church of Jesus Christ of Latter-day Saints (LDS Church). It was built in 1969 by Emil Fetzer and is located on “Temple Hill” overlooking the city. The building features a modern, elliptical design with an edifice of bronze panels and white cast-stone walls. 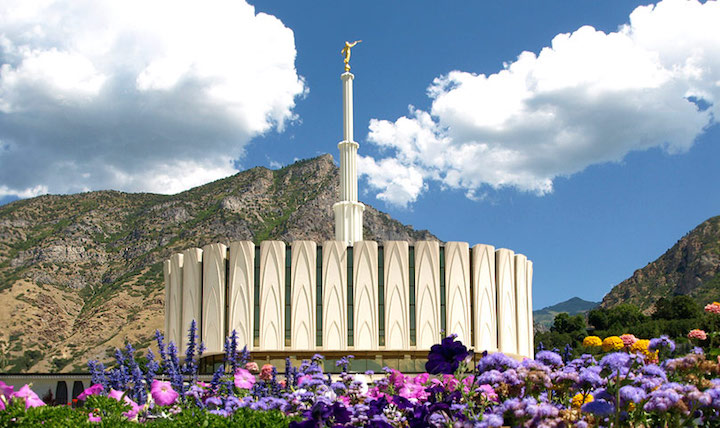 Though the hill overlooking Provo has long been known as “Temple Hill,” for many years there was no temple there; the space was occupied by the Maeser Building of Brigham Young University. In 1967,  the LDS Church announced plans to build a temple new temples to relieve the crowding at the Salt Lake City, Manti, and Logan temples. Provo and Ogden were chosen to be the sites of the new temples.

Emil Fetzer, a Church architect, was chosen to build both the Provo and Ogden temples. Fetzer wanted a design which would be functional and economical. He would go on to design Mormon temples throughout the world.

Fetzer designed an elliptical building of some 128,325 square feet. The celestial room at the building’s center is surrounded by instruction rooms. A number of years after the building’s completion, a statue of the Angel Moroni was added to the spire. While the Ogden temple was redesigned in 2014 and altered its exterior completely, the Provo Utah Temple remains as it was constructed in 1969.

The Provo Utah Temple is one of the LDS Church’s busiest. Its location—a half mile northeast of Brigham Young University and across the street from a Missionary Training Center—the temple is almost always bustling with activity.

In 2016, the Provo Tabernacle was rededicated after a long restoration. Much of the building’s interior was destroyed by a fire that left only the outer walls intact. When the building was rededicated, it was named the Provo City Center Temple, making Provo the second city to house two Mormon temples.