Originally built in 1896, the Dodge City Station is a striking Richardsonian Romanesque building that is undoubtedly one of the finer structures in the city. It was built by the Atchison, Topeka, and Santa Fe Railway (AT&SF). Architect James C. Holland designed it. Today it serves as an Amtrak station for the Southwest Chief train as well as a theater. Cultural, recreational and social events are also held here. For its association with the railroad and architecture, the building was added to the National Register of Historic Places in 2000.

Dodge City Station was originally built in 1896 and is listed on the National Register of Historic Places. 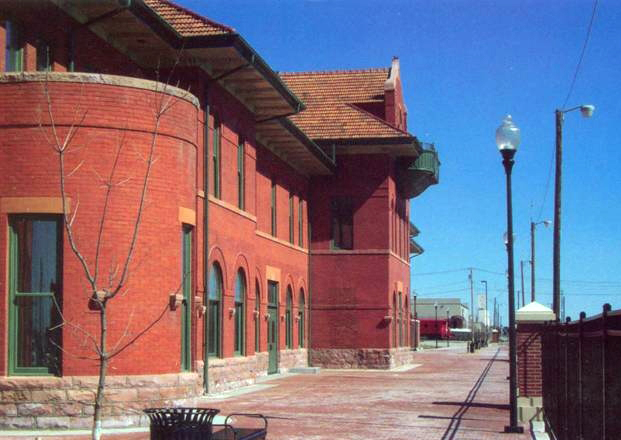 The city was the last stop of the railroad before (and after, if traveling east) large areas of undeveloped lands. Passengers and other would find food to eat, buy supplies, and rest here before continuing their journey. The present structure wasn't the first depot built by the AT&SF. After the town was chartered in 1872, the AT&SF helped lay out the town plat and a year later built a larger loading dock/depot structure. The town grew thanks to the thriving Buffalo trade. Once that declined, people turned to cattle raising and then, eventually, farming. The train station also grew to include a roundhouse, rail yards, shops, a hotel, and restaurant.