Added to the National Register of Historic Places in 1982, the Kunkle Building (also known as the Feller Building) was completed in 1914 and served as the headquarters for the Mechanics Trust Company for approximately twenty years. It was one of Harrisburg’s earliest high-rise buildings, one of only three built prior to 1920 and the first on Market Street. The building itself is architecturally unique in that most of its exterior is faced with white glazed terra-cotta tiles. It currently serves as student housing for the Harrisburg University of Science and Technology while its first floor is leased for retail and commercial space.

The Kunkel Building has been standing at the corner of Market and 3rd Streets since 1914. 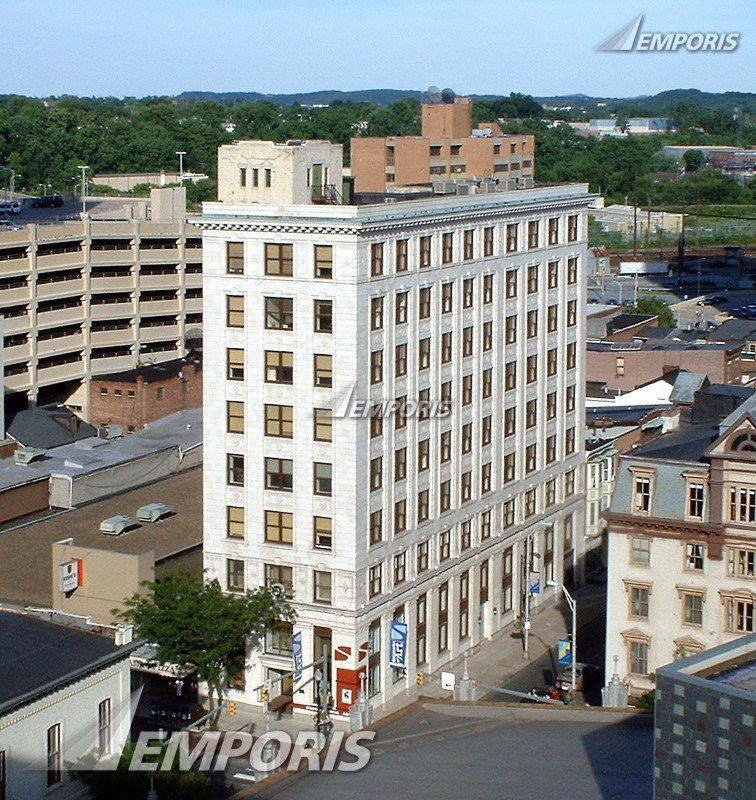 The three-bay Market Street entrance to the Kunkel Building now home to a Subway franchise. 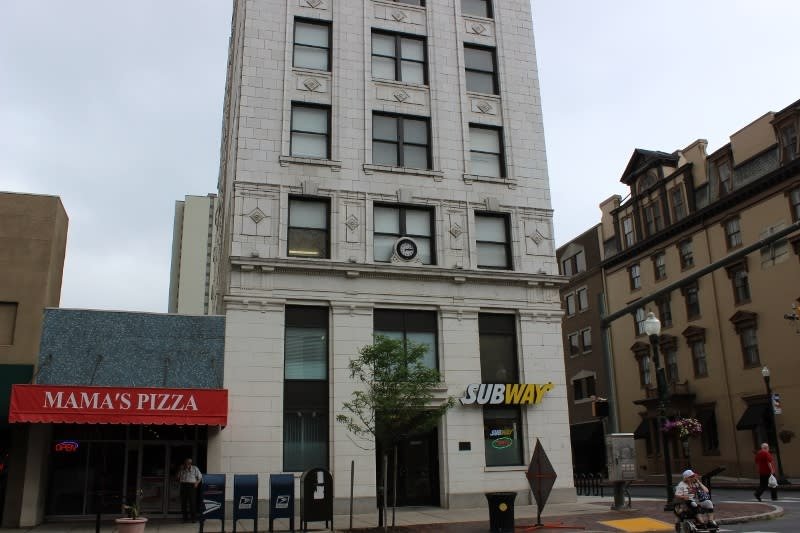 The Kunkel Building is featured on this 1915 postcard. 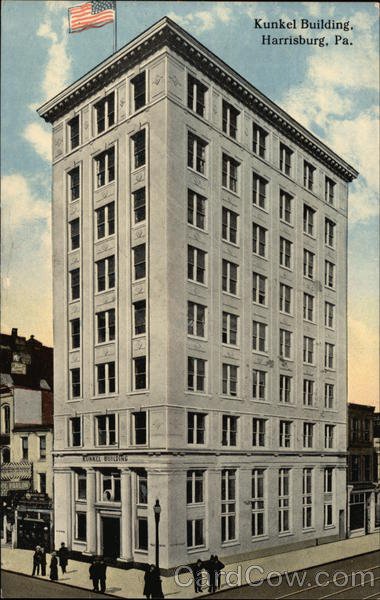 The local historical marker for the Kunkel Building. 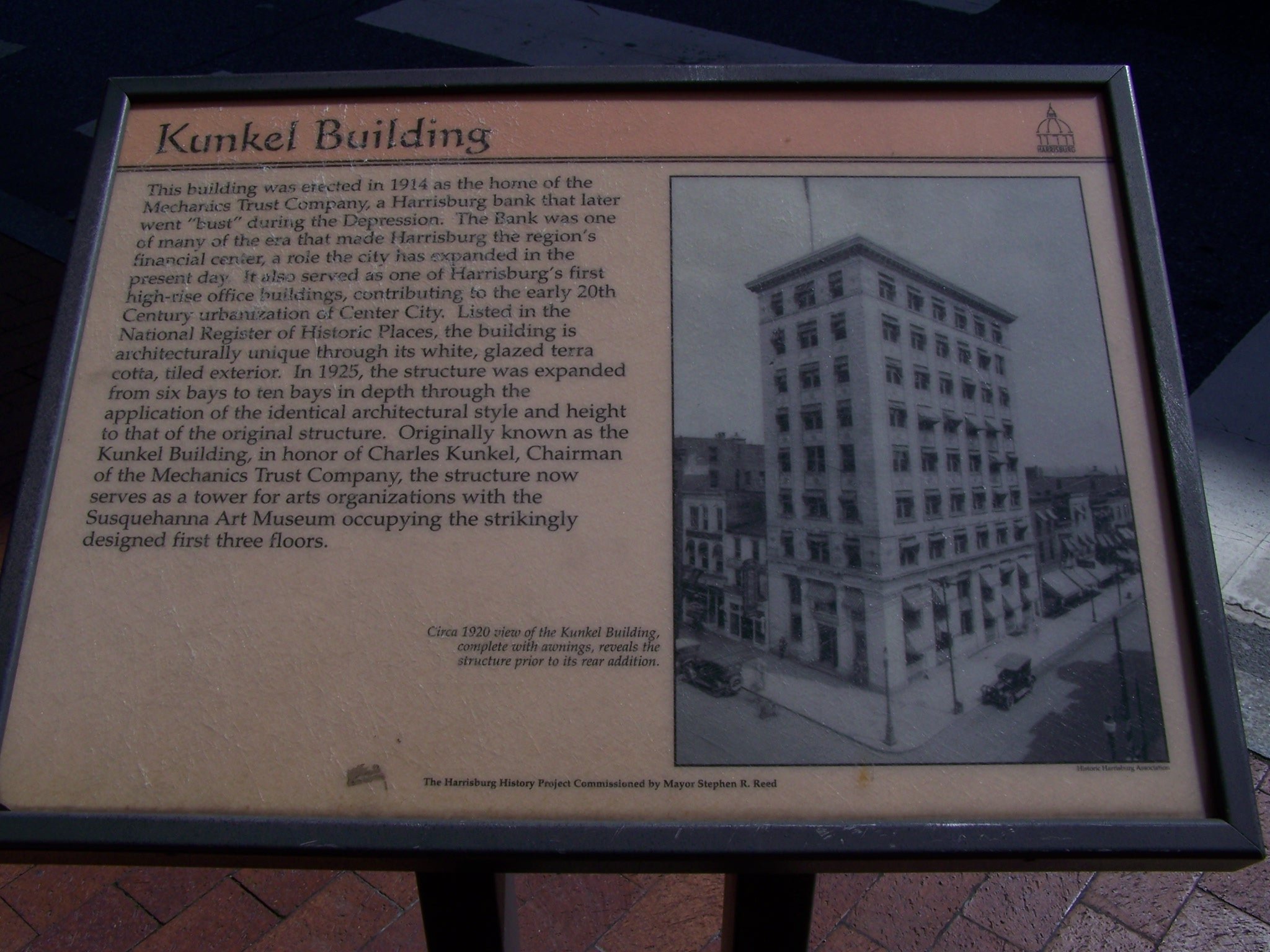 Prior to the construction of the Kunkel Building in 1914, only two high-rise buildings existed in Harrisburg, the six-floor Keystone Building (1870) and the eight-floor USF&G Building (1906).  Named for the chairman of the Mechanics Trust Company, Charles Kunkel, the building initially had eight stories with three bays that fronted Market Street and six along South 3rd Street.  The steel-framed building was designed and built to contain three distinct elements.  The first two floors, built of marble, serve as the base while the terra-cotta faced third through eighth floors represent a shaft and, finally, the bracketed cornice serves as the capital.  In addition to the terra-cotta façade the building also incorporates diamond shaped designs in the spandrel panels between stories and terra-cotta keystones on the window lintels of the third, eighth and ninth floors.

The bank originally occupied the buildings first two floors with offices on the floors above and it expanded the building by adding four bays, identical in architectural style and height, in 1925 and for two decades it helped turn Harrisburg into a regional financial center.  However, the Great Depression proved too much for the bank to overcome and it failed sometime in the mid-1930s.

The building was then occupied by Feller’s Clothing Store some time in the same decade.  It promptly divided the oversized first floor in two, taking the building from eight to nine floors.  Feller’s also altered the first two floors of the Market Street façade by adding plate glass storefront windows with blue tiling above.  Feller’s used the first three floors to hawk its wares and the additional floors were leased for office space until the late 1970s.  Since that time the building has been utilized by a non-profit called the People Place of Greater Harrisburg and the Susquehanna Art Museum which left in 2011 for its new home in another former bank building at the corner of 3rd and Calder Streets.

In 2011 the Kunkel Building went through a $4 million renovation in order to convert it into a 40-50 unit apartment building that could house 80-90 students from Harrisburg University which signed a ten-year lease with Brickbox Development Limited.  Today, the 39,000 square-foot building, renamed Market View Place which sits only one block from the university’s acadmeic center, houses students on floors four through nine, while the second and third floors house the university’s business accelerator program.  Finally, the ground floor is leased for retail and commercial use.