Eastern Washington has been a major producer of wheat since the late 1800s. The Snake River made transporting wheat easy, but getting wheat over the steep terrain to the river was difficult and dangerous. Grain tramways were developed to make the movement of grain down steep inclines easier. The Interior Grain Tramway was built in 1901 and operated through the Great Depression. Although the majority of the towers have collapsed, some of the remains have been preserved making this one of the best-preserved of the tramways that transported millions of bushels of Washington wheat to the river in the late 19th and early 20th century.

Remains of the Interior Tramway overlooking the Snake River. Only eight of the thirty-five towers remain. 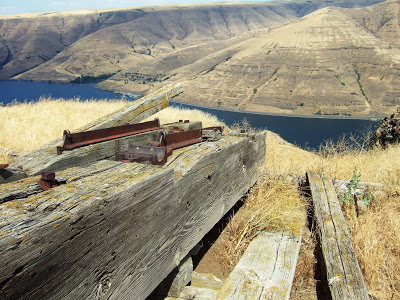 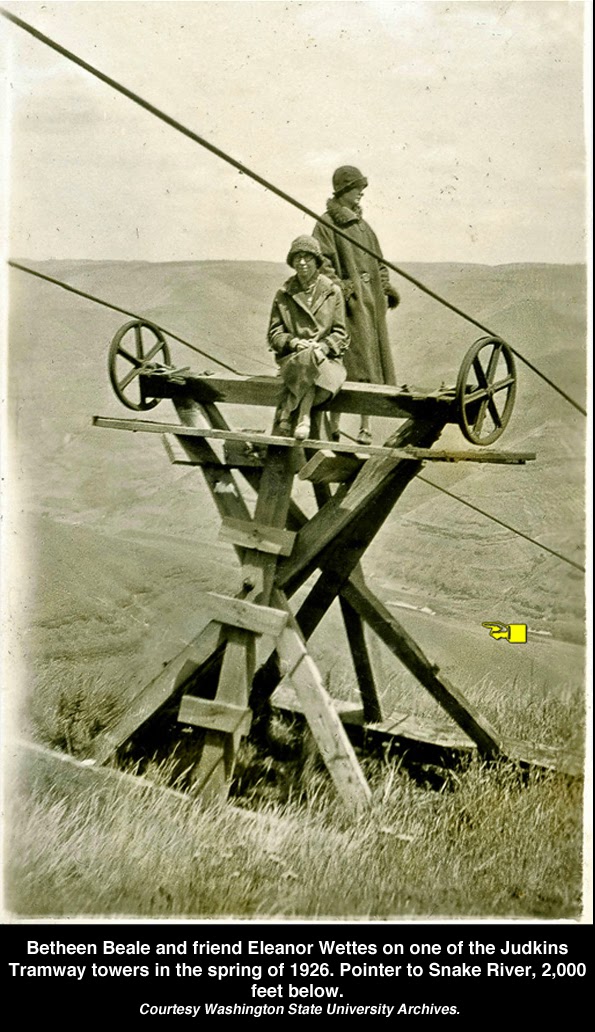 The Palouse has been a wheat-producing region since the late 1800s. The Snake River made transporting wheat--from the Snake to the Columbia River and then to Portland--relatively easy, but it wasn't without its problems. The Snake River winds through the Palouse at the bottom of a steep canyon. The distance from the top of the nearby hills to the river below is 1,600 feet, making descent by horse and wagon treacherous, if not deadly.

Grain slides, which were long wooden tubes which funneled wheat to the river below, were developed to get around that problem. But grain slides had their own problem; enough heat was generated during the process that the wheat frequently arrived at the river blackened and burned.

By the 1880s, local farmers began to experiment with grain chutes, and gradually developed tramways. The tramways involved a continuous circular cable that ran on a pulley. Much like a ski life, the pulleys had steel baskets at regular intervals. The baskets were loaded at the top of the hill in the head house, and gradually lowered to the river below.

The Interior Grain Tramway, which is also known as the Judkins Tramway, operated from 1901 until 1938. The tramway was built by Aaron Kuhn, who sold it to the Interior Warehouse Company in 1902. The tramway carried 128 buckets, each of which carried two sacks of wheat.

The Interior Tramway was in operation until 1938, when the expansion of railroads into the area made that method of transporting wheat obsolete. The warehouse that once sat on the river's edge was torn down and its location is now underwater. Though the Interior Tramway is one of the most intact of the remaining tramways in Washington, it is in advanced state of decline. Foundations of some of the buildings remain. There are remains of at least 27 wooden towers, and eight still stand. Almost the entire length of the cable remains, and much of it is still suspended.

The Interior Grain Tramway is listed on the National Register of Historic Places.