A mob lynched Fred Alexander at this location in Leavenworth on January 15, 1901. After being accused of rape, a large mob of over 5,000 people surrounded the Leavenworth County Jail, each determined to kill Alexander rather than allow him to stand trial. The mob used force to gain entrance and take over the jail, dragging Fred Alexander and taking him to the area where the alleged crime had taken place. The mob then tied Alexander to a rail and covered him with kerosene. According to historian Shawn Alexander, "though his fate was certain, Alexander did not confess. Instead he turned to the crowd and proclaimed, 'People you are killing the wrong man. Some day you'll run up against the right man, the man who killed the girl.” These were the last words of Fred Alexander as he was burned alive on this street corner for a crime he neither admitted nor had been convicted of committing.

Rather than permit him to stand trial, a mob lynched Fred Alexander at this location in Leavenworth on January 15, 1901. Historians have shown that there was very little evidence linking Alexander to the alleged crime. 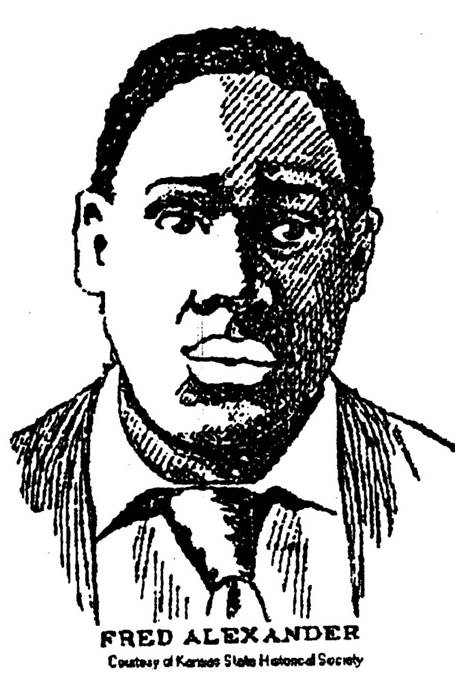 Historians Shawn Alexander, Bent Campney, and Christopher Lovett have studied the events leading up to the lynching. Both use newspaper accounts to show how residents of the city used groupthink to conclude that the frequent attacks against women were being committed by Black men. During the late 1890s, the Leavenworth Times reported the likelihood that the attacks were being made by members of both races. Local papers also admitted that some of the attackers might have appeared to be Black because white men Blackened their faces to conceal their identity and usually committed their crimes against women at night.

By the summer of 1900, the Leavenworth Times engaged in sensational reporting, playing to the existing prejudices of the city. For example, the paper began editorializing about the likelihood that any attack was being made by Black men. For example, the Times added this statement to a report of an attack by an unknown party: “Although it is not known whether it was a white or colored man who committed the deed it is strongly suspected that it was one of the latter class because of the fact that the man who made all of the assaults was a Negro.”

In this atmosphere, the white citizens of Leavenworth developed a mob mentality and assumed that Fred Alexander must have been the perpetrator after a woman indicated that her assailant was Black and had followed her while whistling prior to the attack. Alexander not only had a habit of whistling, but when the police questioned and then apprehended Alexander, "great beads of perspiration appeared on "Alexander's forehead." In the mind of the enraged public, this was evidence of Alexander's guilt. Unwilling to allow Alexander to stand trial, the mob believed that they needed to take direct action against Alexander else other Black men would commit other crimes.

Shawn Alexander's article, linked below, details the ways that African Americans in Leavenworth and the region attempted to prevent the lynching and their efforts to secure a trial for those who had committed the crime. Campney's article is unique in its focus on the life of African American leader William Bolden Townsend and his efforts to seek justice before and after the lynching. Lovett's article provides additional detail about the lynching and places it in the context of similar crimes in Kansas and the nation.