The Rockefeller Memorial was the dedication site of The Great Smokey Mountains National Park which was dedicated on September 2, 1940, by President Franklin Roosevelt. This memorial was in honor of The Laura Spelman Rockefeller Memorial Fund, in recognition of the five million dollars that was given to support the creation of The Great Smoky Mountain National Park. Without this generous contribution, the project to turn over 150,000 acres of farmland and parcels into a National Park, would not have been possible. Local individuals including school children along with political boosting fundraising, was the primary resource for the funding of this project since the government could not purchase land for the use of National Parks. After some convincing of why the protection of this land was important, John D. Rockefeller made a monetary contribution from the Laura Spelman Rockefeller Memorial Fund, which matched the previously raised five million dollars. As a result, the opening of one of the United States most popular National Parks became possible. 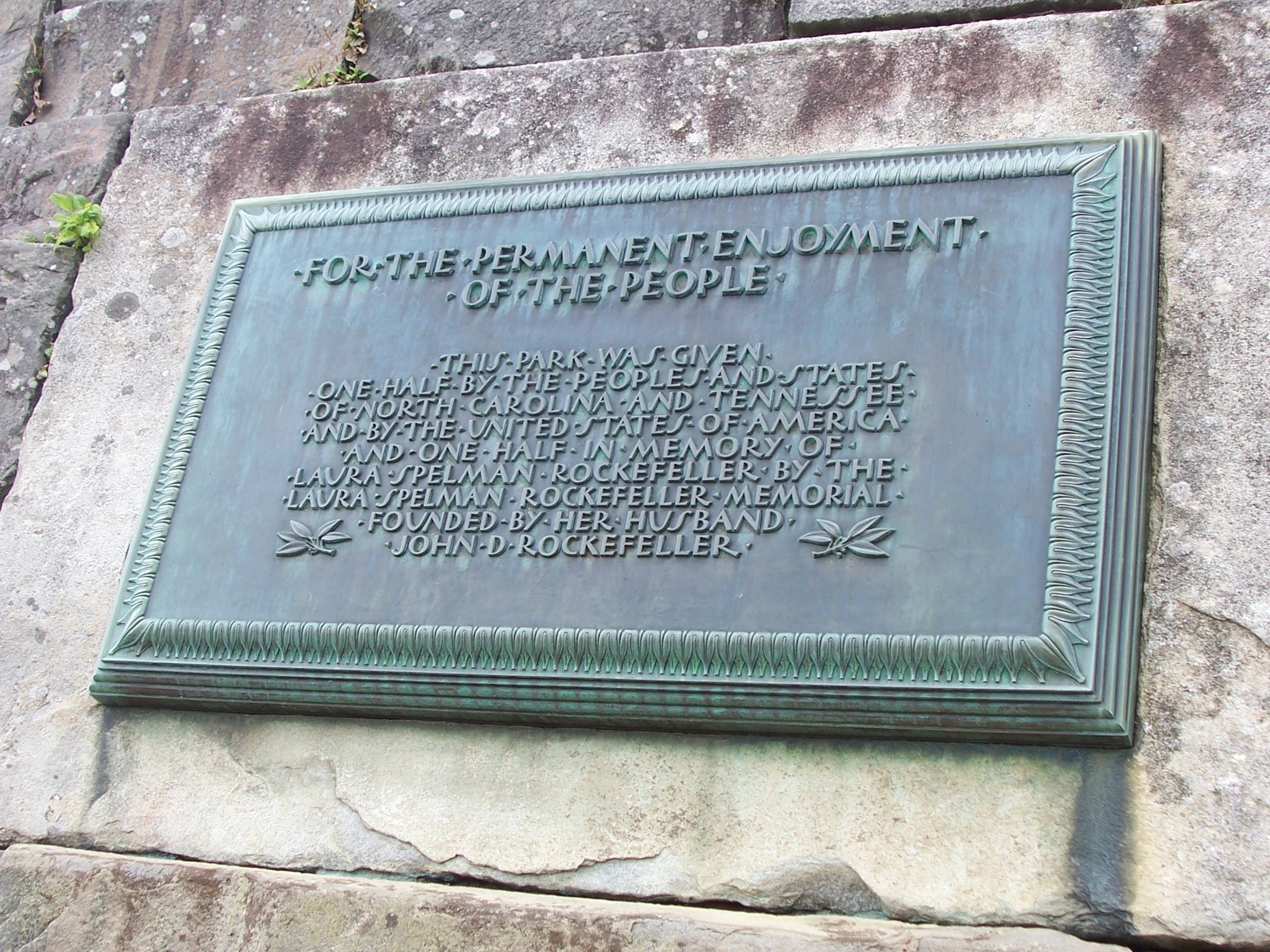 The history of the park is dated back to the 1890s when the idea to create a public land reserve was suggested by some optimists with a desire for others to enjoy the areas natural environments.  A bill was presented to the North Carolina state legislature during this period, unfortunately, it didn't pass.  However, with a lot of persistence, a bill was finally passed in May of 1926 for The Great Smoky Mountains National Park and The Shenandoah National Park to be established.  The bill was signed by President Calvin Coolidge.  The efforts made to get this bill past was encouraged by the idea of travelers wanting a paved road to enable them to drive through the National Forests.  Some of the leading voices of influence were motorists and auto clubs such as AAA.
With the bill now passed, the dream was finally happening, but not without problems.  Now, with the bill passed, the plans were in the hands of The Department of the Interior to administrate and oversee the project that a Park would be protected once 150,000 acres of land was purchased. The Government could not purchase land for the use of a National Park so other individuals such as political boosters, raised funds in the amount of two million dollars from both North Carolina and Tennessee.  Now with four million dollars available to start the project, it still wasn't enough to purchase all of the land necessary to establish the National Park.  Local individuals started raising funds for this project including school children having a penny drive to raise additional funds.  By 1928, five million dollars had been raised.  Arno B. Cammerer, National Park Service Director, had discussed the urgency of the park with John D. Rockefeller and that the park was worth their investment to spare it from being ravished by large lumber companies and because it held value.  After being convinced, Mr. John D. Rockeller invested in the project to save the park and make it a National Park. The Laura Spelman Rockefeller Memorial Fund matched their contributions with five million dollars.  This enabled the process of purchasing land to begin, and the dream was becoming a reality.
Now that the funds were available to begin this large project, there were complications in doing so.  Thousands of acres of farms and properties had to be surveyed.  Appraisals also had to be done.  Every piece of land had to be purchased, meaning the lumber and paper companies established there would have to be purchased along with their equipment.  Unfortunately, for some individuals, this meant the loss of their homes and farms.  However, there was a lifetime lease that was offered to certain individuals who were too old or sick to leave their homes.  However, their stay was only temporary.  Short term leases were also granted, upon the notion that the individuals had to relinquish their rights to hunt and trap or cut timber.

In 1934, the Federal Government received transferred deeds from the states of North Carolina and Tennessee for three hundred thousand acres.  As a result, a public facilities development was authorized by Congress.  Early development was handled by the Civilian Conservation Corps (CCC).  The CCC restored buildings, built bridges, made trails and campgrounds before they were shut down when WWII began.  The CCC worked on this project from 1933 to 1942.

Today, a lot of the CCC's work can still be enjoyed by individuals.  The Great Smoky Mountain National Park is the most popular park in the United States attracting over nine million visitors annually.  The Park was established on June 15, 1934.  The total Park is 521,896 acres.  For more information about The Great Smoky Mountain National Park and its history, you can contact the Park by calling: (865)436-1200.

Laura Celestia Spelman was the daughter of Harvey Buel Spelman, a businessman, and Lucy Henry Spelman, his wife.  Laura's nickname was Cettie Spelman.  She was born in Wadsworth, Ohio on September 9, 1839. She had one older sister named Lucy.  The Spelman family moved to Akron for business growth opportunities, and then to Cleveland.  Cettie was extremely motivated by her mother's beliefs of strong religious values, devoted to the church, and the cause of temperance.  Cettie was strong-willed and independent.  She gave her Valedictorian speech at her high school graduation at the young age of fourteen.  One of her classmates that was present during her speech was John D. Rockefeller, who was at the time a friend.

Cettie along with her sister Lucy wanted to become a teacher.  In 1857 Cettie and her sister attend finishing school located in Worcester, Massachusets.  After leaving school, they returned to Cleveland to start their new careers.  In 1859, Cettie was inspired to start music classes. Unfortunately, her attempt was unsuccessful, and she substituted for her sister Lucy in public school. In 1860, Cettie was offered a permanent teaching position at Hudson Street School.  She was known as a perfect teacher among her colleagues.  And by 1862, she became Assistant Principal.  In this same year, she began a courtship with Mr. John D. Rockefeller.

Mr. Rockefeller married Laura Spelman on September 8, 1864, he married Laura Spelman.  They bought their first house in Cleveland, Ohio, next to John’s parents.  There, on August 23, 1866, they had their firstborn, a daughter named Elizabeth Rockefeller.  The Rockefeller’s had five children, four girls and finally a boy, which was named after his father John D. Rockefeller.  Unfortunately, their second daughter, Alice only lived for thirteen months.  The Rockefellers were Baptists who were very active in their church.  They also became very wealthy rather quickly.  And with a family so large, they needed more room, so in 1868, they moved to a larger house on Euclid Avenue, in Cleveland, which later became known as “Millionaire Row”.

Laura was a very passionate mother.  Each of her and John’s children had chore responsibilities to do as well as their studies, and to learn music.  The children were compensated for their chores.  The church was the center of their social life.  Each child was taught to give a portion of their earnings away at a young age.  The children joined a temperance society and pledged abstinence in their youth.

During this period Mr. Rockefeller spent most of his time in New York on business, missing holidays with his family.  The long-distance relationship became burdensome, and John Rockefeller moved his wife Laura and their four children to New York to be with him.  During the winter months, they lived in hotels until they bought a brownstone home in 1884.  Laura and their children did a lot of traveling between homes.  Eventually, the family started traveling as a whole to Europe and out West.

Wherever the Rockefeller’s went, they always made church attendance a priority.  Laura served as a Sunday School Teacher.  Laura taught children from a young age through their college years.  Laura was a friend and a mentor to these children and they would often visit her home.  Laura was very close with her family, and after the death of her Father in 1881, her Mother came to live with the Rockefellers until her death in 1887. Laura's sister Lucy had also lived with her after giving up her teaching career shortly after the Rockefellers moved in their house on Euclid Avenue.

In his younger years, their youngest John D. Rockefeller Jr. attended schools, while his sisters had already received their education at home.  The children started growing up and leaving home, getting married and eventually having their own families.  The Rockefellers had fifteen grandchildren, and some of them lived close by, allowing Laura to spend a lot of time with their Grandbabies as they grew.  During this period the Rockefellers purchased another home in Pocantico Hills, New York.  However, their house burned in 1902.  So, they built another house large enough to house their visiting family, grandchildren, and friends.  This house became a favorite of Laura’s as well as Forrest Hill.

Laura’s health started to decline.  Laura was a semi-invalid, and as a result, by 1910 became bed-ridden.  Through her illness and struggles her faithful and loving husband John, remained by her side.  The two celebrated their Fiftieth Wedding Anniversary on September 8, 1914, in Pocantico Hills.

Laura passed away on March 12, 1915, of a heart attack, while her husband John was in Florida with their son and his wife.  He received a telegram informing him of the death of his wife. The funeral was at Pocantico Hills, three days later.  It was a simple funeral with family and some friends attending.

In October of 1918, John D. Rockefeller Sr. established the Laura Spelman Rockefeller Memorial, in honor and memory of his late wife.  New York State incorporated the fund for philanthropic causes.  Over the next decade, the fund expanded interest in welfare problems to support social science.  The funds grew to over seventy million dollars.    The Board of Trustees authorized Beardsley Ruml to be the overseer of the fund.  He directed the fund until 1929, whenever the fund consolidated with The Rockefeller Foundation.  Up until this time, the memorial made numerous contributions to support a variety of causes and organizations, including aid relief for overseas and within the United States.  The final amount funded was $10,000,000, given to The Spelman Fund of New York to support child studies, interracial and parent education.