This historic home was built in 1830 and was located right in the middle of the last great battle of the Civil War, the Second Battle of Franklin, which took place on November 30, 1864. Union forces commandeered the house and used it as their headquarters. The Carter family, for whom the house is named, hid in the basement along with several others including the Lotz family, who lived just up the street (their house is its own Clio entry) while the battle took place. Today, the Carter House is part of the Battle of Franklin National Historic District, which is a National Historic Landmark. It is also on the National Register of Historic Places. Tours are available daily. The State of Tennessee has owned the house since 1953, when it was saved from demolition.

The Carter House was built in 1830 and was used as the headquarters for Union forces during the Battle of Franklin. 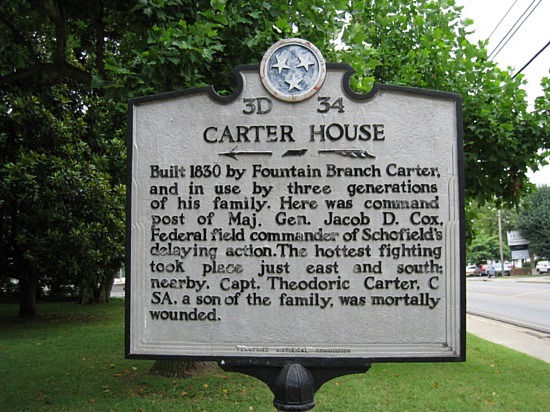 Union Brigadier General Jacob D. Cox, the senior officer who took control of the Carter House, was given the task of defending a mile-long Union line while engineers two repaired bridges that spanned the Harpeth River (the plan was for the Union troops to march north Nashville to help defend it). Union troops numbered around 27,000 and the Confederates had around 20,000. Before Union troops could retreat at the planned time of 6 p.m., the Confederates attacked at 4 p.m., charging the Union line.

Many Confederates broke through but Union forces held firm. The hand-to-hand combat of this battle was particularly fierce; piles of bodies were a common sight. The Union won the battle — suffering approximately 2,300 casualties while the Confederates lost over 6,000 — and retreated toward Nashville. For the Confederates, the battle was especially bad because numerous officers and senior officers were killed, mortally wounded, or captured. The Carter family suffered as well. A member of the family, Todd, fought in the battle and was mortally wounded; he died the next day.

Fountain Branch Carter completed the house in 1830. The Federal-style brick house was accompanied by several other structures, including a farm office, a smokehouse, and a kitchen. In the 1850s, Carter built a cotton gin on the property, though the cotton gin no longer stands. Tod Carter, the middle son of Fountain Branch Carter, was mortally wounded in the Second Battle of Franklin. He was brought to the house after the battle, where he lived for a few more hours. The room where he died is one of the highlights of the guided tour of the house.

The house, the farm office, the smokehouse, and the kitchen still stand, and between them, there are more than 1,000 bullet holes still visible — a testament to the horrors of war.