Owl's Head light was originally built in 1825 but was eventually rebuilt due to deterioration. John Quincy Adams authorized the building and the government paid for the construction costs. The first keeper, Isaac Stearns, resided at the lighthouse and made $350 a year. Although it only stands 30-feet tall, with the cliff, the lighthouse is 100-feet over the water and has a 16 nautical mile range. Local legend claims that a dog once saved a mail boat from certain destruction at this location and became a hero in Owl's Head.

This photo shows Owl's Head Light after its reconstruction 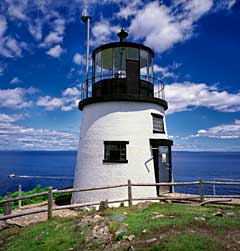 The keeper's house, which was originally constructed in 1856 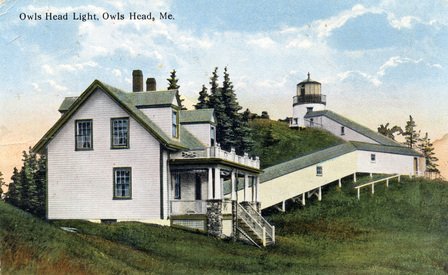 President John Quincy Adams authorized the building of Owl's Head Light in 1825. The lighthouse was needed due to the growing lime trade in Rockland and Thomaston, nearby towns of Owl's Head. Green and Foster and Jeremiah Barry designed the lighthouse. In 1856, a keeper's house was added to the structure. The construction of this lighthouse was significant. It was built at a time when the government was not funding hardly anything; lighthouses were an important priority. They were mainly built in areas that navigation was difficult in.Who the first keeper should be led to a debate between President Adams and the overseer of lighthouses in Maine. Adams' candidate was selected. Isaac Stearns became the first keep and made $350 a year. In 1895 an oil building and a generator house were built. After this, due to the deterioration of the original lighthouse over the years, the old lighthouse was demolished and a new one was built. The American Lighthouse Foundation has been responsible for the upkeep ever since.

Because the lighthouse is located on such a high cliff, it did not need to be tall; Owl's head light is only a 30-foot tall cylinder. With the cliff, it stands 100-feet above sea level and has a range of 116 nautical miles. The fog signal sounds two blasts every 20 seconds. In 1989, the lighthouse became automated. Now, it is a part of Owl's Head Light State Park and can be visited. Coast Guard personnel now occupy the keeper’s house.
An interesting fable, although local townspeople claim it to be true, associated with the lighthouse is that of Spot the dog. The lighthouse keeper at the time trained Spot to ring the fog bell when boats were coming, especially for the Martincus mail boat, which would honk its horn back at Spot. One night, the fog bell was frozen in place, but Spot heard the Martincus mail boat approaching in the water. He ran to the edge of the cliff and barked at the boat until it was safely around the rocks in the shallow water.