This Gothic Revival-style home belonged to Newton Bateman in the 1850s. He was an educator and friend of Abraham Lincoln. Bateman was a principal of West Jacksonville District School, which is believed to be the first free public high school in Illinois. Bateman and Lincoln became friends after they had offices next to each other in the Illinois Capitol in Springfield before Lincoln left for Washington D.C. 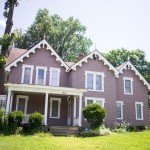 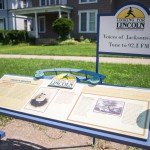 In 1822, Newton Bateman was born in New Jersey. At the age of 11, his family traveled to Illinois to live. From a young age, Bateman had the desire to attend and graduate from Illinois College. Bateman entered into his profession as an educator at the age of 23. He began teaching at a private school that he started. Afterwards, he taught mathematics at St. Charles College in Missouri. Upon moving back to Illinois several years later, he became a school principal in Jacksonville. He bought this home in 1851 and expanded it in the following years. In 1859, he was elected Illinois state superintendent of instruction. He served five terms in the position. Afterwards, he was the president of Knox College from 1875 to 1893. Bateman’s work at the college helped shape the college into one of the best in the midwest.

Bateman first met Abraham Lincoln while he was attending Illinois College in 1842. During his time at IC, Bateman helped create the fraternal-literary group Sigma Phi Society. The group made Lincoln an honorary member.

Bateman was one of the people to deliver the official convention delegation to the Lincoln house in Springfield after Abraham Lincoln received the Republican presidential nomination in May of 1860. Bateman met with Lincoln and discussed his selection. The two had close contact while both working in Springfield. Bateman had a fondness for Lincoln, stating, “the very streets seemed brighter when Abraham Lincoln appeared in them.”