This marker denotes the location of Camp Opelika, one of four prisoner of war camps built in Alabama during WWII. Construction began in September 1945 and was completed a short time later. At its peak, the camp held 3,000 prisoners, most of whom were German soldiers. The first prisoners to arrive were captured in North Africa (they were part of General Erwin Rommel’s Africa Corps). Nothing of the camp's structures remains, as they were dismantled after the war. The area has since been an industrial area.

Camp Opelika held 3,000 prisoners of war during the last couple of years of World War II. It was one of four such camps in the state. 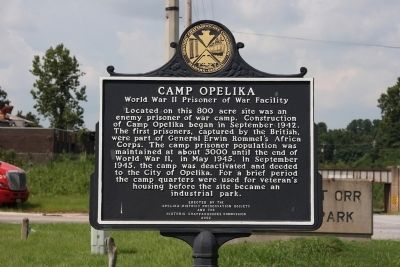 Prisoners lived well in this camp and the others throughout the country. The conditions were stipulated by the Geneva Convention which called for the fair treatment of prisoners. As a result, few soldiers tried to escape and those who did were quickly captured or shot. Prisoners were allowed to work in and outside the camp in businesses, farms and other places that needed help. They were able to get an education (many prisoners were professors and teachers), form clubs and orchestras (the orchestra in Camp Opelika was especially good), play sports (primarily soccer), and participate in other activities as well. Many also formed close relationships with locals; oftentimes these relationships lasted for decades.