On July 1, 1945, an electrical storm caused the crash of a B-29 Superfortress near this location in rural Kentucky. The crash killed nine of the ten men aboard, the lone survivor parachuting to safety. This monument was dedicated in 2008 and honors the crew who perished near this location.

This monument honors the victims and sole survivor of a B-29 crash that occurred on July 1, 1945 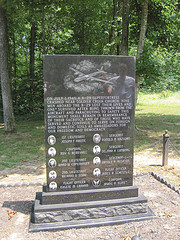 On July 1, 1945, a B-29 Superfortress based at Kirtland Air Force in Albuquerque, NM crashed in rural Kentucky while on a routine flight.  The plane had refueled in Nashville and was on its way to Colorado before returning to New Mexico.  Corporal Irving Elias, the lone survivor of the crash was thrown from the tail of the aircraft after hearing a loud explosion.  Elias was able to successfully deploy his parachute and survived the fall of almost 8,000 feet.
Elias sought shelter from the heavy rain and electrical storm by staying under a bush until daybreak when he walked to the residence of Maxine Bohannon who took Elias to a hospital in nearby Benton.