Whereas most of Salem's tourism industry focuses on the events of 1692, the New England Pirate Museum tells the story of the other notorious crimes of New England's colonial era. The pirates were infamous for looting ships sailing along the northeast coast as well as the tropics. Visitors to the museum are treated to a guided tour which includes a recreation of the seaport, a pirate battle, and the bat cave where the outlaws dwelled.

Exterior wall of the museum, which shows several pirates climbing the wall (Photo courtesy of the New England Pirate Museum) 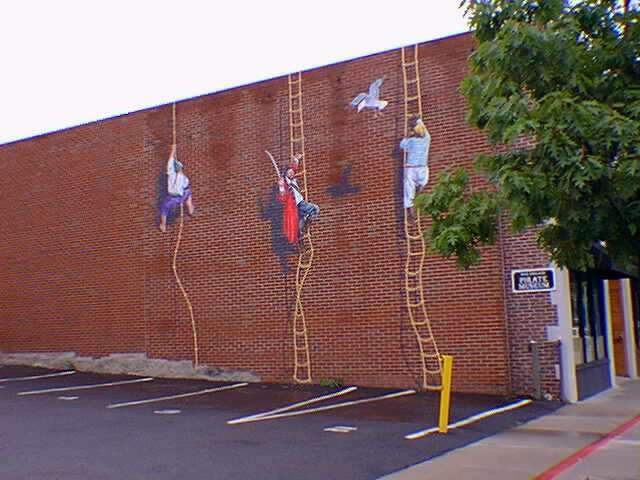 At the end of the seventeenth century, many of the townspeople were seeking to rid their community of the imagined crime of witchcraft.  At the same time, bands of pirates were plundering merchant ships off the coast of New England. The New England Pirate Museum on Derby Street is devoted to the story of these privateers and the historical imagination of piracy.

The museum exhibits include information on several pirates who sailed off the coast of New England, often called “the Gold Coast.” The guides will tell you that many of the pirates would loot boats sailing in the Caribbean or otherwise tropical seas during the winters and then come north, to the waters off New England, to plunder during the summer. Much of their booty is reportedly buried on the small islands dotting the northeast’s coast. Captain Kidd, the infamous Blackbeard, and Sam Bellamy are just a few names mentioned on the tour. Shown above is a picture of one of these pirates, called Black Sam Bellamy. According to the museum’s website:

Not much is known about the early years of Sam Bellamy. Having heard of the wreck of a Spanish treasure ship in the West Indies, Bellamy left Cape Cod to search for the treasure. Unsuccessful at treasure hunting, he joined a pirate crew and within a year commanded his own vessel. After looting some forty Spanish ships, Bellamy came upon the English galley "Whydah" sailing home from Jamaica with a rich cargo of goods including much silver and gold. After a three days' chase, Bellamy took the "Whydah" without a fight. With the "Whydah" as his flagship, Bellamy sailed north. In April of 1717, off of Cape Cod near Wellfleet, the "Whydah" ran into a nor'easter. The storm forced the ship onto the shore where it was smashed to pieces killing Bellamy and over 100 of his crew. Recently the wreck of the "Whydah" along with much of its treasure was discovered by Barry Clifford in the shallow waters off of Wellfleet.[1]

In West Yarmouth, there is now another museum called the “Whydah Pirate Museum” which is popular with families visiting Cape Cod. Other biographies of pirates with ties to the New England area are accessible via the link below.

At the museum, visitors are offered a 20-30 minute tour which is led by a very animated pirate guide.  First, visitors are led through the "Artifacts Room" of authentic pirate treasures. They will have a chance to meet the shady residents of Old Salem's Dockside Village. Next, there is a colonial seaport, where they can board a pirate ship and explore an eighty-foot bat cave.  Some of the old colonial pirates might still be hiding in the dark crevices of the cave. As of October 2017, ticket prices for museum admission range from $10.00 for adults, $9.00 for Senior citizens (65+) and $8.00 for children ages 4-13.