Statue of the first African American President of the United States, Barack Obama, along the Paseo de los Presidentes in Puerto Rico

As of 2017, Ten United States Presidents have made official visits to Puerto Rico. Nine of those presidents have been honored by life-sized bronze statues adorning the walkway, Paseo de los Presidentes, on the south side of San Juan, Puerto Rico's El Capitolio de Puerto Rico - the island's capitol building. President Barack Obama was the ninth president to visit the United States territory on June 14, 2011 and his statue was erected on President's Day, February 20, 2012. 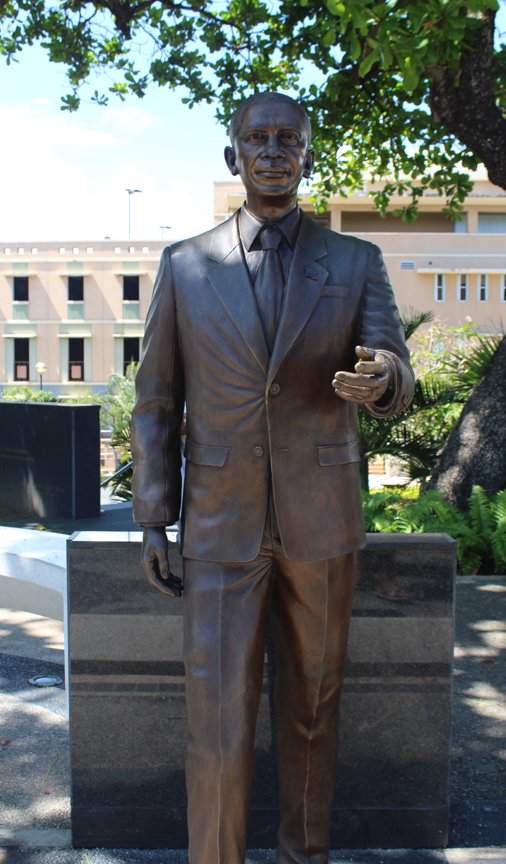 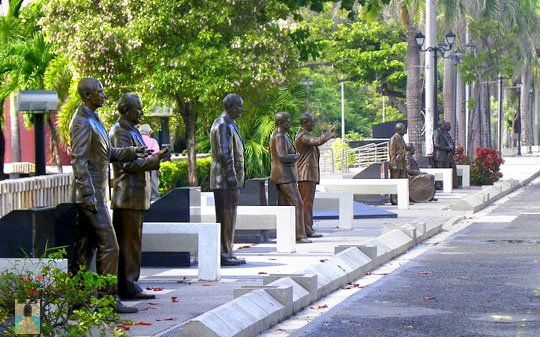 A banner in San Juan, Puerto Rico welcomes President Barack Obama on his visit to the island. His visit was the first in fifty years since the last official presidential visit. 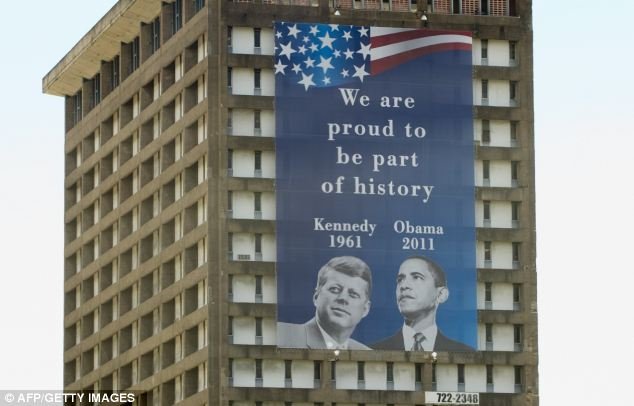 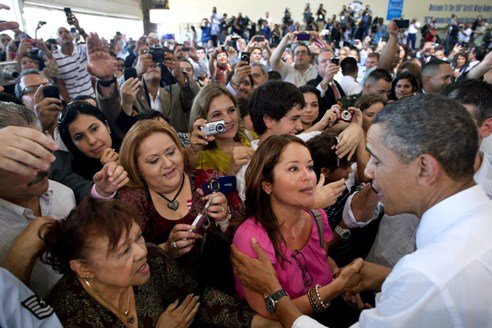 On November 19, 1493 Christopher Columbus landed in Puerto Rico, known as Borinquen by the Taino Indians who lived there. Columbus claimed the land for Spain and named it San Juan Bautista and, later, the Spanish began calling the island Puerto Rico, which means “rich port.” The island remained under Spanish rule until 1897, when Puerto Rico was granted autonomy by Spain through the Charter of Autonomy. Unfortunately, the autonomy was short-lived as the Spanish-American War broke within the year. In July 1898, American troops landed in Puerto Rico, and the United States acquired Puerto Rico through the Treaty of Paris. Puerto Rico remained under direct military control, until Congress ratified the Foraker Law, in 1900, to establish a civilian government.

In 1917 the Jones Act replaced the Foraker Act, granting American citizenship to Puerto Ricans and providing them with protection under the Bill of Rights. In 1947, the United States government gave Puerto Rico the right to elect its own governor and Luis Munoz Marin became the first elected governor of Puerto Rico. In 1950, the United States Congress authorized Puerto Rico to draft its own constitution. Finally, on July 25, 1953, Puerto Rico was transformed from an American territory to a commonwealth. However, it is important to note that Puerto Rico operates as a territory. As recently as 2011, Former President Barack Obama’s Task Force determined that under the Commonwealth option, Puerto Rico would remain, as it is today, subject to the Territory Clause of the U.S. Constitution. Again, while Puerto Ricans are United States citizens, they cannot vote in the general presidential election, do not pay federal income taxes, and their one Congressional representative has limited voting privileges.

Ten United States presidents have made presidential visits to Puerto Rico since the islands became a U.S. territory in the aftermath of the Spanish–American War of 1898. President Theodore Roosevelt was the first sitting president to visit Puerto Rico arriving on November 21, 1906 after inspecting the Panama Canal. The second president to visit was Herbert Hoover in March of 1931. President Franklin D. Roosevelt visited Puerto Rico July 6th and 7th in 1934 on board the USS Houston. President John F. Kennedy and his wife visited Puerto Rico on December 15th and16th in 1961, spending the night as guests of Governor Luis Muñoz Marín. President Barack Obama made his official visit in June 2011 and President Donald Trump visited Puerto Rico on October 3, 2017, after hurricanes devastated the island. Unofficially, four United States presidents made trips to Puerto Rico during their administration. President Dwight D. Eisenhower also visited Puerto Rico on his way to a goodwill visit to South America on February 22, 1960. Harry S. Truman spent one day on the island on February 21, 1948. President Lyndon B. Johnson privately visited Ramey Air Force Base in Aguadilla from March 2nd through the 4th in 1968. Finally, President Gerald Ford spent three days in Puerto Rico in June 1978 and although it was an unofficial visit, he was welcomed to the island by then Governor, Rafael Hernandez Colon upon his arrival.

The trip that earned Former President Obama his bronze statue, took place in the summer of 2011 when he addressed a crowd in San Juan regarding the Puerto Rican economy, employment, and thanking Puerto Ricans for their service, specifically, Juan Castillo, a World War II and Korean War veteran, as well as other vets serving in Iraq and Afghanistan from Puerto Rico. Obama met with Puerto Rican officials, toured the Governor's mansion, and attended a campaign fundraiser.

Puerto Rico and her people have had a bit of a tumultuous relationship with the United States since the Treaty of Paris. There is much debate regarding the future of Puerto Rico’s status with the United States, with the majority of residents split between statehood and remaining as a commonwealth. A smaller population advocates for independence. However, during the Obama administration, many Puerto Ricans were enamored by the nation’s first African American president and, like many other across the U.S., saw themselves represented for the first time by a person of color.

Bras, Marisabel. The Changing of the Guard: Puerto Rico in 1898. Hispanic Divison Library of Congress. 2011. http://www.loc.gov/rr/hispanic/1898/bras.html.