In the mid-1880s, laborers were needed to construct new railroads in the area of Florida. This spot commemorates the location of the arrival of the first Africa- American workers who came to this area to work on these railroads. The place was named for the famous reformer Booker T. Washington. These African-Americans worked on building the J.T. and K.W. Railroad lines and constructed a bridge which linked the railways between Tampa and Jacksonville.

The marker, front side, relating details of the story of the area it commemorates. 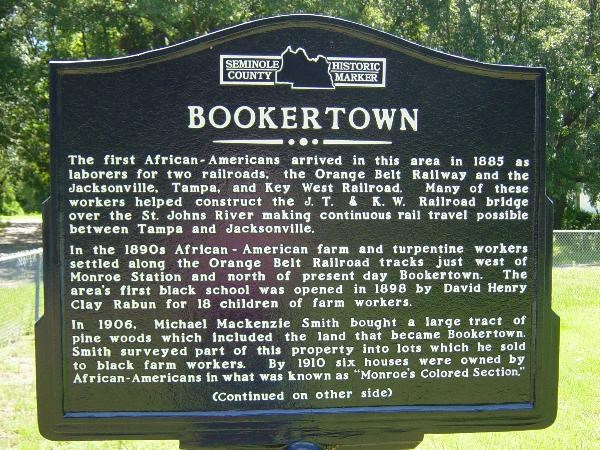 reverse side of the marker telling more of the story. 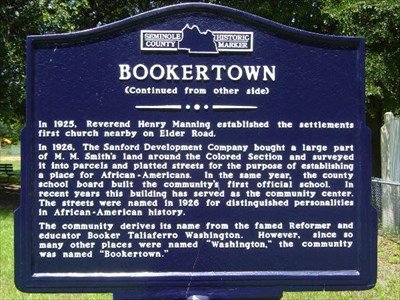 The area offered work to those coming into the town of Sanford. As more arrived, these African-American workers began settling along the railroad. As time went on, more and more blacks started buying sections of land from investor Michael Smith, who had purchased large tracts of land in the area in 1906. Soon, a school was built for the children of the people who had bought and were working the land as independent farmers. This area became known as "Monroe's Colored Section."

In the 1920s, the Sanford Development Company parceled out the land, built streets, and laid out a plan for an area where black Americans could live, worship, attend schools, work, and enjoy the freedom to live and be productive and have a community. Here, the streets were named to commemorate prominent African Americans like Paul Lawrence Dunbar, W.E.B. Dubois, Richard Allen, and Frederick Douglass. The area itself was named after Booker T. Washington, who advanced the cause of black education and rights in the early 20th Century.

Many of the areas farms grew celery which became the crop that replaced the citrus crops which had been ruined by the heavy winters of 1894-95. The celery and other vegetables were much hardier than the more delicate citrus fruit. Collecting the sap of the local pine trees was another source of income for the area. The sap was used to make turpentine. Wood was also harvested for use as fuel for the early steam engines used on the railroads.