These historical markers located along the Appalachian Trail offer information about the infamous "Lost Orders" of General Robert E. Lee. Near this location, Lee reportedly lost Special Order 191, and speculation and debate continue to fascinate professional and amateur historians alike who debate the question "what would have happened had these orders not been lost"...would the Confederacy have succeeded in their invasion of the North? In general, most historians agree that the Union failed to capitalize on the discovery of Lee's order and also agree that Lee's invasion into Maryland would have still been repulsed by the Union, although McClellan might have been less willing to attack and may have also been less confident in his response. 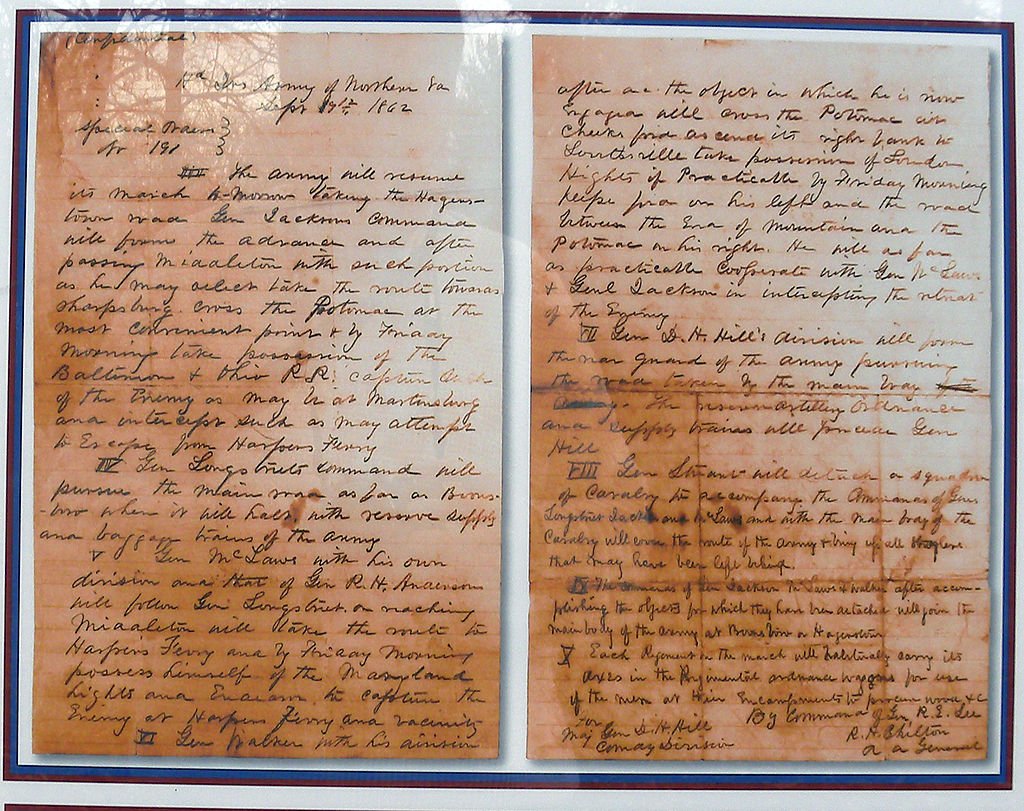 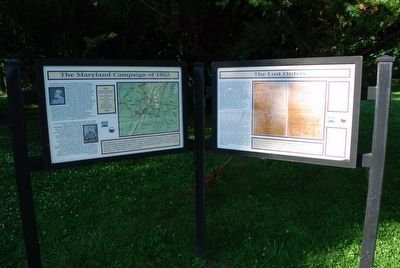 Lost Orders Marker right panel with copy of Special Order No. 191 and its contents 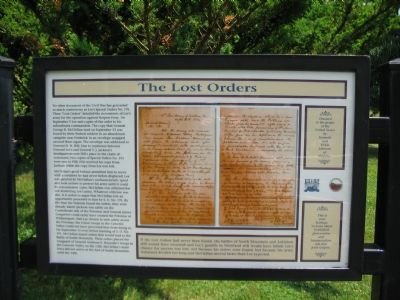 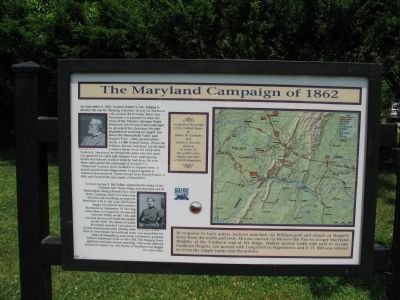 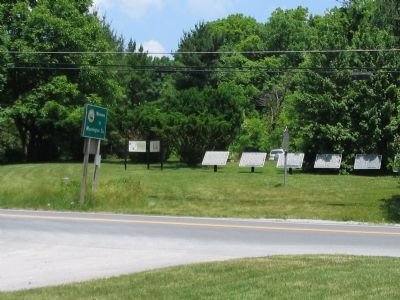 General Robert E. Lee’ drafted Special Order No. 191 on September 9, 1862, during the Maryland campaign before the Battle of Antietam.  Special Order No. 191 contained details about the movement of Lee’s Confederate Army for the operation against Harpers Ferry.  The Confederates were coming off their victory at the Second Battle of Bull Run and entered Maryland, crossed the Potomac River and camped on the Best Farm (now part of the Monocacy National Battlefield).  This was the first major invasion of the North by the Confederacy, and the first time the Confederate army crossed the Potomac River with the intention of attacking Union-held territory in Pennsylvania. The objective was not the capture of Union territory, however, but rather to turn Union sentiment against the war effort by convincing Northerners that the war was unwinnable.

To achieve this goal, General Lee split his army into four columnns and sent three of the four columnns to Harper’s Ferry to seize the three high points above the town in hopes of boxing the Union force in and forcing them to surrender or fight. After eliminating the potential threat to his supply line, Lee hoped to reunite his forces at Boonsboro or Hagerstown, Maryland.

When the Confederate army marched from Frederick to carry out the order, a copy was either dropped or lost.  To this day, it is unknown who lost the order but Union forces encamped along the Monocacy River discover Special Orders No. 191 in an abandoned campsite near Frederick in an envelope wrapped around three cigars with the envelope addressed to General D.H. Hill.

General McClellan, responded with a message to President Lincoln, “I have all the plans of the rebels, and I will catch them in their own trap.”  Following Special Orders No. 191, General McClellan launched attacks resulting in the Battle of South Mountain and led to his decisions that led to the Battle of Antietam. General Lee was forced to make a stand at Antietam, which was not part of his original plan.

McClellan’s good fortune permitted him to move with a certainty and speed that he had never before displayed in battle.  The federals clashed with Confederate units that General Lee had sent into the three rugged passes over South Mountain, Crampton’s Gap, Turner’s Gap, and Fox’s Gap.  As a result of that battle, Lee leaves Maryland by pulling back across the nearby Potomac into Virginia, but McClellan did not move fast enough to trap Lee who gathered most of his army along the banks of Antietam Creek.

The battle of Antietam fought there was the bloodiest single day in American history.  With the invasion ended and five days following the battle of Antietam, President Lincoln issues the preliminary Emancipation Proclamation changing the nature of the Civil War.  The significance of the Proclamation was that it provided a victory Lincoln needed to issue his preliminary Emancipation Proclomation. The order declared the Union's intention to free slaves in states that were still in rebellion and also decreed that African Americans could join the Union Army. As a result, the war became something more than simply a question of the preservation of the Union, but a war to eradicate slavery.

The significance of the “Lost Orders” remains a topic of debate among military historians and Civil War buffs.  Major Walter Taylor, an aide to Lee, professed a divine hand.  He called the lost order a turning point and concluded, “It looks if the good Lord had ordained that we should not succeed.”  General Lee said, “Had the lost dispatch not been lost, and had McClellan continued his cautious policy for two or three days longer, I would have had all my troops concentrated on the Maryland side, stragglers up, men rested and intended then to attack McClellan, hoping the best results from the state of my troops and those of the enemy.  Tho it is impossible to say that victory would have certainly resulted, it is probable that the loss of the dispatch changed the character of the campaign.”

The Lost Orders Memorial is located at Fox’s Gap, where on September 14, 1862, the Union 9th Corps pushed its way over the mountain through an outnumbered Confederate resistance.  The Battle of South Mountain became a little-known prelude, which is now remembered by a handful of monuments in the woods at Turner’s Gap, Fox’s Gap, and Crampton’s Gap.  The Lost Orders memorial marker sits next to markers on the Maryland Campaign of 1862 and six War Department markers on the Battle of South Mountain, Boonsboro, Maryland.