Originally the English-style estate of prominent Philadelphia lawyer, William Hamilton, The Woodlands is now a rural cemetery, garden and historic site. Located in the University City neighborhood, what was once over 300-acres has since been reduced to 54 and includes Hamilton’s 18th century, Federalist-style mansion, carriage house, stable, and green house. The grounds and cemetery are open daily from dawn until dusk and tours of the mansion are offered on the hour, Wednesdays, from 2:00-6:00 from April through October. The mansion was designated a National Historic Landmark and added to the National Register of Historic Places in 1967. In 2006, the cemetery and associated buildings were also so designated, creating a National Historic Landmark District.

The Woodlands Federal style mansion with its impressive portico. 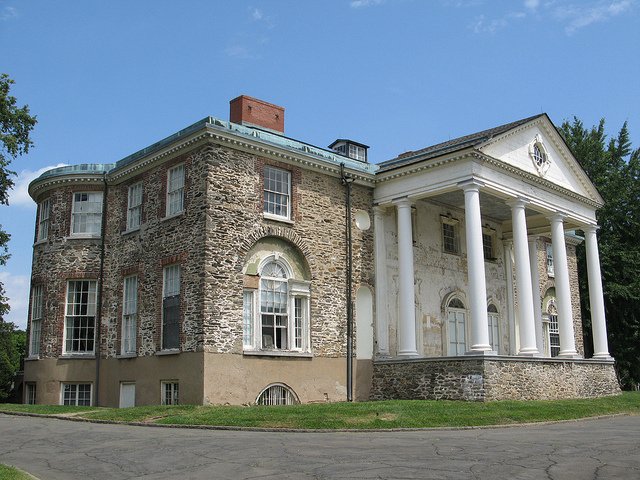 Visitors gather on the back lawn of the Woodlands mansion. 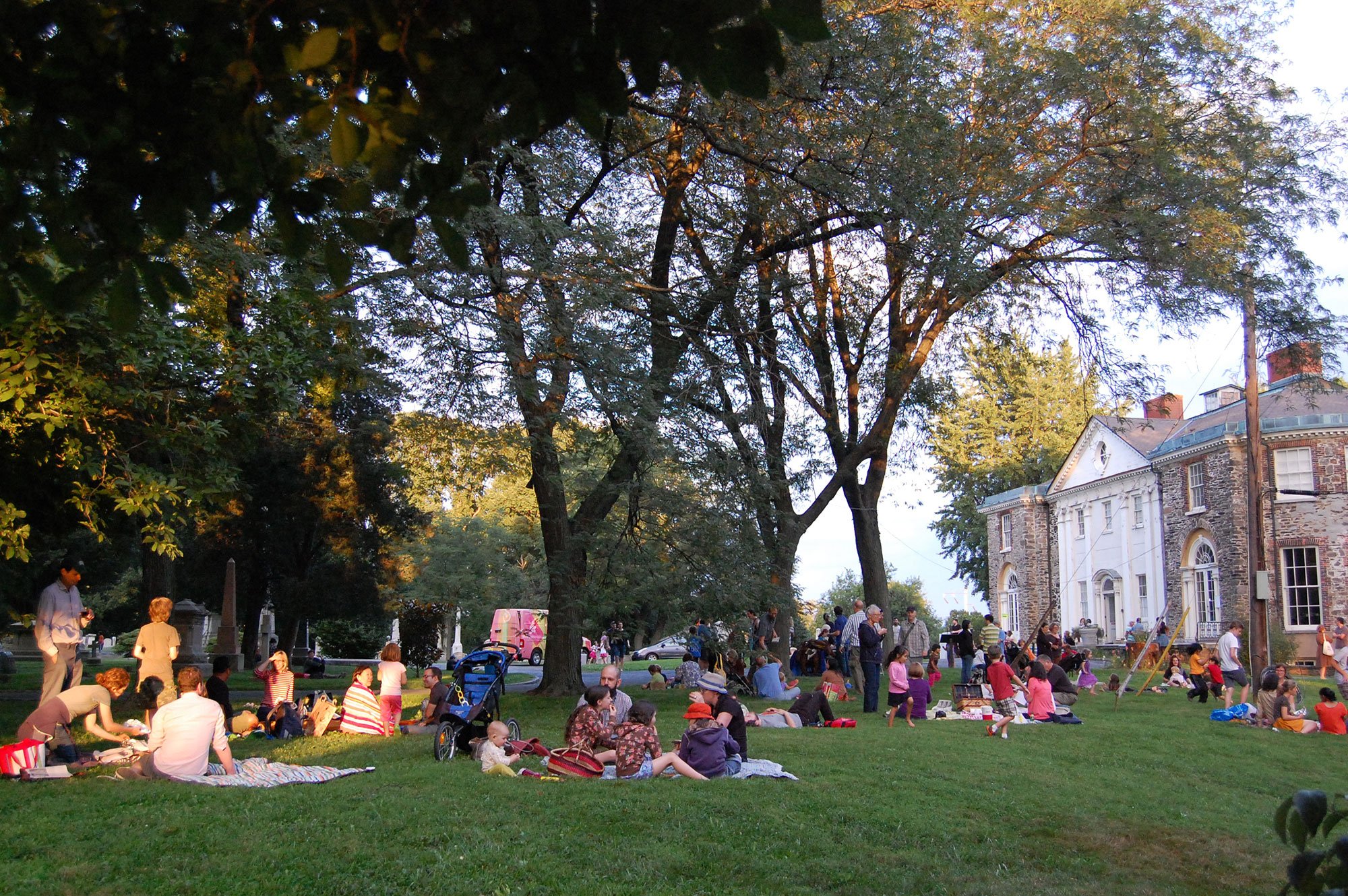 The sun rises on the funerary art at the Woodlands cemetery. 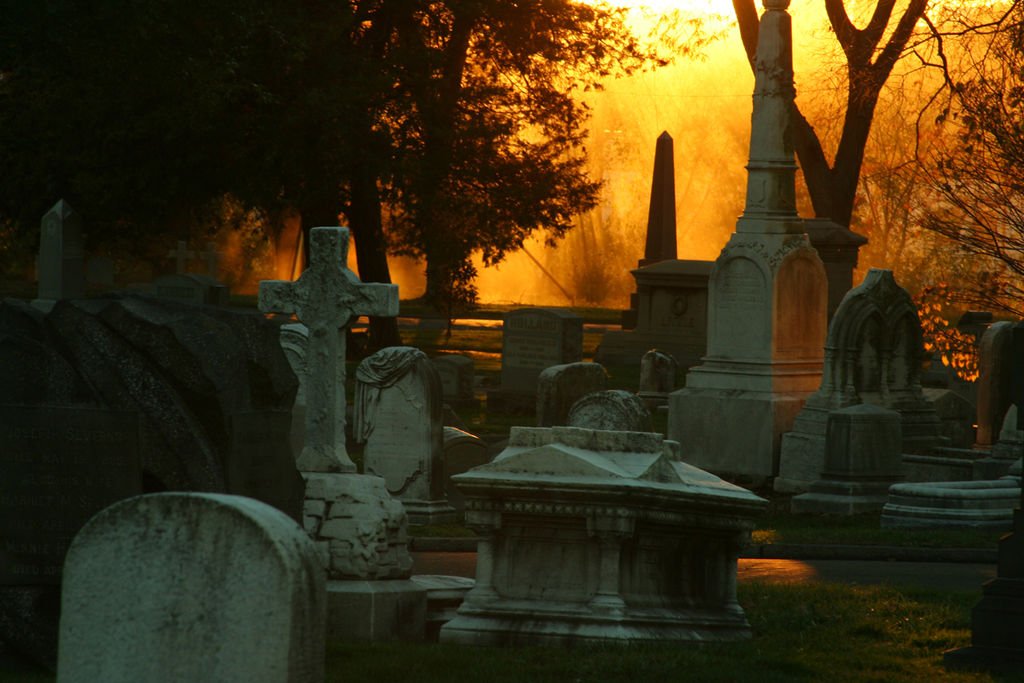 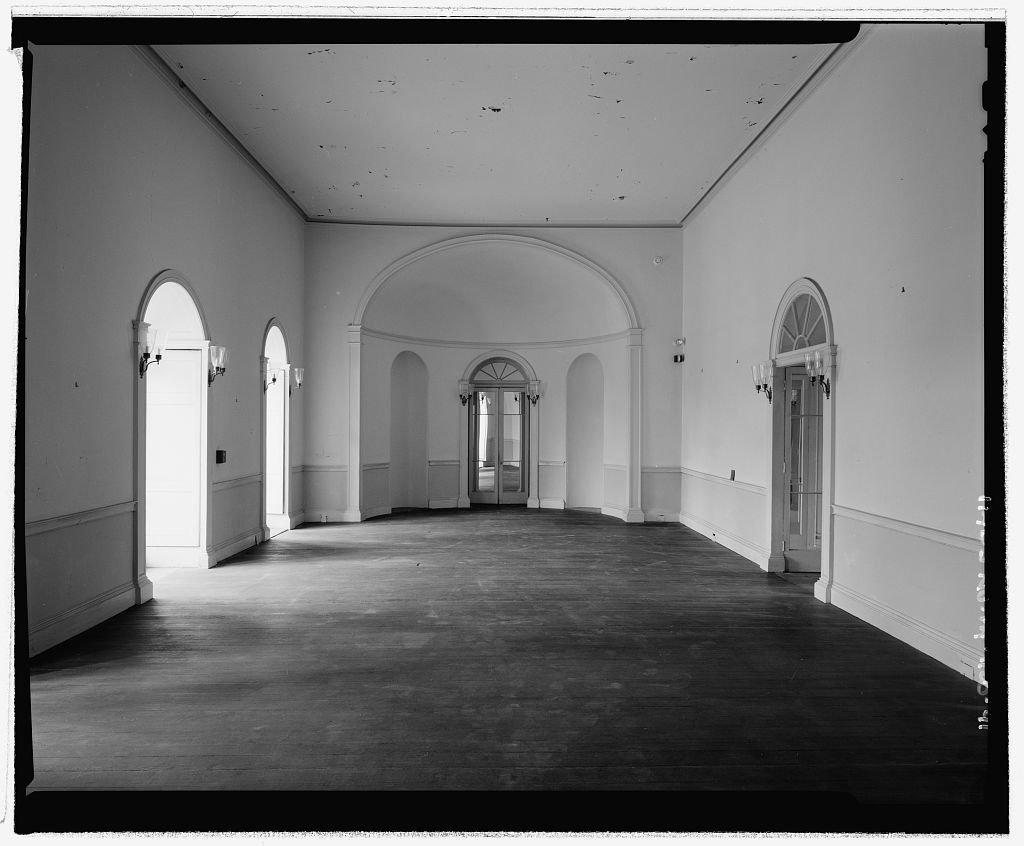 A c.1792 watercolor of the Woodlands by James Peller Malcom, showing the mansion as seen from the bridge at Grey's Ferry on the Schuylkill River. 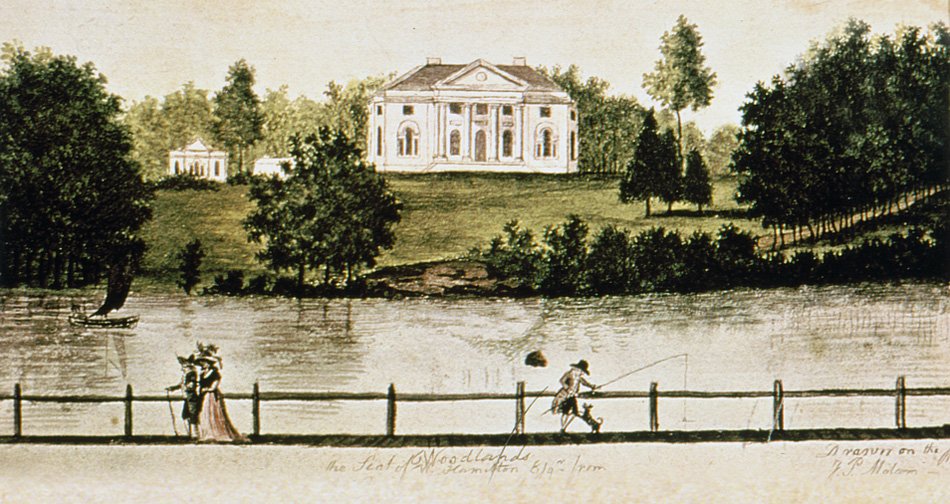 The land that would eventually come to be known as the Woodlands was purchased by William Hamilton’s grandfather, Andrew, in 1735.  The land, along the Schuylkill River, overlooked Grey’s Ferry and was briefly held by William’s father, Andrew Jr., until his death in 1746 when it passed to the 21-year old William.  William promptly turned it into a family country estate, to include the addition of a two-story, neo-classical house with a columnned portico, one of the earliest in America.  However, after a 1786 visit to England, Hamilton returned with new inspiration to recreate an English-style estate on his land.  To that end, he doubled the size of the house to 16 rooms, to include a domed vestibule, full kitchen and service amenities.  In expanding the home, Hamilton transformed it into a Federalist style mansion that ushered in the popularity of that architectural style in the young United States for decades to come.

It was also during his visit to England that Hamilton was inspired to create an English garden to surround his newly expanded home.  Already an avid botanist, Hamilton directed the addition of 1,000s of species of plants on his estate, to include the earliest introductions of Ginkgo biloba, Paper Mulberry, and Lombardy Poplar to America.  He also added species from seeds provided to him from the Lewis and Clark Expedition (a result of his friendship with President Jefferson), such as the Osage Orange.  He was also part of an international network of amateur botanists that shared plants, seeds and ideas and included Hamilton’s local contemporaries, John and William Bartram.  When Hamilton died in 1813, his obituary included the following line, “The study of botany was the principal amusement of his life.”

After Hamilton’s death, sections of his estate were sold off by his heirs to developers as Philadelphia’s expanding population sought housing.  To prevent its total absorption, the Woodlands Cemetery Company was formed in 1840 and purchased 92 acres of the former estate on which to create a rural cemetery, similar to the Laurel Hill Cemetery.  Today, over 30,000 people are interred at the cemetery, to include Civil War generals (John Abercrombie and David Birney), members of the U.S. Congress (John Scott and James Campbell), philanthropists and industrialists (Anthony Drexel and John Edgar Thomson), and artists (Anna Claypoole Peale and Sam and Ida Waugh).  The Woodlands is also part of the Woodlands National Recreational Trail and includes an arboretum, community garden and apiary.

"History of the Woodlands."  The Woodlands.  Accessed September 25, 2017.  http://woodlandsphila.org/history/

Grounds: Daily from dawn to dusk Mansion tours: Every Wednesday on the hour from 2:00-6:00, April through October.