Following the Battle of Stones River (December 31, 1862- January 2, 1863) local citizens and soldiers did the best they could to hastily bury the men who perished in the battle. Following the end of the war, the federal government established Stones River National Cemetery. Today the cemetery holds over 6,000 Union soldiers and is preserved by the National Park Service along with the adjacent Stones River Battlefield. The park is home to numerous monuments and a museum and visitor center. The National Battlefield offers tours as well as biking and hiking paths that include a number of interpretive signs.

Overview of the rectangular cemetery. 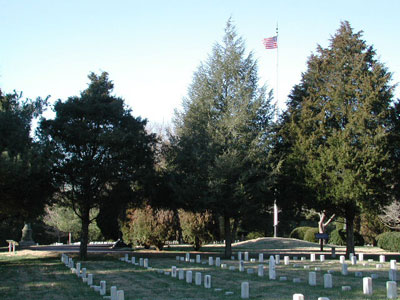 Murfreesboro spans both sides of the Stones River and was the site of a three-day battle between Union forces led by General Rosecrans and Confederate troops under the command of General Braxton Bragg.

The battle saw 23,000 casualties and about 3,000 men perished from their wounds. Rosecrans and Bragg both planned to attack their opponent's right flank, but for three days, neither was able to achieve this objective or deliver a decisive blow to their enemy. While Confederate forces pushed the Union back, they later retreated owing to the Union's capacity to maintain a strong defensive line and withstood repeated attacks by the Confederates. Owing to delayed supplies, the Confederacy was not able to take advantage of their initial momentum. General Breckinridge, who had joined Bragg in the fight, was ordered to attack the strongly held Union position on a hill.  The Union had the upper hand with their vantage point and overwhelming firepower forced the Confederate soldiers to withdraw.

After the battle, Union troops fortified the town and it became a supply depot.  Creation of the cemetery began in 1865 and within the next three years, the remains of 6,100 Union soldiers were reburied in the cemetery. The cemetery has two monuments: The U.S. Regulars Monument which commemorates the men who were part of the Union's Western Regular Brigade and were killed during the battle. The second monument is dedicated to the 43rd Wisconsin and the 108th Ohio regiments. These two regiments protected Nashville and the Chattanooga Railway line during the Union siege.