The Centre Harbor Village Historic District of Centre Harbor, NH is a collection of organically laid out residential and commercial buildings that showcase a broad selection of architectural styles from the early 19th to early 20th century. The Historic District features some of the best preserved Victorian structures in New Hampshire, as well as a number of structures featuring Classical and Greek Revival influences. The district has been recognized for preserving well the residential standards of the average 19th-century citizen in the town.

A Photo of the Iconic Fountain in the Historic District, by SatyrTN in June of 2007, Creative Commons Licensed Attribution 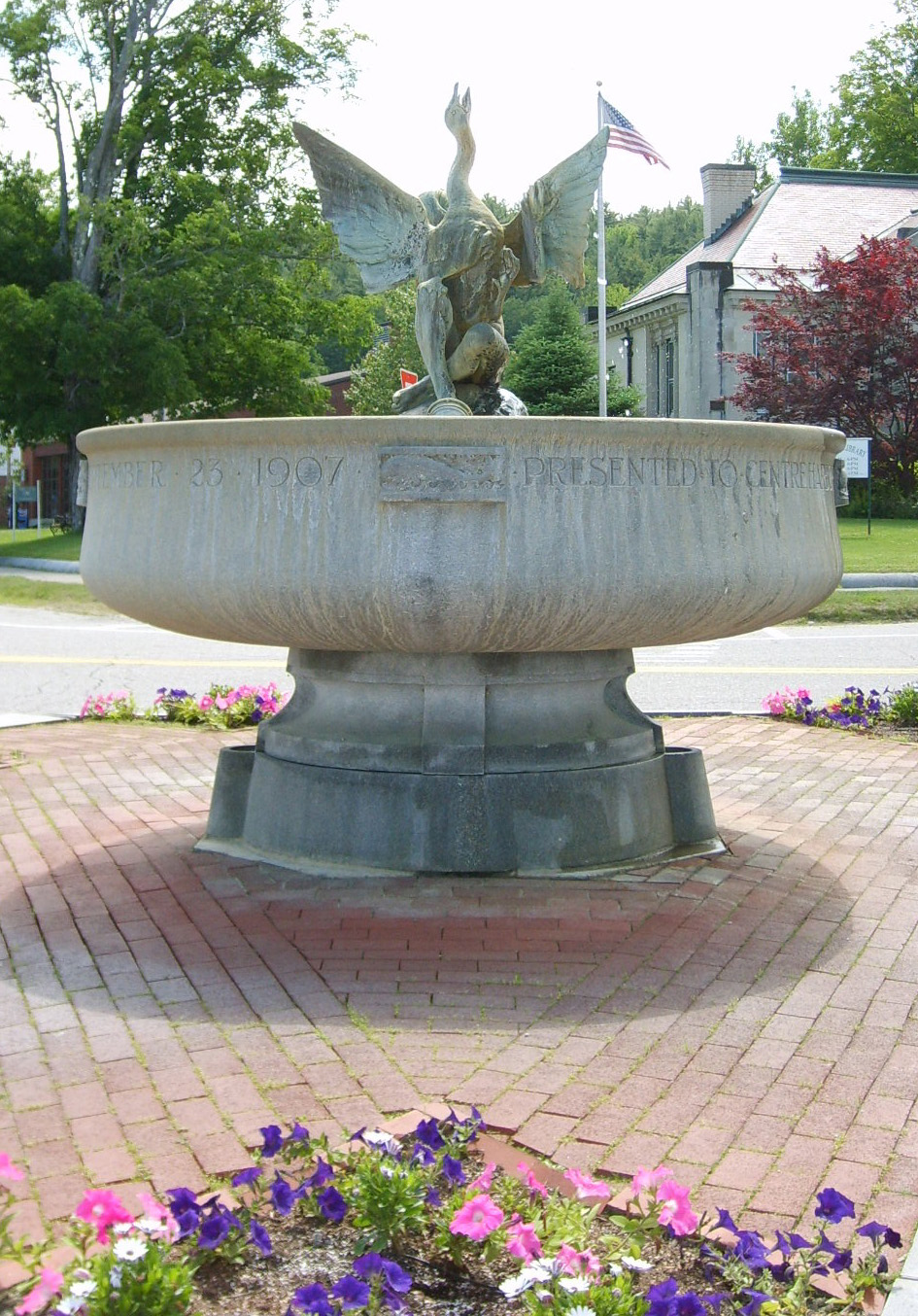 Centre Harbor’s location between the Lakes of Winnipesaukee and Big Squam arose as a result of trade route practicality, but, as a result, offers the historic district an incredible view of the surrounding wilderness even to this day.  Lake Kanasatka and the small mountain of Red Hill, both which lie nearby, served to further funnel travel through the route that Centre Harbor would ultimately arise around.

The rise of the steamboat proved to be one of the most influential technological changes to the city, turning Centre Harbor from a small village containing just about 30 buildings in 1837 to a bustling port town in the late 1840s.  Centre Harbor was an ideal town for steamboat transit, having a notably wide bay that made navigation leisurely for captains of large steamboats.  Because railroads did not reach the White Mountains region of New Hampshire until later, steamboat travel was the prevailing method for vacationers seeking the famous vistas of White Mountains.

Because of the rise of tourist travel to Centre Harbor in the mid-19th century, the town’s hospitality industry flourished, leading to the construction of a number of major hotels.  Some of these hotels laid within the bounds of the Historic District.  At this time, large estates owned by wealthy citizens seeking views of natural beauty were constructed along the lakefront.

The Historic District is largely comprised of buildings that arose during the period between the arrival of steamboats to Centre Harbor and World War I, with one exception.  The Locust Cottage still stands as an example of the common residence of the town’s earlier days, when it was little more than a hamlet at the crossroads of trade routes.  The Locust Cottage is described in full below.

Most of the residences in the district were constructed in the Victorian style of architecture and have been well preserved.  While the district was not officially added to the National Register of Historic Places until the 1980s, the historic district has gone nearly unchanged since the 1920s, partially as a result of a diversion of commercial attention from the town center since the 1950s.  Centre Harbor Historic District is therefore widely recognized as a fantastic snapshot of 1920s life.

A description of the notable structures in the district follows:

A residence that has served many diverse purposes since its construction in the mid-1800s, the Raines House has at various times been a guesthouse, a girls’ house, a residence, and a college dorm building.  The exterior of the building is in a clapboard style and remains virtually untouched since the late 1800s at least.  The Raines House designation includes a barn on the property behind it, which is simple in construction but characteristic of the era.

The Coe House was designed in 1820 for the then-owner John Coe.  Nearly 30 years later, his family members remodeled the house into the Victorian style, which was coming into vogue at the time.  The Coe House was adopted by Belknap College, which did make some exterior renovations to the structure in the 1960s (before the Historic District was officially recognized.)  As a result of the renovations, the Coe House displays a mosaic of various styles which are distinct but function well together stylistically.

The Coe House is connected to the barn on the property.  The designation for the property now contains a modern basketball court and a large field, both of which lie behind the house.

The Morse and Stanley block was originally constructed as a store in 1837, making it one of the earlier buildings in the village.  Throughout the 19th century, however, the block underwent many renovations.  Further renovations were made in the 20th century.  The appearance now is described by the National Park Service as “a late 19th century building with 20th century modifications,” as the block features wide, modern store windows on the ground floor.

Similarly to the Morse and Stanley Block, the Kahle House was originally a one-story shop that was either heavily renovated into or completely replaced by “Independence Hall,” a two-story public hall designed by James P. Leighton (the designer of the Morse and Stanley Block renovations.)  The Kahle House as it now appears was designed by Albert Bennet sometime around 1920, who purchased the building and set to renovating it heavily.  Following Bennet’s renovations, the Kahle House had become a four-story hotel connected to the building next door, an inn known as the Garnet Inn.  The Garnet Inn is also a designation within the Historic District.

Records show that the original construction of the Garnet Inn stood as early as 1832, though there is little record to show how its current appearance compares to its original appearance.  The Garnet Inn was most famous as a seasonal hotel that operated during the summer, though it was originally a residence.  It was connected to the neighboring Kahle House following a major renovation to the Kahle House in the early 1920s.  Since the 1920s, only one change has occurred to the Garnet Inn, which is an alteration to the railings that run along the connecting porch roof between the Kahle House and the Garnet Inn.

Perhaps the most significant of buildings in the district, the Locust Cottage was a summer home built for David Drake in 1800.  Almost no changes have been made to the building since its construction in 1800, and those changes that were made were almost all non-public facing.  The only public-facing modifications to the house can be found in the new front door, new siding on the northeast-facing gable wall, and a modern deck added on the eastern side of the building.

The Locust Cottage is the only preserved building that can be directly tied to the village’s early history.

Constructed sometime in the mid-1800s, the Dr. Morrill House was named after Dr. Leonard B. Morrill, who lived in it for many years.  Dr. Morrill was the town’s physician at the time, and his home is a Victorian style house that was originally designed with clapboard sidings.  The clapboard siding was, unfortunately, replaced with asbestos siding that covered up some of the original features of the house.  On the property, however, is a garage that still retains the clapboarding.  The entire property is surrounded by trees, except the front side.

Constructed in 1852, the Page House was likely constructed by the man it was named after, Dr. John C. Page.  Page lived in the house from its construction until the day of his death in the late 1800s.  The house is clapboarded and is constructed in the mid-Victorian style.  The house is unique in that there is a central courtyard framed on three sides by the house that contains a clapboarded wellhouse.  Also on the property is a clapboarded garage.  All portions of the property have been fantastically preserved on the exterior, with almost no changes made whatsoever to any portion of the house or the smaller structures on the grounds.

The only major notable change to the site as a whole was the construction of a modern-style tennis court on the rear lawn of the house, which is surrounded by trees and shrubbery.

The Kona Drinking Fountain was a gift to Centre Harbor by a Herbert Dumaresq, a successful Bostonian businessman who owned a nearby farm, the namesake of which was the fountain itself.  An inscription was carved into the bowl of the fountain which recorded the dedication of the fountain to the town.  The Kona Fountain features granite carved dolphins, and a small statue carved by notable sculptor Samuel Russell Gerry Crook.

Gifted to the citizens of Centre Harbor by New York merchant James E. Nichols, who had previously lived in the town, the Nichols Memorial Library was designed in the Classical architectural style by Charles Brigham, an architect from Boston.  Erected by a construction firm based in New Hampshire, the Nichols Memorial Library had its groundbreaking in late 1909 and was prepared for public use by mid-1910.

The library’s gable roofs are one of its most notable and attractive features, and its front face contains the iconic pediments and entablatures that characterize the Classical architectural style.  The Nichols Memorial Library has been wonderfully preserved, and, as a result, its remarkable design details have earned it a position of particular respect within the Centre Harbor Village Historic District.

The Centre Harbor Village Historic District stands today as one of the best snapshots of 19th century life in the State of New Hampshire, well-preserved in a town that has not been the center of tourist attention for some time.  While the sudden growth coaxed on by the rise of the Steamboat led to the trampling of certain historical features, the quietness of Centre Harbor through the late 20th century has allowed historians to delve deeply into a trove of architectural history.