Constructed in 1890, the Review Building remains one of the tallest structures in Spokane. The building was designed by architect Chauncey Seaton and designed to connote the authority his newspaper sought while also fitting the irregular lot that publisher W.H. Cowles had acquired. This building was home to the Spokesman, one of many Spokane newspapers in print at the turn-of-the-century. Following the Panic of 1893, the paper meged and became the Spokesman-Review. The building was also home to the Spokane Daily Chronicle until 1921. The size and grandeur of this historic building demonstrates the significance of print newspapers during the late 19th and early 20th centuries. 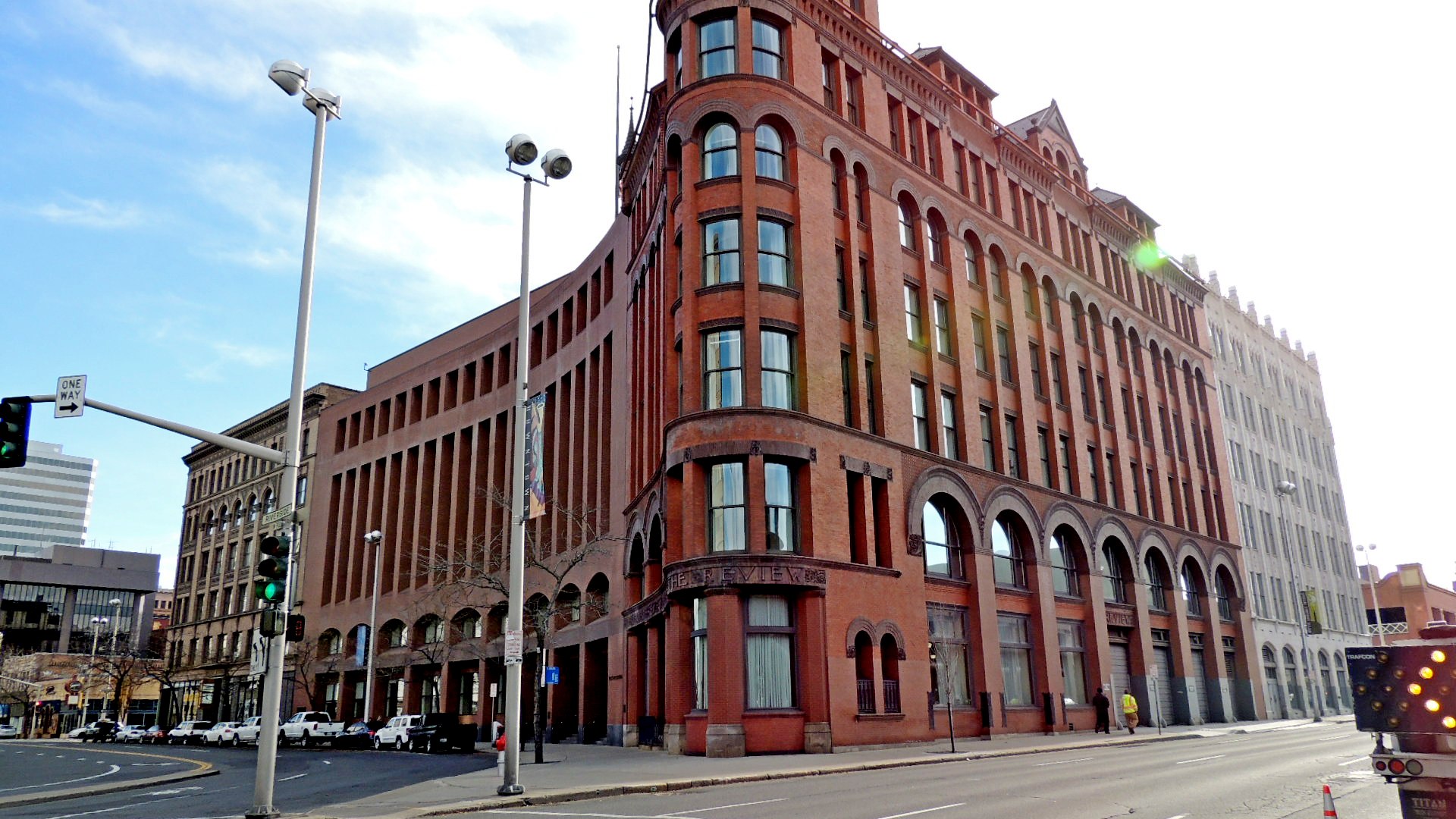 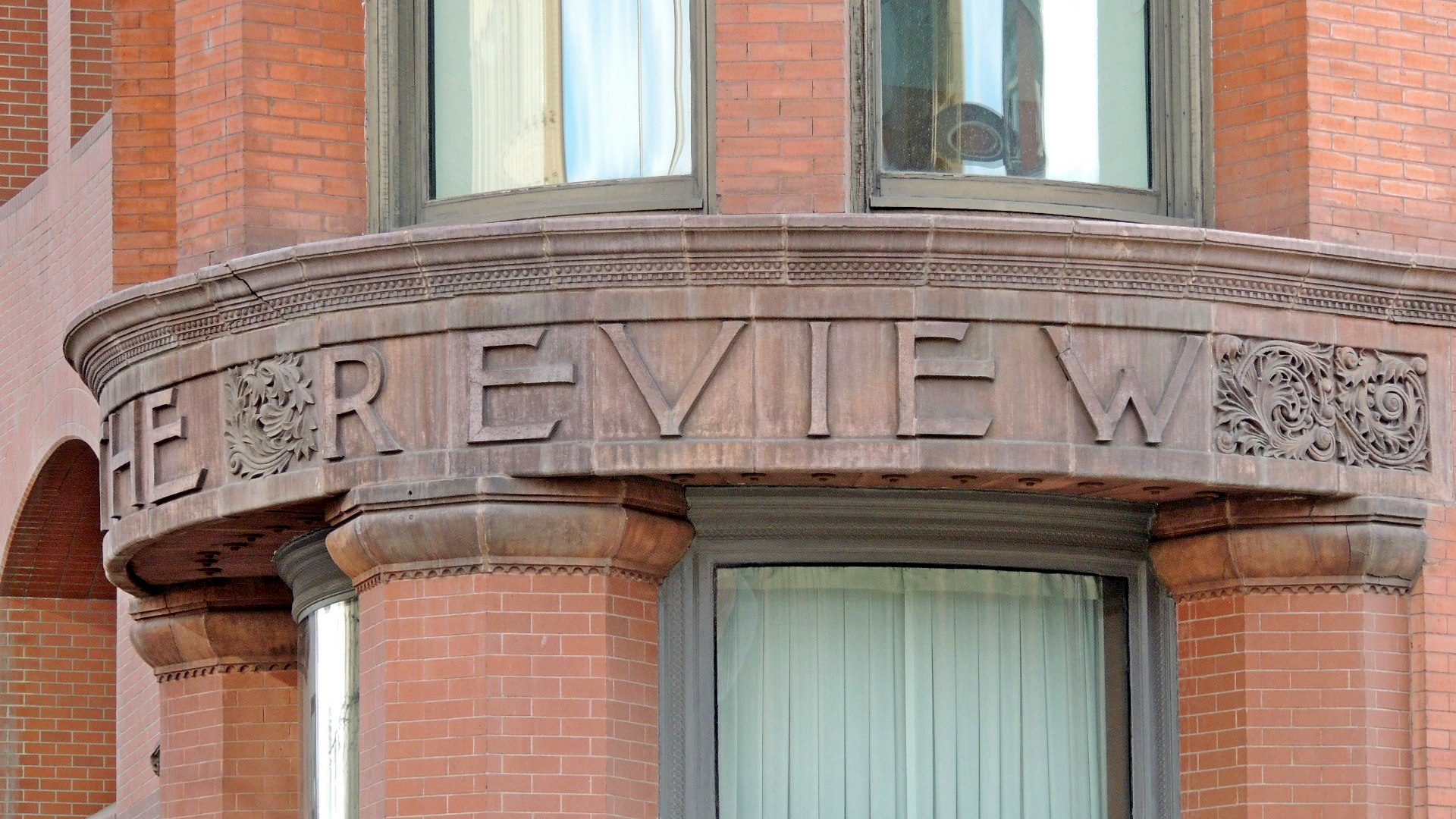 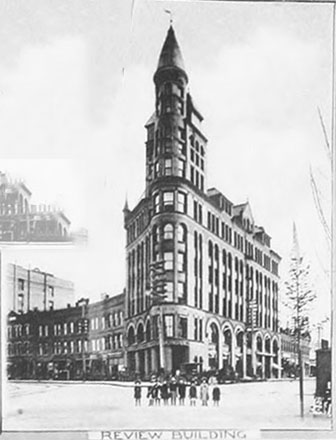 Profoundly influential during the late 19th century, local newspapers competed to gain the largest readership, not unlike current media conglomerates battle for viewers and social media visitors. The Review Building demonstrates the power and significance of a newspaper, as well as the standard practice of newspapers, like any business, seeking methods for which to draw attention to its product -- a form of advertising, if you will.
Frank Dallam arrived in Spokane in 1883 before the city's population boom. In fact, with on 1,500 residents, Spokane existed as a pioneer town when he came from California. As such, only one weekly paper, The Chronicle, operated in Spokane, which Dallam unsuccessfully attempted to purchase.  However, residents approached him later about publishing a Republican-leaning newspaper to counter the Democrat-centric Chronicle. So, on May 19, 1883, Dallam published the first weekly Review using some borrowed equipment. A few weeks later, he obtained his own printing press, which he operated in an old schoolhouse.
Dallam almost single-handedly researched, wrote, and printed the paper. But, he and the city's fortunes changed in 1883 when Andrew Pritchard discovered gold in the Couer d'Alene region. Prichard took it to Dallam's office who then printed the story. By 1884, Spokane's population rose due to the potential for finding gold and Dallam's publication gained prominence in Spokane, including publishing his paper daily instead of weekly, moving into the second floor of the Union Building, and partnering with H. T. Brown and H. W. Greenburg to purchase an Associated Press franchise.
In April 1888,  four staff members of the Portland Oregonian purchased the publication and subsequently bought the lot where the Review Building currently stands.  Harry T. Brown, along with two men from Chicago started the competing Spokesman, which published its first pages on March 9, 1890, including its unique of inclusion of fashion news, gossip, literary reviews, and other new features.
The two papers developed a heated rivalry and openly printed attacks against each other. Indeed, the Review Building was far bigger than necessary, but it served to convey an air of supremacy. That action, as well as efforts by the Spokesman ultimately put the financial health of both papers in jeopardy, notably after the Panic of 1893 and resulting national economic depression.  In time, the rivalry turned into a merger, the Spokesman-Review, which still serves Spokane today from the Review Building.