The future home of the Pauli Murray Center for History and Social Justice, this historic property was once home to Pauli Murray, a leader in the mid-20th-century struggle for the rights of women and African Americans. Murray is remembered as part of the LGBTQ+ community, a trailblazing activist, lawyer, author, and educator, in addition to the first female African- American Episcopal priest. Her efforts supported the passage of Title VII of the Civil Rights Act of 1964, the federal law that forbids employers from discriminating against personnel based on sex, nationality (origin), race, and religion. Pauli Murray’s goals guided her to support the creation of the National Organization for Women (NOW) an organization that promotes full equality for women throughout law and education. Murray’s story and impact continues to make an imprint on the world, her memory has inspired multiple community activities. The Pauli Murray Project has formed walks of Justice to honor the “first freedom writers”, created documentary projects based on “Women of Durham’s Black Wall Street”, and started youth poetry contests about civil rights, social change, and justice. Murray’s house is scheduled to be opened to the public in 2020 as a museum with her story ready to share. 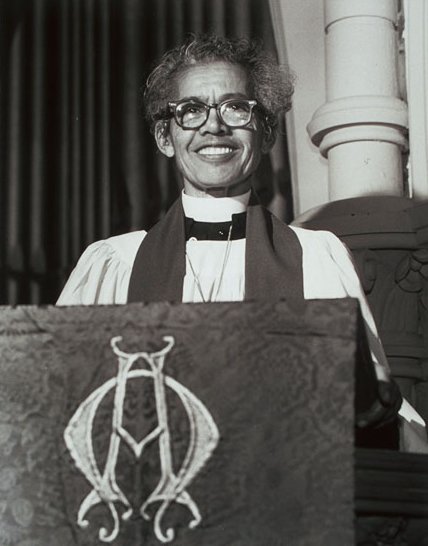 Pauli Murray 's book, "Proud Shoes" is based on a true story of slavery, her mixed race ancestry, and a revealing of a family secret linked to topics of racial identity, miscegenation, and slavery in the South during the pre- Civil War era. 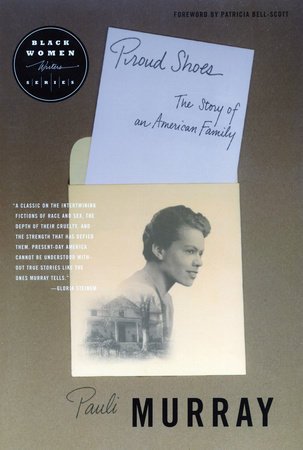 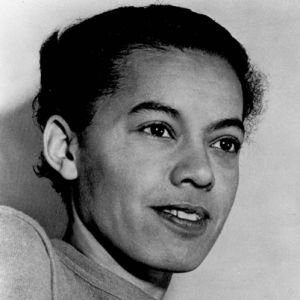 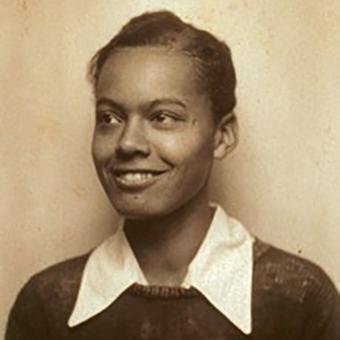 Murray earned a J.S.D (Doctor of Juridical Science) from Yale; she was the first African- American women to be awarded this degree 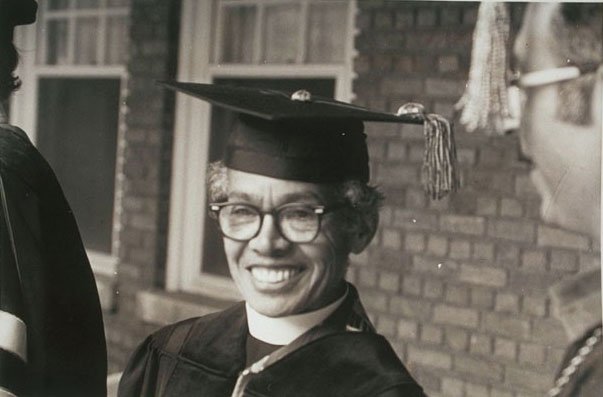 Pauli Murray House Project: Murray is remembered as part of the LGBTQ+ community, a strong-willed activist, lawyer, author, and educator, in addition to the first female African- American Episcopal priest. 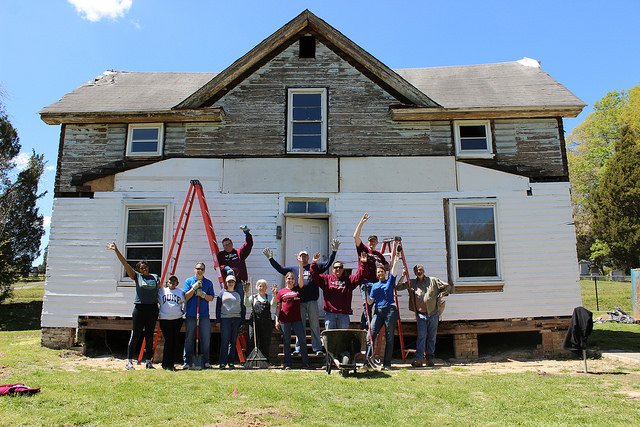 Pauli Murray was born in Baltimore, Maryland on November 20, 1910. A short four years later, Murray moved to Durham, NC to live with her aunt in the home built in the 1910s by her grandparents. Her mother had died suddenly and her father was unable to take care of children. She grew up in her grandfather Fitzgerald’s house, which she describes in her resound book Proud Shoes. Proud Shoes is based on a true story of slavery, her mixed-race ancestry, and a revealing of a family secret linked to topics of racial identity, miscegenation, and slavery in the South during the pre- Civil War era. Murray writes about her Grandmother Cornelia Smith’s birth and how her attractiveness “provoked” the master’s sons to almost murder her grandfather. She also addresses her grandfather marrying a white woman in 1840 and the challenges they went through. Proud Shoes was published in year, 1956.

Before her book was published, she graduated from Hunter College in 1933 and went to work for the Worlds Project Admission (WPA), were she was first employed to teach remedial reading and then put in charge of the Workers Education Project. The Project was a tremendous experience for her, because it connected Murray to young radical intellects who fought for American’s rights. Additionally, she worked with the Workers Defense League and as a teacher in the NYC Remedial Reading Project.

During her 20s, Murray changed her birth name to the gender-neutral “Pauli.” Murray was attracted to women and her longest-lasting relationships were with women. Murray called her short-term marriage with a man a “grave mistake.” Through her activism, Murray worked with other LGBTQ+ individuals of color including Bayard Rustin.

She struggled with her sexual and gender identity throughout her life and wanted to be a man. After taking hormone therapy during her 20s and 30s, Murray eventually settled into being an androgynous lesbian. Today, Murray would likely self identify as a transgender male.

In 1937, Murray was admitted to Bellevue Hospital in New York where she wrote about her sexuality and she hoped to move toward her masculine side. For years Murray discussed the newly developing literature about medical hormone therapy. In the 1930s, Murray was seeking psychological aid and hormone therapy testosterone implants to help “treat” the homosexuality by being more male.

In 1938, she applied to the University of North Carolina at Chapel Hill for grad school. By doing this, her immediate family was afraid that they would be lynched, or that their homes would be burnt down. White supremacists in the area were known to threat and kill African Americans who fought for their rights. There was a real fear her family could be in danger. Murray was later rejected from North Carolina University due to her race. This would not be the only challenge of discrimination Pauli would face in her lifetime.

She was arrested and jailed for protesting Virginia law requiring segregation on buses, entered Howard Law School as the only woman in her class and encountered sex discrimination, partook in restaurant sit-ins attempting to desegregate, and more.  Murray graduated first in her class in 1944 and won the Rosenwald fellowship for her graduate study in law. Her fellowship was created to study at Harvard. However, Harvard University rejected her because of her sex. Until this time, Murray had been focused on African American civil rights, she wasn’t conscious of her “disability” of being a women. In spite of knowing that Harvard did not accept women, Pauli applied. President Roosevelt, who was an alumnus of Harvard, even wrote a letter about why should be accepted into Harvard. Nevertheless, the still denied her application. This same year Murray published her most well-known poem, “Dark Testament".

In 1945, Pauli Murray collected her diploma from the University of California, Berkeley and passed the bar. Her thesis titled “The Right to Equal Opportunity in Employment” was later branded the “bible” for African American civil rights leaders. Between 1948 until 1956, Pauli Murray was in practice by herself. During this time States’ Laws on Race and Color was her research job for the Women’s Division of the Methodist Church. Later, she joined as the only woman in the New York firm of Paul, Weiss, Rifkin, Wharton, and Garrison. Murray realized working on Madison Avenue was not meant for her; it was the wrong place to be. She replied to an ad in a British newspaper and “traveled to Ghana to take a position as a senior lecturer at the Ghana School of Law in Accra.” A year later, in 1961, President John F. Kennedy designated Pauli Murray to the President’s Commission on the Status of Women Committee on political and civil rights. The president’s goal was to examine women’s equality regarding women in “education, in the workplace, and under the law.” They addressed labor and tax laws, the value of legal representation for women, the need for education and guidance for women in the workplace. Murray worked with the chair and friend, Eleanor Roosevelt, and other civil rights leaders, including Martin Luther King.

In 1964, the United States Civil Rights Act passed. Pauli co-authored an article, “Jane Crow and the Law: Discrimination and Title VII”. This was the federal law that forbids employers from discriminating against personnel based on sex, nationality (origin), race, and religion.  A year later Murray earned a J.S.D (Doctor of Juridical Science) from Yale; she was the first African- American women to be awarded this degree. After receiving her degrees, Pauli Murray decided to educate more women and men. She became a vice-president of Benedict College in Columbia, SC and Professor of Law and Politics at Brandeis University. In addition, to her successes in the field of education, she had calling to serve her faith.

Pauli Murray became the first female priest to be ordained by the Protestant Episcopal Church. In an interview, she discussed how the Christian faith is a community of believers and ordained clergy had a special mission to lead the ministry. She stated in an interview with the Southern Oral History Program of North Carolina about her ministry, “I hope that I will continue to do what I have tried to do most of my life and that is, when there was a principle which I felt I ought to act on, I did.” She continued to take action in what she believed in until her death on July 1, 1985. Her influence in leadership, women’s rights and civil rights lives on today. One of her best- known quotes, from Proud Shoes is, "The past is the key of the present and the mirror of the future. Therefore let us adopt as a rule to judge the future by the history of the past, and having the key of past experience that has opened the door to present success and future happiness."

Proud Shoes: The Story of an American Family. NoveList. http://novselect.ebscohost.com/Display/TreeNodeContent?format=html&profile=s4872903.main.novsel3&password=dGJyMOPY8Ui2qLIA&ui=433125&schema=http:&source=124573&version=2.1&print=true.

Moor, Ashley. The 15 most important LGBTQ landmarks in the US. Matador Network. February 07, 2019. Accessed March 17, 2019. https://matadornetwork.com/read/important-lgbtq-landmarks-united-states/.