The Overland Trail Museum commemorates the historic westward migration of gold seekers and early pioneers. The museum was named after the Overland trail stage route that was a branch of the Oregon Trail in Nebraska. The Overland Trail followed the south bank of the South Platte River through northeastern Colorado. It is said that the Overland Trail was the heaviest traveled road in America, maybe even in the world between 1862 to 1868. The museum was opened in 1936 in the original building, which was made of native rock and designed after the early trading forts. In the past 65 years much has been added, not only to the structure, but to the collections which have been donated by local citizens. The village behind the main structure has several buildings from pre-1915; The Stoney Buttes one-room schoolhouse, the Evangelical Lutheran Concordia Church, the Dailey Cash Store, and the granary barn (which has a fine collection of branding irons, saddles, and other farm and ranch equipment.) In addition, there is a well-equipped blacksmith shop and an extensive array of farm machinery. 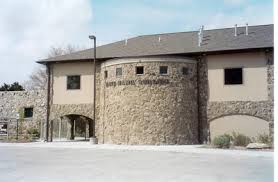