In the early 1900s, Fresno was one of several California cities with a thriving Basque community. The Santa Fe Hotel was built in 1913 to serve the Basque community. The building is now occupied by a restaurant, the Shepherd's Inn, which serves Basque fare. The building, which is listed on the National Register of Historic Places, currently houses a restaurant, the Shepherd's Inn, which served Basque cuisine. 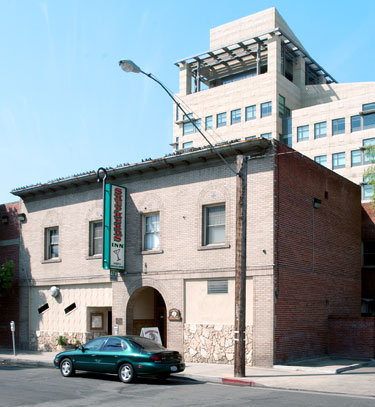 In the late 1800s and early 1900s, a number of Basque immigrants arrived in California, drawn largely by the promise of work as sheepherders. By the early 1900s, Fresno had the state's fourth-largest Basque population.

The Santa Fe Hotel was built in 1913, making it one of the later hotels to be built in the Basque community. It served numerous purposes: not merely a hotel, it served as a restaurant, a community center, a clinic, and a place for nomadic Basque sheepherders to collect mail and store belongings. It even functioned as a retirement home of sorts for elderly sheepherders.

Echeverria, Jeronima. Home Away From Home: A History of Basque Boardinghouses. University of Nevada Press, 1999. pgs 120-123