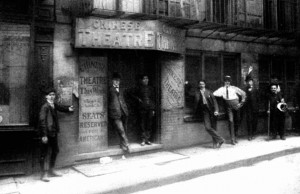 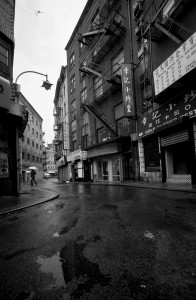 The Chinese Theater on Doyers Street was opened in 1893 to serve the cultural needs of the Chinese-American community who overwhelmingly resided in the area. This Theater in Chinatown was the first Chinese theater opened on the east coast of the United States. The next closest theater was in San Francisco. The Chinese Theater possessed a small stage with wooden benches for guests. Overtime, the Theater began attracting patrons of all ethnicities as New Yorkers gained interest in Chinese art forms.

In 1905, the Theater's cultural importance was overshadowed by violence between two rival Chinese gangs. After an evening of watching "The King's Daughter," four On Leong Tong members were shot by several members of the Hip Sing Tong. Before the shooting, the two gangs had been competing against one another for years over gambling, prostitution, and drugs, but large scale violence was rare. That changed when Mock Duck, a Chinese-American from San Francisco, came to New York to gain power over the traditional Chinese organized crime in the area. Most people believe he ordered the attack that launched a war between the two gangs. The war would last for years until both gangs realized that they were ruining business for themselves because patrons were too afraid to come down Doyers Street, which included going to the Chinese Theater.