The monument honors 92 of the men who fought on behalf of the Confederacy. The monument was created in 1948. 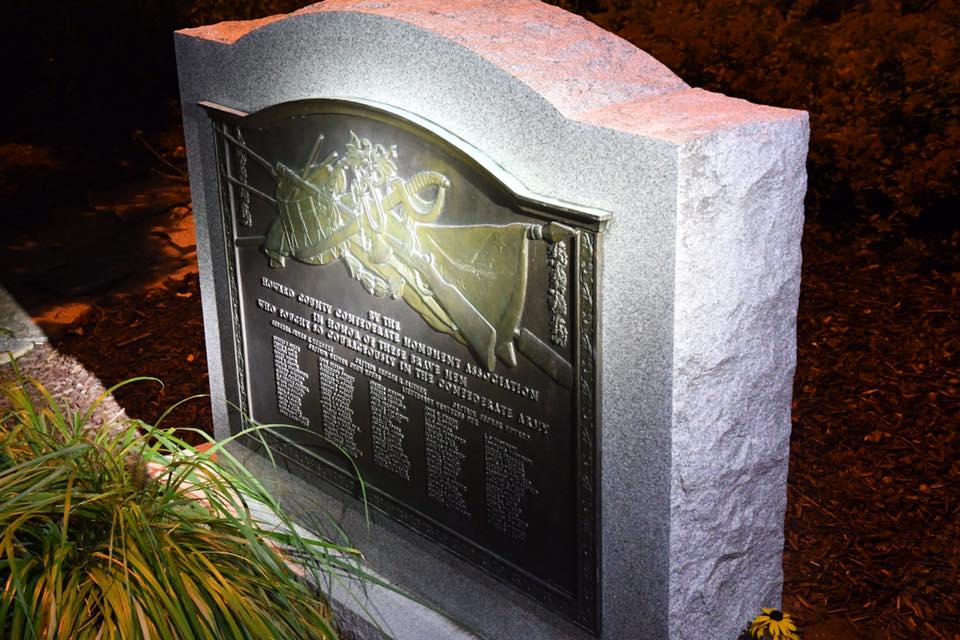 Steel engraving created c. 1862: "Attack on the Massachusetts 6th at Baltimore, April 19, 1861." The Howard County Dragoons, some of whom are remembered on the Ellicott City monument, fought to restore order during this riot. 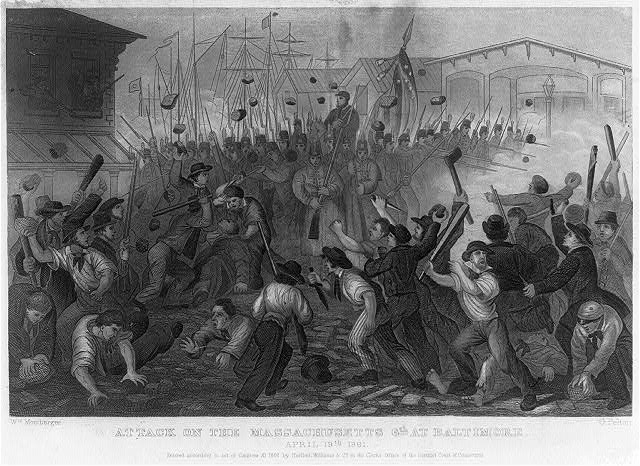 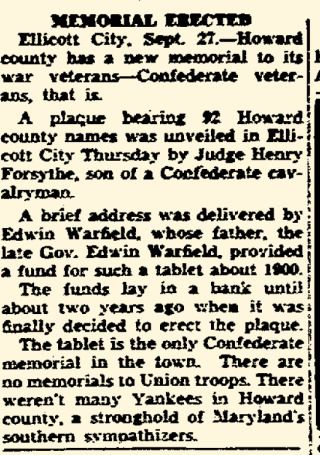 George Riggs Gaither and the Howard Dragoons
During the Baltimore riot of April 19, 1861, a group of secessionists launched attacks on both soldiers and civilians. In an attempt to restore peace, George Riggs Gaither rounded up the Howard Dragoons, the local militia he led consisting of landowners who were more accustomed to participating in drills and parades than fighting in actual conflicts. Following the riot, however, Gaither and most Dragoons ultimately refused to swear allegiance to the United States and instead traveled south to fight for the Confederate Army. Gaither joined the 1st Virginia Cavalry. He was promoted to captain and then taken prisoner at the 2nd Battle of Manassas. Soon afterward, he was exchanged and returned to the battlefield. After the Civil War, Gaither became a cotton trader, though he also remained active in Maryland's militia until his death in 1899.

Dedication of the Monument
As historians have demonstrated, many Confederate monuments were created by whites during the early 1900s and the modern civil rights movement- two periods when African Americans were challenging their status as second citizens. This monument demonstrates a connection between these two periods, as white residents began the effort to create the monument in 1900. After more than four decades of dormancy, the effort to raise funds for a Confederate monument was restarted in 1947- the same year that African Americans in Maryland challenged racial segregation in colleges and other establishments.

Removal of the Monument
This monument was one of many to be taken down following the white supremacist rallies in Charlottesville, Virginia in August 2017. Just prior to its removal, people gathered to protest its continued presence. At this gathering, African American Community Roundtable President  Larry Walker said that "It's time for love to conquer hate. This monument is a symbol of the hate of the past, and we as a community have moved far beyond these symbols of hatred." Upon its removal, County Executive Allan Kittleman explained, "It has become increasingly clear in recent weeks that memorials such as this are hurtful to many residents in our community and elsewhere. Given these feelings and the tragedy in Charlottesville, I felt compelled to remove this memorial from public property" (quoted in Magill, "Confederate Monument").