Stone plaque on the front of the Morgan County Courthouse. 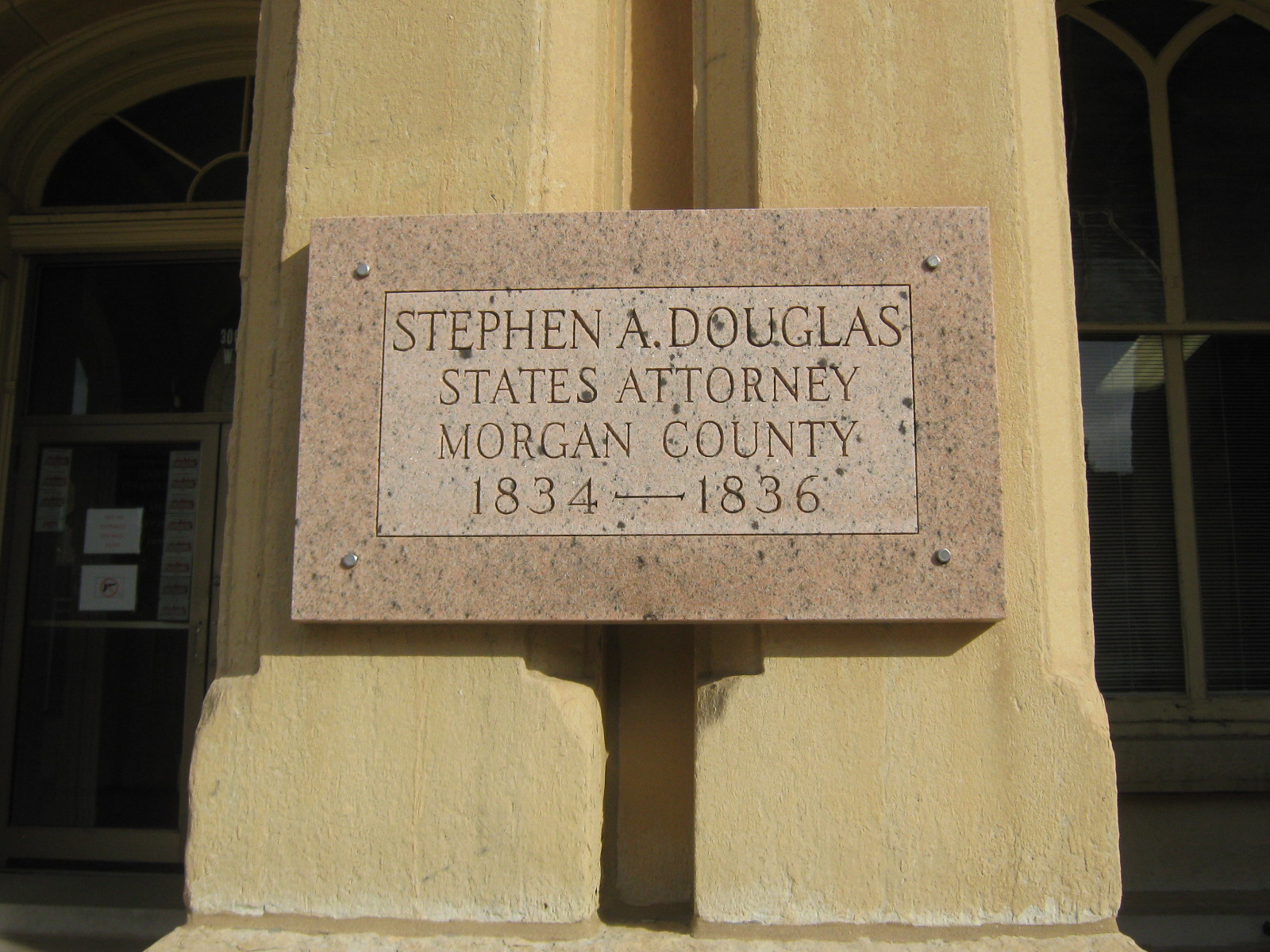 b. April 23, 1813, in Brandon, Vermont; d. June 3, 1861, in Chicago, Illinois. Douglas and his family settled in upstate New York in 1830. Douglas attended the Canandaigua Academy before leaving in 1833 to study law with a local attorney. In November 1833, Douglas moved to Jacksonville, Illinois, but soon moved to Winchester, Illinois, after receiving a schoolmaster position. The following spring, he returned to Jacksonville and received his law license. In 1835, the general assembly appointed him as state's attorney for the First Judicial Circuit. He also became involved in Democratic party politics. Voters elected Douglas to the state legislature in 1836, and in the same year, he accepted the position of Register of the Land Office in Springfield, Illinois. After losing a bid for the United States House of Representatives against John T. Stuart in 1837, he became chairman of the Democratic State Committee and effectively the manager of the Democratic Party in Illinois.
In 1840, Douglas was appointed Secretary of State and used his position to lobby for an expansion of the Illinois Supreme Court. In 1841, the legislature expanded the supreme court from four to nine members and appointed Douglas as one of the five new justices. At the age of twenty-seven, he became the youngest person to have served on that court. The legislature divided Illinois into nine judicial circuits with each supreme court justice presiding over a circuit, and Douglas was responsible for the Fifth Judicial Circuit. In 1843, voters elected Douglas to the United States House of Representatives where he advocated a strong expansionist policy and twice won reelection.
In 1847, the Illinois General Assembly elected Douglas to the United States Senate, where he became Chairman of the Committee on Territories. He moved to Chicago that same year and invested in area real estate. It was largely through his efforts that the Illinois Central Railroad, which ran from Galena to Cairo, expanded to link Chicago with Mobile, Alabama. In dealing with the sectional controversy over how to regulate slavery in the territories, Douglas articulated the principle of "popular sovereignty." This attempt at a compromise on the slavery issue ultimately contributed to the division of the Democratic party. In 1858, he won reelection to the United State Senate over his opponent Abraham Lincoln. This heated campaign included the famous Lincoln-Douglas Debates that gave Lincoln national recognition. In 1860, Douglas ran against Lincoln for the Presidency. However, the Democratic party split. Democrats in northern states generally voted for Douglas, while those in southern states voted for John C. Breckinridge. After the election, Douglas served on the Committee of Thirteen and supporting the ill-fated Crittenden resolution in an attempt to save the Union. He voiced his support for the Lincoln administration, and on April 25, 1861, he delivered one of his most famous pro-Union speeches in Springfield, Illinois, at the state capitol building. He contracted typhoid fever and died shortly thereafter.