One of several visitors centers in the vast Redwood National Park, this small ranger station includes a number of markers and exhibits related to the history of the park in addition to information about nearby trails. The park is a string of protected beaches, forests, and grasslands along Northern California’s coast that preserves the remnants of a forest that once covered two million acres. American Indians made the redwood forests and associated ecosystems their home for thousands of years. The area was in danger owing to over harvesting of trees and other industries. Organized in 1918, Save the Redwoods League and other associated conservationists worked to preserve the area prior to the creation of the park in 1968.

The National Park Service and the State of California manage the Redwood forests which run along the Pacific Coast. 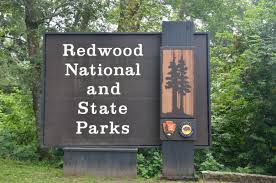 Redwood trees are the tallest living things on earth. 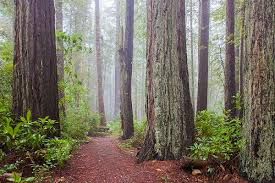 For thousands of years, the native people of the North Coast region have made the redwood forests and associated ecosystems their home. These American Indians held numerous and distinct identities and spoke many different languages. American Indians had adapted well to this environment prior to Euro-American contact. The American Indians profound religious beliefs, languages, extensive knowledge of the natural world, customs, and perseverance continue to be a source of admiration for other cultures.

American Indians in the region belonged to many tribes. Traditional homes of the region's American Indians were constructed of planks split from fallen redwoods. A house was understood to be a living being in which the redwood that formed its planks was itself the body of one of the Spirit Beings. Spirit Beings were believed to have taught people the proper way to live and were considered to be a divine race who existed before humans in the redwood region.

In 1850, outsiders moved into the area in overwhelming numbers after gold was discovered along northwestern California’s Trinity River. The initial contact with native peoples was gruesome in which the American Indians were pushed off their land, hunted down, scorned, raped, and enslaved. Many American Indians tried to resist but their resistance resulted in the bloodshed of their people. In this part of California, treaties that normally allotted American Indians reservations were never ratified. Although treaties were signed, the California delegation lobbied against the treaties on the grounds that the Indians were given too much. Reservations were thus established by administrative decree rather than by treaty.

Today, the descendants of these American Indians continue to live on and off reservations in the redwood region. Tolowa, Yurok, Hupa, and Karuk are still living languages spoken yet by a handful of cherished elders and being taught to the young. Despite the dreadful history of the past 150 years, the American Indian community of northwestern California has persisted. While some American Indians live on reservations, near or on the land of their ancestors, others live in local towns and cities.