This local African American history museum opened in 2015 but its roots date back to 2008, when city administrator Greg Dietterick and others began efforts to create the museum. Dietterick w inspired by a desire to learn more about Seneca Junior College, a historically Black educational institution that operated from 1899 to 1939. Dietterick wanted to preserve the story of the college and use that history as a gateway to exploring the larger history of African Americans in Oconee County. With many supporters in the African American community and the eventual support of the city council and others, Dietterick was able to oversee the construction of the Bertha Lee Strickland Cultural Museum between 2014 and 2015. Exhibits include artifacts related to area schools and colleges for African Americans as well as exhibits related to Black-owned businesses, churches, and important people and institutions in the Black community.

The new museum opened in 2015 thanks to the support of the Seneca City Council. The Bertha Lee Strickland Cultural Museum is owned and operated by the City of Seneca. 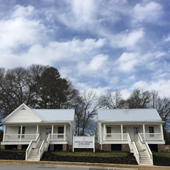 The museum is located at the renovated home of Bertha Lee Strickland, who was a housekeeper and caretaker for Dr. W.J. Lunney and his family. Visitors can also tour the Lunney family home which has been preserved to match its early 20th-century appearance. Prior to Strickland living at this home, it was used as a residence for faculty at Seneca Junior College.

The City of Seneca purchased the property in 2009 from one of the sons of Mrs. Strickland. Plans for the museum continued as Dr. John Martin, Director and Curator of the Lunney House Museum, joined the project and worked to make Mr. Dietterick’s idea reality with the support of the African Americans community and civic leaders.

In 2012, Dr. Martin met Shelby Henderson who worked for the Chamber of Commerce. Because of their meeting, Ms. Henderson became interested in both the Lunney House Museum and the Strickland Museum. One year later Ms. Henderson made a proposal and then presented it to the City of Seneca sometime in 2013. Her proposal requested that the Preservation Group be approved to “ensure the integrity and authenticity” of the Bertha Lee Strickland Cultural Museum. The City Council eventually approved the proposal and Ms. Henderson became the museum's manager for both projects.