This historical marker was dedicated by the Wisconsin Historical Society in 1990. The marker offers a concise history of the Brothertown Indians, descendants of the Pequot and Mohegan Nations. These Native peoples came to the area from southern New England, after being forcibly removed multiple times. The tribe was first forcibly removed to upstate New York only to be pressured to move west by the government despite the tribe's efforts to assimilate into the dominant culture and economic systems. In 1831, members of the tribe purchased land in this area and arrived in Wisconsin via the port of Green Bay. This area is still home to the descendants of these migrants, and the Native America community of Brothertown Indians includes about 1600 members, the majority of whom reside within a short drive of this marker. Despite multiple attempts by members of the tribe, which include additional members on the tribal rolls who live outside of this area, the federal government has not extended official recognition to the tribe or its people.

The Brothertown logo is what the nation uses to identify themselves as an individual nation. This is a tool used to express their sovereignty despite the lack of federal recognition.

This is the historical marker that explains the history of the Brotherton nation, and how they came to live in Wisconsin. 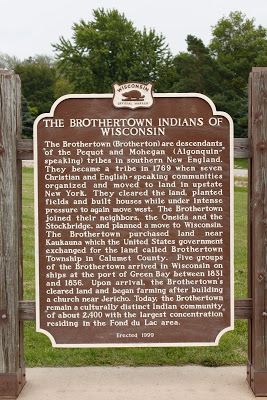 Brothertown Indians are descendants of the Pequot, Mohegan, Niantic, Narragansett, Montaukett, Tunxis nations. Eeyamquittoowauconnuck is the tribe's traditional name, and this is the name members identify themselves with although most use the name "Brothertown Indians" as an abbreviated name that connotes their unique history of resettlement in this part of Wisconsin. The members of this tribe date their immediate history back to the 18th century when tribal leader Samson Occom guided members through several forced removals and worked to create what they hoped would be a permanent home in New York. the tribe was later forced to the eastern shores of Lake Winnebago in Wisconsin. At that time, they migrated with the Stockbridge-Munsee Nation as well as members of the Oneida Nation.

The members of the tribe were known as "praying Indians" in the colonial era and early republic owing to their assimilation into Christianity and acceptance of many European economic and cultural traits.