The J.B. Brown Memorial Block is a beautifully preserved commercial block that stretches along Congress Street and has been a center of business activity in Portland from the time of its construction in 1883 to the present. The J.B. Brown Block represents a unique downtown design as it is one of only a few to feature the Queen Anne style of architecture. The building's designer was none other than John Calvin Stevens, one of Maine’s most well-recognized architects and designers. 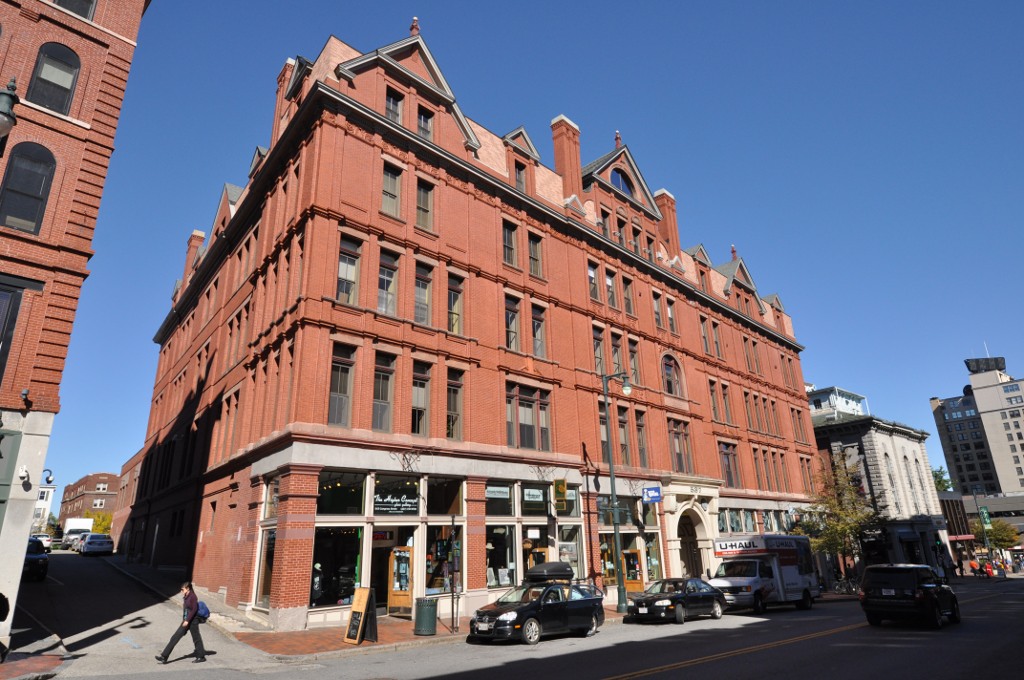 The J.B. Brown Memorial Block is named after John B. Brown who was the founder of the Portland Sugar Company in the year 1855.  Despite the fame of the Portland Sugar Company, Brown’s greatest contribution to the City of Portland was the construction of the Falmouth Hotel, which became a major social center for the City for the next 50 years.  The Block was designed by John Calvin Stevens, whose legacy in the city is without contest architecturally.

John Calvin Stevens was born in the state of Massachusetts but moved to Maine with his family at the age of two. Growing up in Portland, Stevens would graduate through the Portland Public school system of the mid-1800s.  His family was not rich, and as a result, he chose to apprentice under notable Portland architect Francis H. Fassett.  Stevens excelled in this apprenticeship which led to Fassett placing Stevens in charge of his new Boston office.  During his time in Boston, Stevens would meet and be significantly influenced by a number of other architects who would go on to design great works within the United States.  Of particular relevance to the J.B. Brown building was his colleague and friend William Ralph Emerson, whose work was largely in the Queen Anne Style that the J.B. Brown Block would later be designed in.

After returning to the Portland area in the mid 1880s, John Calvin Stevens formed his own architectural firm and simultaneously began working on a book that would make him recognized worldwide.  Stevens drew detailed sketches and designs for Examples of American Domestic Architecture which he co-authored with Albert Winslow Cobb, his business partner and friend.  This book explored the style that would come to characterize and be characterized by Stevens throughout his career: The Shingle Style.

For the rest of his career as an architect, Stevens worked in Maine designing libraries for many of the biggest towns in Maine, and working on a great number of iconic buildings in the City of Portland.  Many of the most recognizable buildings in Portland bear his signature somewhere in their design.  His influence on the City was so significant that in 2009, October 8th was declared “John Calvin Stevens Day,” marked by a Congressional Record of Recognition which was presented by Senator Olympia Snowe.

The J.B. Brown Memorial Block was constructed around the middle of John Calvin Stevens career.  It was designed in the style his mentor and peer William Ralph Emerson had taught him, the Queen Anne Style.  The Queen Anne Style is recognized for having picturesque qualities, creatively blending asymmetry with an attention to detail that makes the style stand out.  Additionally, it is one of the few buildings in the City of Portland in this style, making the J.B. Brown Memorial Block stand out as a unique testament to the skills of its designer.