The fieldhouse, which opened March 1, 1955, is named for Forrest C. "Phog" Allen, longtime basketball coach who played for and was trained by James Naismith, the game's founder, a longtime KU professor of physical culture and its first basketball coach. The fieldhouse and its basketball court, now named for Naismith, superseded the facilities at the original Robinson Gymnasium, built in 1907 and razed in the late 1960s, and Hoch Auditorium, where games were played from 1927 to 1955. Like those facilities, the fieldhouse also has been the site of concerts and university functions.

Allen Fieldhouse remains one of the most historically significant sports venues in America. 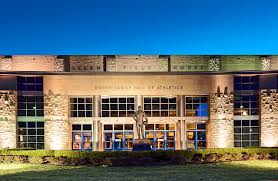 Wilt Chamberlain may be the most famous Jayhawk to play in the auditorium. During his time in Lawrence, he helped integrate the city's restaurants and theaters. You can read about this in Aram Goudsouzian's article, "'Can Basketball Survive Chamberlain?': The Kansas Years of Wilt the Stilt" by clicking on the link below.

The venue also pays tribute to Dr. James Naismith, the inventor of basketball and former coach at the University of Kansas. This entry includes an embedded video that contains the only known recording of Naismith's voice. In this clip, recorded for a 1939 radio broadcast and recently discovered by a KU professor, Naismith describes setting up peach baskets to serve as goals for an experimental game of "basket ball" at a YMCA in Massachusetts in 1891.