Douglas County was established on May 15, 1854, and was named after Illinois Senator Stephen A. Douglas. Those familiar with the history of the late antebellum period may find this somewhat ironic given Douglas's willingness to appease the South, a point of view that ran contrary to the growing Free Soil orientation of Lawrence settlers. While Topeka became home to the Free State legislature, Lawrence was home to many of the leading opponents of slavery's extension in the years leading up to the Civil War. Unlike most counties, Douglas County did not have an official courthouse and its county officers met in rented spaces until city officials and boosters decided that Lawrence needed a dignified courthouse. Completed in 1905, this courthouse was funded through a real estate tax.

Authorized by a local referendum in 1899, Douglas County Courthouse was built between 1903 and 1905. 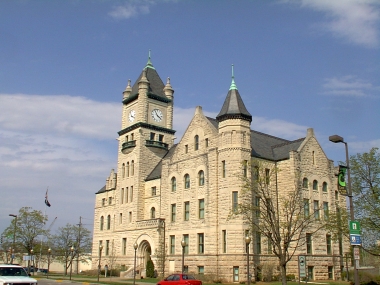 Although Douglas County was one of the first counties organized, as well as one of the largest and most prosperous counties, it did not have a courthouse at the close of the 19th century. In 1899, voters approved an increase to their property taxes that helped fund the creation of this courthouse. Local banker and city father J.B. Watkins donated the land for the courthouse. Construction began in 1903 and was completed in 1905.

Perhaps fittingly given the county's tardiness in completing its first courthouse, as well as the political tenor of Kansas in wake of the populist reform movement, there was no dedication ceremony for the building. Reflecting the sensibilities of the city's backers, county officials simply moved their offices into the completed courthouse and got back to work.