Built in 1965, the John Ferraro Building is the headquarters of the LA Department of Water and Power. It was previously known as the General Office Building of the Los Angeles Department of Water & Power but was renamed to the John Ferraro Building on November 16, 2000, in honor of Los Angeles City Councilman John Ferraro. The building itself was designed by A.C. Martin & Associates and was a bringing together of 11 disparate office buildings across the city, putting the DWP's 3,200 employees in one place. Recently, the building was featured extensively in the science fiction thriller film, Inception.

The John Ferraro Building lit up at night time. 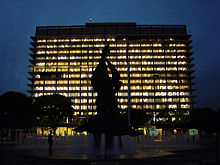 The building was renamed after John Ferraro, the longest-serving Los Angeles City Council member who served the city for more than 35 years, from 1966 until his death in 2001. He was born in 1924 to a working class family in Cudahy, a small town just south of Los Angeles. His parents were Italian immigrants, and he was the youngest son in their family of eight children.

After high school he gained a Bachelor of Science degree in business administration from the University of Southern California. He was an excellent football player and made the All-City team in 1944 and 1947 playing as a tackle. He would later be inducted into the College Football Hall of Game in 1974. He joined the Navy during World War II and was commissioned as an ensign in 1945.

By 1951, Ferraro was an insurance broker with the John Ferraro Company. He invested shrewdly in stocks and real estate and became a millionnaire. He married State Senator E. George Luckey's daughter, Julie Marie Luckey, and they had a son together in 1956. By 1972 the couple had divorced, and Ferraro met his second wife, Bridget Margaret Hart - a well known exotic dancer and strip tease from the 1940s who went on to become a legitimate actress.

His first governmental role was in 1953 when he was appointed to the Police Commission. He served in this role for 13 years, during which he was a strong advocate for gun control and aimed to improve race relations. In 1966 he was appointed to represent L.A. Council District 4 following the death of Harold A. Henry. He made two unsuccessful attempts at other council roles: in 1974 he ran against Edmund D. Edelman to be on the L.A. County Board of Supervisor and lost; in 1985 he ran for mayor but lost hugely to Tom Bradley.

In 1977 he replaced John Gibson as the city council President which gave him greater control over the council's agenda. This was the second most powerful position in the city, making him acting Mayor whenever Tom Bradley was away. Some of his notable actions included:

Ferraro was diagnosed with cancer of the spleen in August 1999 and underwent treatment. He died a year later at the age of 76 in Santa Monica on April 17.